Sorry for the lateness of this post, one of those days I’m afraid.

Italian borrowing costs were seen rising overnight as the country moved into a second day of auctions of  bonds and bills.

Although these number are way down from the heady heights of late November yields, across the Italian curve yields have been rising since the end of March. The Italian authorities, ignoring yesterday’s message from the Spanish, blamed contagion for the higher yields.

Interestingly, however, the movement of Italian and Spanish debt markets in unison isn’t all that uncommon. 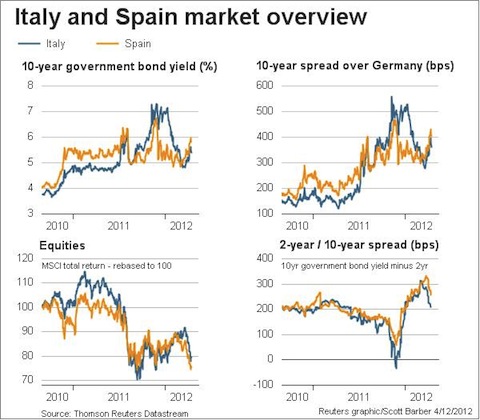 In a positive sign yields have been falling since the auction. Apart from the obvious problem of bond investors losing money as yields rise, the major issue with the new uptrend in Spanish and Italian yields is something Imentioned on Wednesday:

Spanish banking capital isn’t going to be helped by the fact that they purchased €68 billion worth of Spanish government bonds in an artificial market that are now falling in value. Italian banks have also been participating in similar action,

Overnight I noted the that Ambrose Evans Pritchard reported on the issue:

Credit experts say the Spanish and Italian banks are trapped with large losses on sovereign bonds bought with ECB funds under the three-year lending programme, or Long-Term Refinancing Operation (LTRO).

Andrew Roberts, credit chief at RBS, said Spanish banks used ECB funds to purchase five-year Spanish bonds at yields near 3.5pc in February and 4.5pc in December. The same bonds were trading at 4.77pc on Wednesday, implying a large loss on the capital value of the bonds.

It is much the same story for Italian banks pressured into buying Italian debt by their own government. Any further dent to confidence in Italy and Spain over coming weeks – either over fiscal slippage or the depth of economic contraction – could push losses to levels that trigger margin calls on collateral.

A quick check of the ECB’s weekly financial statement  tells me there has been a recent uptrend in margin call activity, but nothing of any magnitude to be concerned about. However, as reported above, a return to yields seen back in November 2011 would see a scramble by the banks for new collateral. With peripheral Europe coming under increasing pressure due to issues in the real economy it is an open question as to how yields are going to be maintained at a level similar to those of LTRO induced purchases.

Mr Coeure, the ECB board member in charge of market operations, said the central bank still had the Securities Market Programme (SMP) in place allowing it to purchase debt of euro zone nations, should the need arise.

“We are seeing today growing signs of normalisation on a whole group of market segments … but the situation in recent days shows that this normalisation remains fragile,” Mr Coeure told a conference in Paris.

Referring to Spain, where sovereign debt yields have spiked amid concerns over the government’s ability to cut its deficit, Mr Coeure said: “The political will is there, which makes me think that what is happening at the moment in the market does not reflect the fundamentals.”

Feel free to check out Spain’s fundamentals here and here.

Speaking of the ECB, the monthly bulletin for April was published yesterday  focussing mostly of February data. The document is below and is very comprehensive for those of you who are interested in the details. In my opinion the most important data reported in the document is private sector credit issuance because without it austerity driven government budgets in much of the European periphery are going to lead to shrinking economies. Although the data isn’t reported on a per country basis the trend is very obvious and it would appear that the private sector of periphery Europe continues to deleverage at pace while the demand for credit in other regions is very weak:

More bad news for periphery banks I am afraid. Full report below.