Matt Stoller is a fellow at the Roosevelt Institute.  You can follow him at http://www.twitter.com/matthewstoller.

Last month, I reported on two amendments put forward in the House Financial Services Committee which would substantially limit the undemocratic power of the Federal Reserve and the national bank regulator, the Office of the Comptroller of the Currency.  They would subject these agencies to the regular appropriations process, meaning that Congress could cut off their funds if there were policy disagreements.  Right now, the OCC gets its money from banks and the Fed prints its own budget (nice work if you can get it).  The amendment put forward to bring the OCC into line with democracy was offered by Rep. Brad Miller, and it lost by a vote of 22-35.  The Fed amendment lost by a vote of 24-33.  What’s interesting, though, is that while Barney’s amendment on the Fed lost in a straight party line vote, Miller’s OCC amendment would have won if the seven Democrats who voted against it had voted for it.

In other words, protecting the OCC and the big banks can be laid at the feet of both the Republicans on the committee AND the seven Democrats who voted with the GOP.  These members are Mel Watt, Gwen Moore, Ed Perlmutter, Joe Donnolly, Jim Himes, John Carney, and Gary Peters.  Four of those members are in the New Democrat Coalition (Himes, Peters, Carney, Perlmutter), two are Congressional Black Caucus and Congressional Progressive Caucus members (Watt, Moore), and one is a Blue Dog (Donnolly).  Jim Himes is particularly worth noting – he’s a smooth and handsome former Goldman Sachs employee from Connecticut who ran for Congress and won in 2008, and hired a former UBS lobbyist as his chief of staff.  Ed Perlmutter, another New Dem, literally owned part of a bank that had been sanctioned for unsafe and unsound practices.  Mel Watt, the Congressman from Bank of America, fought against a Fed audit until he was soundly thrashed by Ron Paul and Alan Grayson in committee.  Watt’s banking staffer, Sanders Adu, shortly departed to head Federal lobbying for Wells Fargo.  It’s a pretty business as usual lot.

But now they, as well as the Republicans, are on the record supporting the bank-friendly OCC.  And four of them, Donnolly, Himes, Peters, and Carney, as well as most Republicans on the committee, are on record supporting the Federal Reserve’s right to print money to fund itself.  The person they were protecting, in the vote for the OCC, was this woman, Julie Williams. 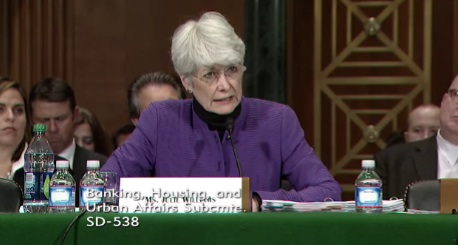 Williams is the Chief Counsel for the Office of the Comptroller of the Currency, and that’s her testifying in December, 2011 to the Senate Banking Committee on the OCC’s approach to foreclosures.  Her most recent feat of evil is the foreclosure review process (which one whistleblower has called a sham), where she hired consultants to review foreclosures who had previously been credit risk managers on the predatory loans that are now in foreclosure.  Some of these firms even “scrub files” on behalf of the banks themselves.  Of course, the corrupt shadow regulator the Promontory Group is in the mix, since Promontory has loads of former OCC-employees on its payroll (and was in fact founded by former OCC Chief Gene Ludwig).

According to Senator Jeff Merkley, the OCC tried to keep these consultants secret and then failed after public pressure forced them to divulge the consultants involved in the reviews.  Williams, of course, probably lied about it to the Senate.  In other words, Julie Williams is basically the Lex Luther of the bank regulatory community, overseeing the preemption of state and local lending laws that allowed the housing bubble to blow out, and now running and defending the “foreclosure review” process that the OCC is using to cover up servicer fraud from the banks.  The OCC, remember, is responsible for the safety and soundness of national banks, which means that the failure of most (though not all) of the big ones, including Countrywide (until late 2006), Bank of America, and Citigroup, can be laid at the feet of the OCC.

The OCC has a new head, Thomas Curry, who was just confirmed by the Senate.  I’m told that he’s a respectable regulator with integrity, but that he’s a bit cautious.  I suspect that if he’s going to succeed in reigning in a bank regulator that is renowned for a track record of catastrophic failure, Williams will have to either be fired or marginalized.

In order to regulate banks like JP Morgan effectively, you need regulators who are willing to do so.  As long as Julie Williams is with the OCC, we can be sure that she’ll do everything in her power to make sure the will won’t be there for a serious approach to dealing with the problems in our banking system.