We normally limit our awards of the of Frederic Mishkin Iceland Prize for Intellectual Integrity to academic work, since the economics discipline seems increasingly to hew to the James Carville theory of motivation: “Drag a hundred-dollar bill through a trailer park, you never know what you’ll find.” However, we’ve been unduly narrow in considering who might be deserving of this recognition, so we are bestowing the award to Promontory Financial for its work on MF Global.

Despite our publication of Academic Choice theory, which provides more formal support for the Inside Job observations, we’ve seen perilous little in the way of a change in attitudes from within the academy. So to make a wee additional contribution on this front, we are inaugurating the Frederic Mishkin Iceland Prize …

The reason for highlighting the intellectual integrity, or more accurately, the absence thereof, among many well paid academic economists it that they are paid well to say good things about dubious policies and organizations.

A direct analogy to the Mishkin paper praising Iceland’s financial system is reviews produced by private consultants acting as supposedly independent reviewers, or what amounts to an outsourced regulatory function. The glaring problem with this construct is that the reviewers are hired by the companies that need to get a clean bill of health in the end. Adam Levitin described how this works in the context of the OCC foreclosure reviews, which operates on this template:

By far the most interesting bit in the draft C&D [cease and desist] order is the bit requiring the banks to engage independent foreclosure review consultants to review “certain” foreclosures that took place in 2009-2010. There is no specification as to which foreclosures are to be reviewed or precisely what the standards for review are. But that’s all kind of irrelevant. Who do you think the banks are going to engage to do these reviews? Someone like me? Not a chance. They’re going to find firms that signal loud and clear that if they get the job, they won’t find anything wrong. It’s just recreating the auditor selection problem, but without even the possibility of liability for a crony audit.

Frankly, this sort of regulatory outsourcing is pretty astounding–the OCC has resident examiner teams at the major servicer banks. Shouldn’t they be the ones auditing the internal controls and performance, not a third-party compensated by the bank?

Now to the immediate example, Promontory Financial. The firm is deeply involved in the OCC foreclosure reviews and also the author of a glowing report on MF Global’s risk controls in May of 2011, a mere five months before the firm failed. Promontory has managed to establish itself as a blue chip provider of post scandal review processes (it’s often hired by boards to do forensics after rogue trader scandals). It was founded by former Comptroller of the Currency Gene Ludwig and has many former regulators on its staff. That’s a tad ironic, since one of its bread and butter businesses is based on regulatory arbitrage. Promontory is in the business of brokering deposits, which is taking deposits that exceed the FDIC limit of $250,000 per institution and spreading them around so as not to exceed the limit. It’s not clear why this should be allowed. Well off people can achieve the same results by buying bank certificates of deposit, or if they want liquidity at low risk, they can buy Treasury bills. The FDIC is not prone to pointed statements, but you can clearly see the agency’s polite unhappiness about this practice and Promontory’s role:

Despite the regulatory scrutiny that brokered deposits have received since the savings and loan crisis, the use of deposit brokers is recognized as a legitimate method of obtaining deposits. Although many brokers specialize in locating for their customers the highest rates of interest that are being paid on certificates of deposit, our discussion here concerns the subset of brokered funds that are used to expand deposit insurance coverage beyond the normal limits to much higher levels. The insurance-related risks associated with this form of brokerage are familiar. First, this form increases the exposure of the federal deposit insurance fund. Second, this form of brokerage does not subject banks to the market discipline that is ordinarily brought to bear by larger depositors when they are unable to obtain full insurance coverage….

Brokered deposits seemed to gain some respectability when the Promontory Financial Network (Promontory) launched the Certificate of Deposit Account Registry Service (CDARS) in January 2003. Promontory was founded by former Comptroller of the Currency and former FDIC board member Eugene Ludwig. Its board of directors includes a former vice chairman of the Federal Reserve Board, Alan S. Blinder, and a former FDIC chairman, L. William Seidman. Even though the principals of Promontory are quick to contrast their program with traditional brokered deposits,24 a skeptic could just as quickly disagree and argue that the system is nothing more than a well-connected brokered-deposit service. Nevertheless, the new service has met with approval from most observers.

Promontory was engaged by MF Global as part of a 2009 settlement agreement with the CFTC over alleged wheat futures trading abuses involving a former employee. The Financial Times obtained a copy of the May 2011 presentation via a Freedom of Information Act request (separately, I’m appalled that any regulator would consider a short Power Point presentation to be an acceptable end product. Consultants have done a great job of training client to accept deliverables that are less than complete). The document extols the leadership of Jon Corzine, who took charge in March 2010 (click to enlarge). 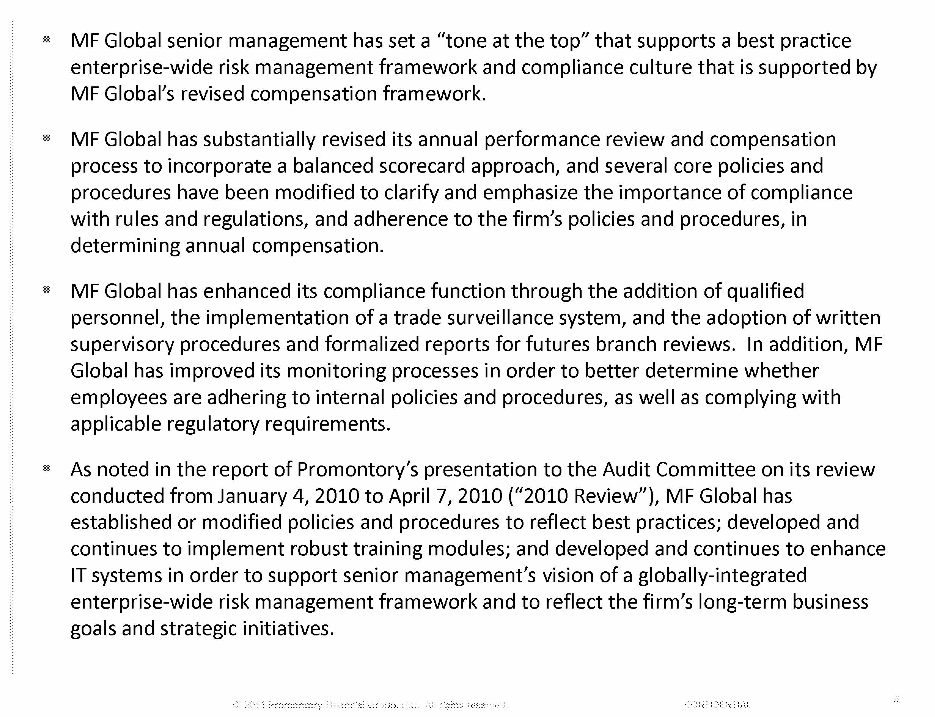 Promontory responded to the Financial Times by asserting that its assignment was narrowly focused and that its services were unrelated to sovereign debt trading or controls for segregated accounts. Yet Promontory said it only reviewed reports of risk committee and operational risk committee meetings in October, November, and December 2010, and also reviewed the meetings of the credit risk committee. That is inconsistent with its description of the scope of its work per the May document (click to enlarge):

The red flags raised by the fired chief risk officer, Michael Roseman, took place during that period. His February 2 Congressional testimony discussed how MF Global’s exposure to Italy, Spain, Portugal, Ireland, and Greece were $500 million total in March 2010, and he began receiving requests to raise the limits. He acceded to Corzine on a $1.0 billion total gross limit on exposure. By mid-September, the total positions had grown to between $1.5 and $2.0 billion, and the firm started to consider repo to maturity transactions as a way to boost earnings (the Italian government bond trade that played a key role in bringing down the firm was an RTM transaction). Roseman was now uneasy.

By late October, the positions ranged between $3.5 and $4.0 billion and Roseman was asked to increase the total limit to $4.75 billion. He was concerned about liquidity risk, but his risk scenarios were dismissed as implausible by Corzine and some board members. The Board
eventually approved the request to raise the limits. In January 2011, Roseman was fired and the role was redefined to make it less powerful.

It’s pretty hard to swallow that Promontory was not aware of the Roseman contretemps. The ouster of a chief risk officer is a major step and the downgrading of the role stands in direct contraction to Promontory’s claims that the “tone at the top” was supportive of tough risk management and controls. Firing Roseman over standing in the way of what was hoped to be beefing up a profitable trade and making sure his successor would not be able to make similar waves send a powerful message throughout the firm as to what really counted, and it wasn’t worrying about risk.

So the firm that gave an “all clear” review to MF Global is at the heart of the OCC foreclosure review process, and it isn’t hard to imagine it will give its bank cronies a pass too. That’s what you’d expect of a system that is run by the elites for the elites.