Whales can adjust their hearing BBC

Looks Matter More Than Reputation When It Comes to Trusting People With Our Money Science Daily (Aquifer). Quelle surprise!

‘If We Leave the Euro, Everything Will Be Worse’ Der Spiegel

Cost of Greek exit from eurozone put at $1tn Guardian

Whites Now Account for Under Half of Births in U.S. New York Times

White House Steps Up Push to Toughen Rules on Banks Wall Street Journal. This part is funny: “White House officials have intensified their talks with the Treasury Department in the days since J.P. Morgan’s losses came to light.” Translation: “White House tells Geithner he has to do a more convincing job of not looking like the banks’ water boy.”

‘London Whale’ Said to Be Leaving JPMorgan New York Times. Wonder why that took so long.

A week is a long time in politics. –Harold Wilson, of all people

G8 Summit. Camp David is in MD, near Thurmont. The nearest large town is Frederick. OccupyFrederick and OccupyBaltimore seem to be holding the scheduled events. An anonymous farmer in Thurmont is letting Occupy Baltimore camp on his land. Statement from Sherriff Chuck Jenkins of Frederick County. “There has been a recent trend toward flash mob protests.” Bucolic. There will be drones, so Obama should feel comfortable. Protest photography, with useful tips.

NATO summit. Multiple sources telling TimCast Chicago NATO people will lose cell service. Standard Operating Procedure 303 gives “state homeland security advisors” the power to call for the “the termination of private wireless network connections.” Of course a National Emergency is whatever Obama wakes up in the morning and says it is. (Interestingly, the chance of “mobile phone service gaps” near Thurmont was one reason the G8 people didn’t march on Camp David.) Iraq Veterans Against the War organizer Aaron Hughes will be leading a column of veterans this Sunday where he’ll be returning the service medals he earned in Iraq. Media Operation in a Wicker Park loft (including live coverage of #99SBus Occupy buses arriving). (Interesting to see links to IndyMedia in local press coverage.)

Buses from Albany, Atlanta, Burlington, Detroit, Los Angeles, Minneapolis, New York City, Philadelphia, Portland, Providence, and Washington, D.C. are expected. “Protesters from all walks of life — from unemployed construction workers to dumpster-diving former cycle messengers and paramedics to a tech millionaire who helped lead the 1989 student protests in Tiananmen Square — are along for the ride.” Housing unclear, but the Wellington Avenue United Church of Christ will take as many as the church can hold. “As the first #OWS bus pulls into Chicago, an announcement that if the media wants comments, we use progressive stack. #99SBus” Awesome.

“Nobody in November will remember what happened,” an Obama team source told me. It will be a short news cycle on the cable outlets “and a month in the [Chicago] papers.” Oh?

Green Party. SF debate, Stein: “We do not have a functioning press. We have an o-press. We have a re-press.” Barr: “If they could just leave the Democratic Party and register as Greens, they could still vote for Obama but it would be sending the Democratic Party itself a message it needs to hear.” Pacific Green Party in danger of losing OR ballot status. HI Convention this Saturday.

CO (Swing State). Camping ban could mean OccupyDenver’s days are numbered (MR). Loveland, CO approves a drilling moratorium. (Outcomes like this take a lot of work, and courage by officials as well.)

IA (Swing State). Three of the Catholic Worker activists who got arrested at Obama’s HQ for NATO were from IA. Nuclear energy bill stalls in IA Senate (Dee). U-235, baby, U-235? No? Did Rs give the Register a make-good for going with FOX for their debates, and then renege? (Dee)

MI (Swing state). “Follow the money” in the Detroit consent agreement; it’s interest, not pensions, that are the killer. That’s off the table, though.

VA (Swing State). Wood County, bellwether county. (What is a bellwether? Do they exist anymore, or have they gone digital?) Uranium briefing scheduled in Virginia Beach. U-235, baby! U-235!

WI (swing state). Absentee ballot mailing delayed. Brad Blog: Watch for dirty tricks soon. Walker dislikes job numbers, so puts out his own. Obama and Romney are tied. But Obama has no coat tails. “Voters prefer to keep the current collective bargaining law rather than return to what it was prior to last year, by a 50-43 percentage point margin”. The margin is the size of Walker’s lead. Pierce: “By citing the ‘civil war] as the reason for voting for him, and without, I believe, intending to do so, Barrett makes all those people standing in the cold last January marginally complicit in what he says as the problem the recall was meant to solve.” So, when GOTV is key, and the national Ds won’t give them any money, the state Ds could manage not to fire up but to chill off the exact same people that got them their recall election in the first place. I say bring in Ilya Sheyman’s team! Washington Generals….

Inside Baseball. The joke Jimmy Kimmel didn’t tell. Grand Bargain™-brand cat food watch: The Peterson Foundation’s selfless generosity to DC influencers, including many weasel Ds (sorry for the redundancy). There is an alternative. Obama says he won’t allow U.S. debt ceiling crisis repeat. Boehner says he will allow it, and he’ll like it. Harry Reid: “We’re not going to do [the nuclear option] this Congress”. Obama Super PAC hires… Kerry 2004 manager Mary Beth Cahill. Understatement of the millenium: “Role unlikely for George W. Bush in Romney bid.”

Prediction is difficult. Nationally, Obama and Romney are neck and neck. “The usual drill: OH and FL and a very late night.” Swing-state unemployment down, Obama’s chances up. (Could be why Romney shifted to ZOMG!! Teh Debt!!!) Except for college grads. Carter Eskew throws the unemployment stats against the electoral map and comes up with Obama 313/225.

Robama vs. Obomney Watch (this once…). Biden: “Romney made sure the guys on top got to play by a separate set of rules, he ran massive debts, and the middle class lost. So what do you think he’ll do as president?” Er, just what Obama did? Romney: “I’d like to take shipbuilding from 9 to 15 a year, by the way that will help put people to work.” Military Keynsianism is always on the table. It’s bipartisan!

Romney. Mitt Romney debt speech “ignores key facts”, even if he used a debt clock for a prop. That’s giant AP making the call on facts, even if facts are hardly the point. Romney faces headwinds from press. “How to Act Human: Advice for Mitt Romney From Inside the Actors Studio.” Meme watch: Romney advisers say 2012 is about “eHarmony versus Monster.com.”

Obama. The Non-Campaign of 2012 (BAR). Obama’s broad path to victory: Western, Midwestern, Southern, Southwestern, and Florida strategies. Letterman: Obama demonstrated “great courage and great intelligence” when he “gunned down” bin Laden, asking “what more do you want to lead your country?” Gee, I dunno. Obama can order a hit like you or me can order a pizza. Isn’t Letterman setting the bar a little low?

* 114 days ’til the Democratic National Convention ends with a light collation followed by a showing of The Exterminating Angel on the big screen at Bank of America Stadium, Charlotte, NC. Ununquadium is the temporary name of a radioactive chemical element with the temporary symbol Uuq and atomic number 114.

READERS: Again, here are the swing states: AZ, CO, FL, IA, MI, NV, NH, NM, NC, OH, PA, VA and WI. I’m very interested in any local or state links you can send me from those states about people “doing politics” that aren’t about the horserace; original reporting, not wire services stuff. Now I have help with CO thanks to MR, and Iowa thanks to TTH but there are more! 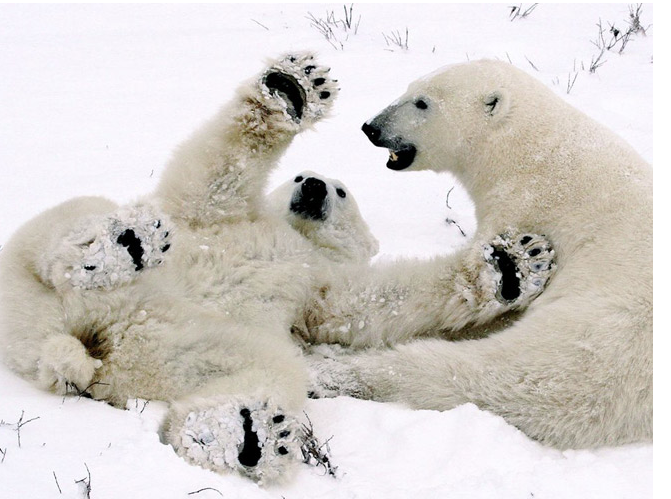