Europe is tumbling as one crisis leads to another. Economists, policymakers, and the wider public are debating a series of questions related to the crisis.

We asked these and other questions to the members of the Association of European Conjuncture Institutes (AIECE). The AIECE comprises 36 independent economic research institutes from 21 European countries. Here are some of the results as of 1 April.1

Elections in Greece on 6 May 2012 challenge the agreed reform programmes and have revived fears of a Greek exit from the Eurozone. For the first time, the ECB itself raised the possibility of an exit. Those recent events might have elevated the risk of an exit of Greece, but even beforehand the risk was present.

We asked the AIECE institutes in March to give their assessment on the probability of Greece leaving the Eurozone. A kernel density calculated from the answers illustrates that the institutes, on average, consider the probability of an exit to be rather low (see Figure 1), mostly due to the high costs involved for both Greece and the Eurozone. That said, the heterogeneity of estimates is high, ranging from 0% to 80%. An institute commented that an improvement in the economic conditions of Portugal, Spain, and Italy would increase the probability of a Greek exit. The reason for this is that such a scenario would moderate Eurozone contagion risks reducing the incentive for other countries to support Greece. 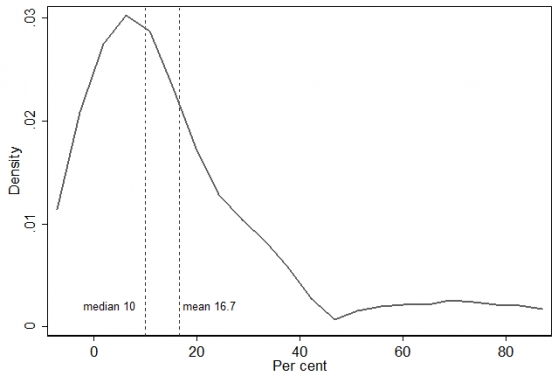 Further, the AIECE institutes were asked to give probability estimates of a haircut for the sovereign debt of Portugal. The kernel density in Figure 2 reveals that the institutes, on average, see a considerable risk of a haircut. Again, the dispersion of the estimates is high, with probabilities ranging from 0% to 90%. 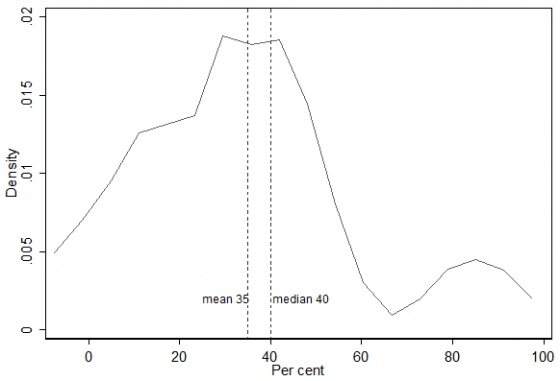 Facing these risks, we asked the AIECE institutes to provide their view on the preferred scenario to the solution of the European sovereign debt crisis. The majority of the AIECE institutes prefer a stronger involvement of the EU and the Eurozone institutions (Figure 3), including nine institutes in favour of a fiscal union. The fiscal compact, meanwhile, is preferred by only five institutes. In line with the current political discussion in Greece, France, and the UK, four institutes emphasise the need for more flexible austerity programmes. In addition, the institutes were asked to assess the ECB’s commitment to engage in solving the on-going crisis. Two institutes consider the current ECB involvement too strong, while 11 think it is just right and 10 regard it as insufficient. 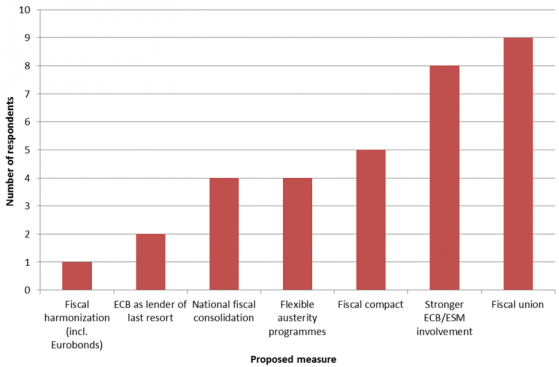 In addition, we asked the AIECE institutes to estimate the size of fiscal consolidation measures, which the European governments implemented or will implement in 2012 and 2013. This is a delicate question, as such measures are often difficult to quantify and the institutes had to judge to what extent the planned measures will eventually be implemented. The answers show big differences within Europe. Italy seems most ambitious in consolidating its budget, although other countries are under even higher pressure from the bond markets. Finland, Germany, and Norway on the other hand have only small or even no consolidation packages. Interestingly, the Greek consolidation programme is far from being as ambitious as the Italian or Irish one; it corresponds to just about the average of the Eurozone. The institutes in the Eurozone estimate that fiscal consolidation amounts on average to 4.4% of GDP cumulated over 2012 and 2013, with a slight bias towards higher consolidation in 2013. Outside the Eurozone, the consolidation measures are with 2.7% of GDP distinctly smaller.

Finally, we asked the AIECE institutes to forecast the growth profile for the EU and the Eurozone. As can be seen from Figure 4, the AIECE Institutes, on average, project that the EU turns from negative to positive growth in the second quarter of 2012, while the Eurozone follows one quarter later. The institutes, on average, expect the EU to grow more strongly than the Eurozone in every single quarter of 2012 and 2013. This expected growth differential may be explained by the relatively stringent consolidation measures in the Eurozone countries, while the measures in the rest of the EU are on average smaller.

Figure 4. Forecast of quarter-over-quarter GDP growth in the EU and the Eurozone

Source: AIECE institutes. Figure 5 shows the average over the AIECE institutes’ forecast for the EU or the Eurozone, respecitively. The number of answers differs between the two forecasts.

In a policy climate marked with as much uncertainty as Europe is now experiencing, expert surveys are one way of gauging what economists think should and will happen going forward.

1The deadline for the forecasts and statements by the AIECE Institutes was 1 April 2012. The full results are presented in the Spring 2012 AIECE General Report, which can be downloaded from the AIECE (here) or the KOF Swiss Economic Institute (here).