As reported on MB last week Moody’s slapped Italy with another downgrade noting the following factors:

1. Italy is more likely to experience a further sharp increase in its funding costs or the loss of market access than at the time of our rating action five months ago due to increasingly fragile market confidence, contagion risk emanating from Greece and Spain and signs of an eroding non-domestic investor base. The risk of a Greek exit from the euro has risen, the Spanish banking system will experience greater credit losses than anticipated, and Spain’s own funding challenges are greater than previously recognized.

2. Italy’s near-term economic outlook has deteriorated, as manifest in both weaker growth and higher unemployment, which creates risk of failure to meet fiscal consolidation targets. Failure to meet fiscal targets in turn could weaken market confidence further, raising the risk of a sudden stop in market funding.

At the same time, Moody’s notes that the sovereign’s current Baa2 rating is supported by significant credit strengths relative to other euro area peripheral economies, including (1) maintenance of a primary surplus, (2) large and diverse economy that can act as an important shock absorber in the current crisis, and (3) substantial progress on the structural reforms which, if sustained in the coming years, could improve the country’s competitiveness and growth potential over the medium-term.

You may remember that back in January S&P downgraded much of Europe based on five major points.

In our view, these stresses include: (1) tightening credit conditions, (2) an increase in risk premiums for a widening group of eurozone issuers, (3) a simultaneous attempt to delever by governments and households, (4) weakening economic growth prospects, and (5) an open and prolonged dispute among European policymakers over the proper approach to address challenges.

At the time I noted that although the CRAs were derelict in their duties in the lead-up to the GFC their recent assessments of Europe have been valid and worth taking note of. It is certainly difficult to argue with these points given the 6 months since the assessment and much of that now applies to Italy.

On the first point I noticed that the ECB’s July monthly bulletin showed that YoY credit to the private sector finally went negative in May following on its long term downwards trend:

Italy’s economic performance is mentioned in the second factor mentioned by Moody’s and is something Ihave discussed previously:

The real problem in Italy is that its economy has been stagnate for nearly the entire decade. According to the IMF between in 2000-2010 among all countries of the world Italy only grew faster than Haiti and Zimbabwe. In 2010, Italian GDP was only 2.5% higher than in 2000. This problem is actually made worse by the fact that this is such a long term trend. Italy’s per-capita GDP growth was 5.4% in the 1950s, 5.1% in the 1960s, 3.1% in the 1970s, 2.2% in the 1980s and 1.4% in the 1990s. Since the new millennium the country has hardly moved forward and if we extrapolate out that trend Italy will spend the next decade in contraction.

On top of stalling growth, Italy has a demographics issue. With a debt to GDP ratio at 120% along with a population with a median age of approximately 45 Italy really does look like the Japan of Europe. The only problem is Japan is competitive, runs a trade surplus and is sovereign in its own currency. Italy has none of these things.

Italy’s latest round of business data suggests that the short-t0-medium term outlook of the economy isn’t about to deliver a turn around:

The latest Business Outlook survey conducted by Markit shows that confidence among Italian businesses has dropped since the start of the year, and is only slightly higher than at the height of the global financial crisis. Respondents highlighted concerns over the impact of greater fiscal pressures and a lack of credit availability on prospects for growth in output and investment in the year ahead, and have signalled their intentions to reduce staffing levels further.

And the country’s PMI tells the same story: 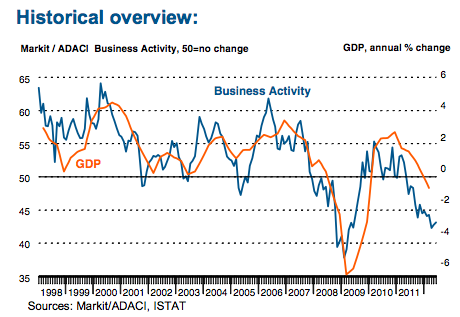 Overnight the Italian government added to its own woes with verification of previous economic estimates from the Bank of Italy:

Italy’s government will revise down its forecast for the economy this year to a contraction of less than 2 percent when it updates its economic targets in September, new economy minister Vittorio Grilli said in a newspaper interview published on Sunday.

The government had previously forecast the economy would shrink 1.2 percent this year. Its new forecast is close to the Bank of Italy’s estimate of a 2.0 percent contraction but more optimistic than the employers’ lobby Confindustria’s prediction of a contraction of more than 2.4 percent.

However, although the economic story is a sorry tale, it may not be Italy’s largest short-term risk. As noted by Moody’s, Italy has the ability to use its large private sector wealth as a buffer and with a focussed and well managed transition towards greater production the country could potentially works its way out of its troubles while staying within the monetary union.

That being the case, one of the most important assets Italy will require is a strong and stable leadership. Thisappears to be a bit of a problem:

Prime Minister Mario Monti said Italy faced a “war” at home and abroad as his government pushes to revamp the euro-zone’s third-biggest economy and extricate it from the region’s debt crisis.

The premiere’s remarks at a banking conference in Rome came as allies of the premier’s predecessor, Silvio Berlusconi, began clamoring for the controversial billionaire to run for office in the next election. That prospect is likely to unnerve investors and EU authorities who pushed for Mr. Berlusconi’s ouster in November.

And adding to the political risk is the future of Mario Monti:

Italy’s unelected Prime Minister Mario Monti said he won’t serve in another government when his term ends next year.

“I have always excluded and I still exclude considering an experience of government that goes beyond the next election, which is naturally the end of the government that I have the honor of presiding over,” he told reporters in Brussels today after a meeting of finance ministers.

Monti made the comments after speculation in the Italian press about the possibility that the premier would be asked to remain in office after elections due in April of next year. The nation’s two main political parties, which suspended their rivalries and have jointly supported Monti’s policies, may not be able to win a governing majority in parliament on their own, polls indicate.

Given these reports it would appear that Italy is moving towards a period of political instability. This is certainly not an environment in which you would expect to see substantial progress on the structural reforms or maintenance of fiscal austerity. We are yet to see exactly what the Italian political landscape becomes if Mr Monti does take to the exits, but it is quite possible that Italy’s politics once again become far more of a concern to the financial world than the nation’s economy.