Just when you think that things can get no worse in Spain, they do. Take a look at this chart, courtesy of Credit Suisse via FT’s Alphaville 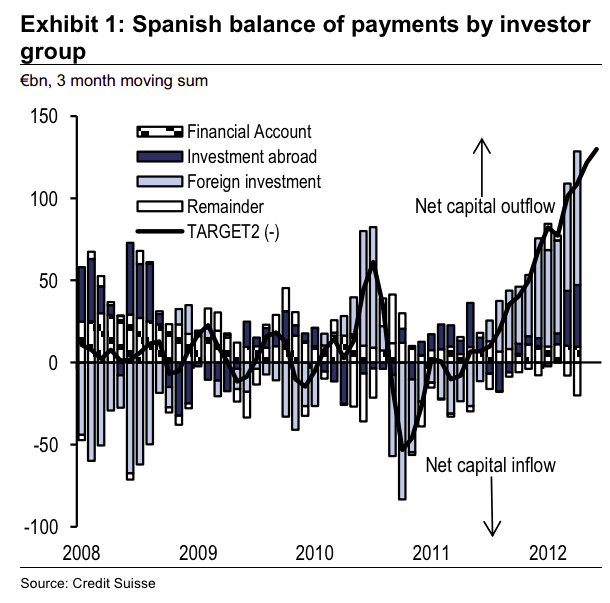 Yiagos Alexopoulos at Credit Suisse estimates that Spanish capital outflows are currently running at an annualised rate of 50 per cent of GDP. No question, the bank run is clearly accelerating, and one can easily understand why. The country is turning into a Little House of Economic Horrors. The alleged “rescue” of Madrid’s banks is a non-starter. 100 billion euros won’t begin to cover the scale of the problem on any honest accounting or “stress test” (and that’s before we get to the next phase of announced austerity measures).

Chuck Davidson of Wexford Capital has completed a report where he looked at the Spanish banks, extrapolating to all of them from a close look at the big five.. He haircutted their assets by 25%, which hardly seems excessive. Moving from the big 5 to the entire banking system, he came up with 990 billion euros as the capital needed to get Spain’s banks to Basel 3 risk weighted capital standards. Madrid, we have a problem!

That’s of course after these very same banks have ripped off thousands of depositors, who were strongly encouraged to buy preferred equity shares and subordinated debt, which were touted to them as higher yielding, low risk fixed income replacements instead of lower yielding deposits

As Ed Harrison of CreditWritedowns.com has noted in a recent post:

When the banks tried to get private funding, universally they were unable to get institutional and or foreign investors onboard. Bankia, for example, wrestled with whether to pull its IPO altogether after receiving a tepid response from institutional investors. Instead, Bankia went ahead with the IPO, getting the money from Spain’s retail investor base. Other banks raised money by unethically and potentially illegally pressuring bank depositors into preferred equity and subordinated debt instruments they did not fully understand. Reuters says, for example, that 62% of sub debt holders in Spain are also depositors at the same institutions.

To help fund these bailouts, Spanish PM Mariano Rajoy is continuing to propel the country toward national economic suicide via more ruinous fiscal austerity measures. He has just increased the sales tax from 18% to 21%. This in a country with 25% unemployment, 50% youth unemployment and collapsing retail sales.

That will raise a ton of revenue, NOT!

Who needs to get the Troika to force fiscal austerity on you, when you’ve got Spanish quislings perfectly happy to do the job themselves?

As market participants are coming to recognize the extent and gravity of the bank run (of which Spain is surely the weakest and most dangerous link) and its dire implications for the ECB, Europe’s capital outflow is likely to intensify further, especially given the paltry response from last week’s umpteenth summit to “save the euro” and the mounting legal challenges in Germany to any form of euro-wide deposit insurance. In regard to the latter, it is entirely plausible that Germany’s Constitutional Court rules that the ESM itself (now under legal challenge) is ruled unconstitutional by German law which would put paid to any Eurozone wide solution to the bank run.

If so, the euro should fall precipitously despite today’s unprecedented spec short position. The recent adverse price action in the euro suggests the capital outflow from Europe may be intensifying because market participants are coming to realise that the odds of a euro exit by one or more countries are increasing and political obstacles will probably prevent an effective policy response like deposit insurance to arrest Europe’s bank run and capital outflow.

Given the prospect for policy paralysis ahead, we should expect a continued capital outflow of the kind now manifesting itself in Spain. That outflow should strain the recent efforts of the ECB to retard depreciation of the euro and alert even more participants to the euro’s truly rickety foundations.