In a previous post, we looked briefly at NZ companies that have now, or have ever had, “Bancorp” in their name, uncovering a rich vein of seediness. Filter out the more-or-less legit-looking companies and the more-or-less dodgy ones that I wrote about then, and there’s more. There always seems to be more.

One way in is via the shelf company 2321568 Limited, formerly known as First European Bancorp Limited. It is wholly owned by NZ Invest & Holding Group Limited, which has as director Michael Franz, of Suite 606, Regent House, 24/25 Nutford Place London. That’s pretty improbable. That’s a serviced office address, not a residential one. The NZ Companies Office Application for Registration specifically requires the residential address of company directors. On the face of it, that address cannot be right, and one notes Para 1, Section 377 of the Companies Act:

commits an offence, and is liable on conviction to the penalties set out in section 373(4).

Well I imagine directors do tend to know where they live; so I suspect giving a serviced office address as your home address probably is knowingly misleading. Did NZ Companies House query that address? Do they not feel responsible enough for the integrity and truthfulness of the information on their register to feel like doing any basic checks? One suspects not, and the doubts accumulate as one looks at the directors of other subsidiaries of NZ Invest & Holding Group.

Corporate Compliance registered all four of the other companies in this group. So either a) the directors of NZ Invest & Holding Group and subsidiaries all happen, by some outrageous fluke, all to be living, in completely different countries, at what are advertised as serviced offices, or b) all the addresses are spurious. If so, Corporate Compliance Limited has fake directors’ details itself, and submitted fake directors’ details for other companies, breaking the New Zealand Companies Act each time. The registration went through; New Zealand Companies Office was unperturbed, or not paying attention.

Corporate Compliance’s Ms Michaela Leo is or was a director of four UK companies too (slow web site), at that same serviced office address, so the UK’s Companies House, which also has a requirement that directors’ residential addresses be supplied, may be no better at verifying compliance with the local laws than NZ’s Companies Office; that wouldn’t be a massive surprise.

Mind you, given the quality of data checking one is seeing, one might wonder if Ms Leo is even aware of her role at Corporate Compliance Limited of New Zealand, never mind proud of it. Perhaps she will pipe up indignantly in the comments and tell us all about her know-your-client policy; or deny all knowledge of her New Zealand directorship.

Anyhow: there you have a perfectly opaque offshore company structure: the serviced offices in various countries forward physical mail to someone somewhere, and no-one on the outside has a hope of telling what’s going on. Tax dodging, money laundering, investor fraud? Who knows. We can tell it’s a big secret, though.

The applications to incorporate Corporate Compliance Limited and NZ Invest & Holding Group were purportedly submitted by Eurocommerce Inc, likewise of 24B Moorefield Rd Johnsonville, and represented by some unidentifiable squiggle of a signature. But there isn’t a New Zealand company called Eurocommerce Inc, registered at that address, or any other.

Such is the surreal world of company registration, and not necessarily just in New Zealand. As we see, the Brits are be no better.

OpenCorporates tells us that in their very extensive (but still incomplete) database, they only know of one company called Eurocommerce Inc, which is incorporated in Panama, company number 645692. Is that the one?

Finally the shareholder list of Pink Portfolio Group Limited, another company directed by Michael Franz of the dubious UK address, tells us that Eurocommerce, Inc is indeed located in Panama. The link is confirmed, and off we go to the Panamanian registry. Here’s the screen dump: 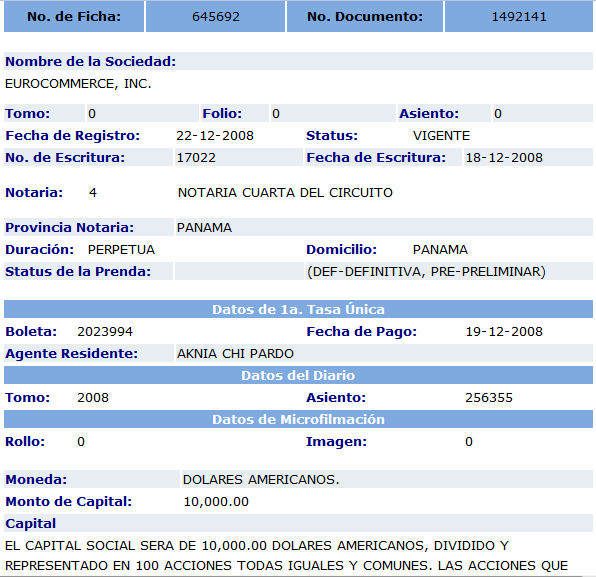 Eurocommerce’s director, Aknia Chi, turns out to be a Panamanian lawyer with an offshore company registration business,  (FFS! 12 Feb 2015) Sovereign Management and Legal SA of Panama, which has been dissolved (“disuelta”): 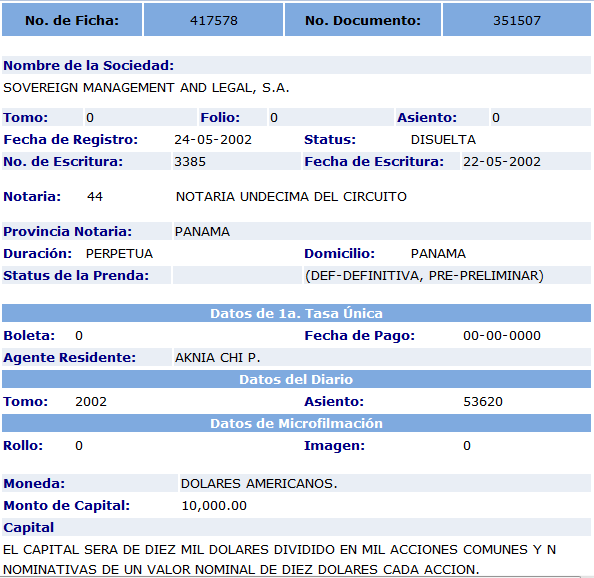 Yet, quite unperturbed by the dissolution of the underlying business entity, Sovereign Management and Legal’s web site is apparently still in full swing. On “New Zealand Offshore Finance Companies” the site says: 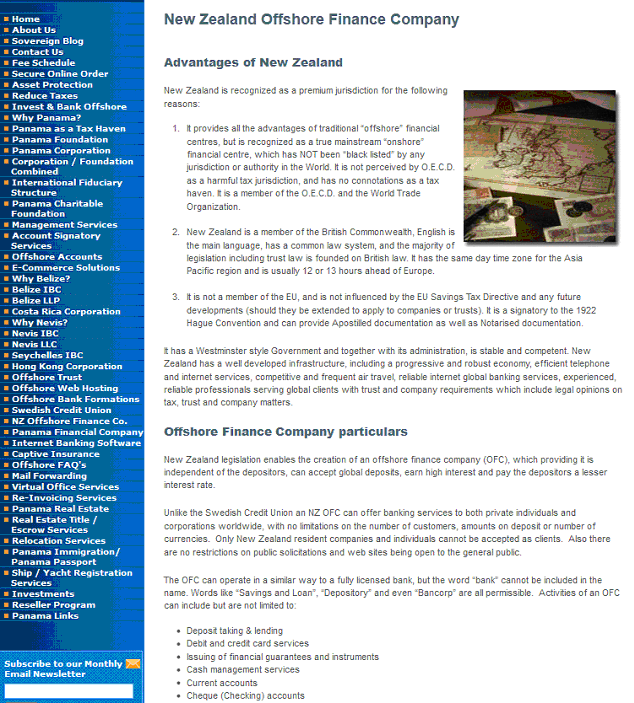 Etcetera…some of this looks like a crook’s dream, doesn’t it? The panel on the left gives an idea of the possible scope of Sovereign Management and Legal’s offshore activities. As we saw in a previous post at NC, the New Zealand Reserve Bank begs to differ about the claims about New Zealand offshore finance companies:

The Reserve Bank advises that caution should be exercised by anyone considering doing any form of business with entities that promote themselves as “New Zealand offshore finance companies”, or use similar descriptions, and that offer financial services either on-line or from locations outside of New Zealand.

And the New Zealand Reserve Bank caught up with the “Bancorp” name wheeze too, eventually; hence the name changes we observed. I wonder when they will catch up with New Zealand “Savings & Loans” companies, where it happens that Aknia Chi also has a walk on part, as a former director of the company once known as Investment Suisse Depository Savings Loan & Trust Limited.

Also still to catch up, New Zealand Companies Office, which simply seem to be ignoring all sorts of company registration abuses perpetrated by overseas registrants, while dutifully putting the locals through much stricter filtering – such as requiring proof of ID and performing address validation. The locals should be annoyed with the Companies Office, in my humble opinion. They are screwing up.

So anyway, yet another dubious company creator turns out to be active in New Zealand: Aknia Chi, aka Aknia Chi Pardo, aka Aknia Mayn Chi Pardo.

At least one can give Aknia Chi a single face to go with the multiplicity of names she uses. It’s not quite like watching Lara Croft get ready for a bath at the end of the Tomb Raider video game, I’m afraid, but it’s the best that I can do.  Here she is (well, I think it is she), looking perky:

Director and General Counsel of what, you ask? That is a story for another time, and possibly another narrator.

UPDATES 12-Feb-2015: Since this has finally gone mainstream, some decidedly belated proofreading corrections.