Commentators and analysts have been starting to estimate what the costs to banks for their Libor manipulation might be. We’ve pointed to an estimate by the Economist that says the damages for municipal/transit authority swaps due to Libor suppression (during the crisis and afterwards) could be as high as $40 billion. Cut that down by 75% and you still have a pretty hefty number. Other observers (CFO Magazine) have argued that the losers were mainly other banks, and since banks are pretty much certain not to sue each other, the implication is the consternation is overdone. But these markets were so huge ($564 trillion was the 2011 trading volume in one contract, the CME Eurodollar contract, which uses dollar Libor as its reference rate) that even a little leakage to end customers still adds up to a lot of exposure.

FT Alphaville has posted a new effort to pencil out the cost to the banks, prepared by Morgan Stanley. It focuses only on Libor suppression, that is, the lowballing of Libor during the crisis and afterwards. As the analysis points out, while the Barclays settlement discussed manipulation only from 2005 to 2009, a suit by Charles Schwab alleges the suppression continued through 2011. The assumption is that that is where the bigger damages lie; the banks were apparently all leaning in the same direction while in the earlier periods, the belief, based on the Barclays-related revelations, is that the banks would sometimes try to push rates up as well as down, and the impact at any one time may also have been less in total (we need to stress that that is an assumption, and given that industry participants also say the Libor manipulation goes back much further than 2005, it is probably more accurate to say that the forensics on the earlier period are more difficult, and we just don’t know yet how big the impact was over that time frame).

The Morgan Stanley estimate, which dors an admirable job of trying to dimension what the damage might be (this is admittedly a pretty fraught exercise) looks at different categories of exposure. First is regulatory fines, which it ballparks at $850 million for Bank of America, Citi and JP Morgan, and a mere $550 millionish for Lloyds. Next is litigation risk, which it sees averaging $440 million per bank, with the hit for each ranging from $60 million to $1.1 billion. It finally flags, but does not cost out, the fact that banks will be forced to change how they do business going forward. If the Libor revelations lead to more transparency, not just in Libor but other areas, that could have a significant impact. Banks enjoy a tremendous advantage over customers in markets where pricing is opaque.

But what about the bonuses that all the staff got as a result of this nefarious activity? The inability to recoup those payouts is a big reason to be skeptical that anything will change, ex much more aggressive supervision and disclosure, or maybe (gasp) prosecutions. And so far, despite the enormous costs of the crisis, the banks have done a good job in limiting reforms (I don’t take their caviling that their lower profits are due to regulation seriously. Damage your customers on a massive basis by blowing up the global economy, and lose your cheap float profits due to central bank ZIRP policies to prop up your balance sheets, and what do you expect?).

Morgan Stanley provides an estimate of the impact of Libor suppression, 35 basis points for each year, 2007 to 2011 (see exhibit 10, third column from the right). That level is consistent with NC reader complaints during the criss (go NC readers!). I’m surprised that it would have continued at that level post, say, early 2009, but we’ll assume four years. 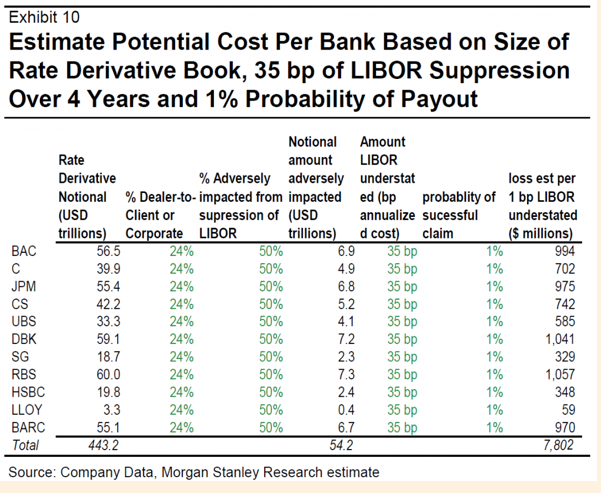 They start with the $350 trillion notional amount outstanding linked to Libor (this from the British Bankers Association, per the text of the full report, which FT Alphaville posted at its Long Room; notice we’re not including ideas like the possible front running of futures contract). Note not all Libor tenors were affected equally; the biggest suppression was in the shortest maturities. Per the BIS, about 25% was with outside parties. So we’ll ignore distribution (as in some banks potentially profiting at the expense of other banks). We’ll also assume (following MS) that 2/3 of the time, the banks won against customers, 1/3 they lost (remember, we are looking at the profit impact to the banks). So we have net 1/3 of the time, banks winning v. customers from Libor manipulation.

Now 35 bps is the total manipulation assumed, but how much turned into actual revenue? This is a critical assumption. Let’s assume a mere one basis point.

That gives you $2.9 billion across all 16 banks, or $180 million per bank. Times four years, you have $720 million. Compensation as a percent of investment bank revenues is typically 40% to 50%. So we have, on pretty conservative assumptions, roughly $290 to $360 million in extra comp on average per bank for Libor manipulation. This would presumably have gone to comparatively few people (recall Bob Diamond trying to say only 14 traders were involved, although the FSA said “at least 14”). Assume 20 per desk. plus everyone in the reporting line above would have benefitted, as well as the C level execs. So how many people is that? Maybe 50 tops? OK, let’s be really charitable and assume only 50% directly benefitted those people, the rest helped improve bank-wide comp (all those back office types, etc). Even assuming that, you have an average of $2.9 to $3.6 million in extra bonuses per person over the four year period.

The point here is pretty simple. Even if you go to some lengths to cut the numbers way down, you come to the conclusion that if this manipulation had any meaningful impact on the profits of the swaps and derivatives desks, a comparatively small number of people who’d be very cognizant of the manipulation by virtue of seeing the contrast between posted Libor versus actual market prices, likely profited very handsomely. And the people up the line would have benefitted as well.

I hope informed readers will make suggestions as to how to come up with better approximations as to how much of the Libor manipulation led to higher bonus payments which will never be recouped.