One of the financial system’s chief roles is to provide credit for worthy investments. Some very deep changes are happening to this system – changes that surprisingly few people are aware of. This column presents a quick sketch of the modern credit creation and then discusses the deep changes are that are affecting it – what we call the ‘other deleveraging’.

In the simple textbook view, savers deposit their money with banks and banks make loans to investors (Mankiw 2010). The textbook view, however, is no longer a sufficient description of the credit creation process. A great deal of credit is created through so-called ‘collateral chains’.

A Hong Kong hedge fund may get financing from UBS secured by collateral pledged to the UBS bank’s UK affiliate – say, Indonesian bonds. Naturally, there will be a haircut on the pledged collateral (i.e. each borrower, the hedge fund in this example, will have to pledge more than $1 of collateral for each $1 of credit).

These bonds are ‘pledged collateral’ as far as UBS is concerned and under modern legal practices, they can be ‘re-used’. This is the part that may strike non-specialists as novel; collateral that backs one loan can in turn be used as collateral against further loans, so the same underlying asset ends up as securing loans worth multiples of its value. Of course the re-pledging cannot go on forever as haircuts progressively reduce the credit-raising potential of the underlying asset, but ultimately, several lenders are counting on the underlying assets as backup in case things go wrong.

To take an example of re-pledging, there may be demand for the Indonesia bonds from a pension fund in Chile. As since these credit-for-collateral deals are intermediated by the large global banks, the demand and supply can meet only if UBS trusts the Chilean pension fund’s global bank, say Santander as a reliable counterparty till the tenor of the onward pledge.

Plainly this re-use of pledged collateral creates credit in a way that is analogous to the traditional money-creation process, i.e. the lending-deposit-relending process based on central bank reserves. Specifically in this analogy, the Indonesian bonds are like high-powered money, the haircut is like the reserve ratio, and the number of re-pledgings (the ‘length’ of the collateral chain) is like the money multiplier.

To get an idea on magnitudes, at the end of 2007 the world’s large banks received about $10 trillion in pledged collateral; since this is pledged for credit, the volume of pledged assets is a good measure of the private credit creation. For the same period, the primary source collateral (from hedge funds and custodians on behalf of their clients) that was intermediated by the same banks was about $3.4 trillion. So the ratio (or re-use rate of collateral) was around 3 times as of end-2007. For comparison to the $10 trillion figure, the US M2 was about $7 trillion in 2007, so this credit-creation-via-collateral-chains is a major source of credit in today’s financial system. Figure 1 shows the amounts for big banks in the US and Europe.

Figure 1. Pledged collateral that can be re-used with large European and US banks

As this process is unfamiliar to many non-specialists, consider another example. Figure 2 illustrates how a piece of collateral (e.g., US Treasury bond) may be used by a hedge fund to get financing from a prime-broker (say, Goldman Sachs). The same collateral may be used by Goldman to pay Credit Suisse on an OTC derivative position where Goldman was ‘out-of-the-money’ to Credit Suisse. And then Credit Suisse may finally pass the US Treasury bond to a money market fund that will hold it for a short tenor (or till maturity). Notice that the same Treasury bond has been used twice three times as collateral for extensions of credit – from the original hedge-fund owner to the money market fund.

Figure 2. An example of a collateral chain

Comparing private and traditional money creation, a critical difference is that private credit creation turns on banks’ trust of each other. New credit gets created only if the onward pledging occurs and this depends, for example, on UBS’s trust in Santander as a counterparty in the first example. Due to heightened counterparty risk, onward pledging may not occur and the collateral thus remains idle in the sense that it creates no extra credit.

To put it differently, a key difference between the trade and pledge-collateral credit creation processes is the role of governments. The traditional textbook money multiplier is based on insured deposits and thus largely a creature of government regulation and the central bank’s lender of last resort assurance. The collateral multiplier is very much a creature of the market.1 The multiplier – which essentially measures how efficient illiquid assets can be converted into liquid collateral and thus credit – varies with the extent to which markets views a given asset classes as ‘liquid’ in normal and stressed markets.

This brings us to the key policy point. The ‘other’ deleveraging. In this new private-money-creation process, there are three distinct ways of reducing credit.

Most recent research has focused on the first. Balance sheet shrinkage due to ‘price declines’ (i.e., increased haircuts) has been studied extensively – including the recent April 2012 Global Financial Stability Report of the IMF and the European Banking Association recapitalisation study (2011).

In this column we raise the flag on the second and (more importantly) the third way. When market tensions rise – especially when the health of banks comes under a shadow – holders of pledged collateral may not want to onward pledge to other banks.

This ratio decreased from about 3 to about 2.4 as of end 2010 – largely due to heightened counterparty risk within the financial system in the present environment. These figures are not rebounding as per end 2011 financial statements of banks – see Table 1 and Figure 1. Indeed, anecdotal evidence suggests even more collateral constraints recently.

Consequences of the other deleveraging: The cost of credit

Reduced market interconnectedness, or the trend toward ‘fortress’ balance sheets, may be viewed positively from a financial stability perspective if one simply views each institution in isolation. However, the vulnerabilities that have resulted from the weakened fabric of the market may yet to have become fully evident. Since the end of 2007, the loss in collateral flow is estimated at $4-$5 trillion, stemming from both shorter collateral chains and increased ‘idle’ collateral due to institutional ring-fencing; the knock-on impact is higher credit costs for the economy.

Relative to mid-2007, the primary indices that measure aggregate borrowing cost (e.g., BBB index) are well over 2.5 times in the US and 4 times in the Eurozone. This is after adjusting for the central bank rate cuts, which have lowered the total cost of borrowing for similar corporates (e.g., in the US, from about 6% in 2006 to about 4% at present). Figure 3 shows that for the past three decades, the cost of borrowing for financials has been below that for non-financials; however this has changed post-Lehman. Since much of the real economy resorts to banks to borrow (aside from the large industrials), the higher borrowing cost for banks is then passed on the real economy.

Figure 3. Post-Lehman, borrowing cost for financials are higher than non-financials 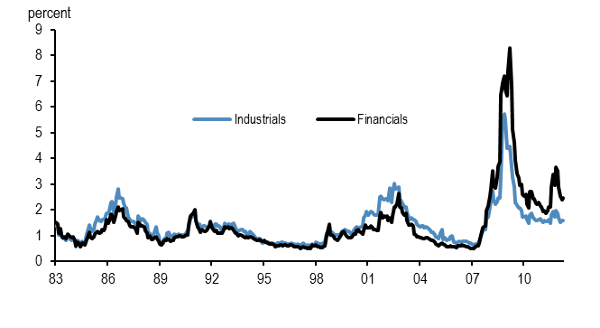 Since cross-border funding is important for large banks, the state of the global pledged collateral market may need to be considered when setting monetary policy.

Overall financial lubrication in the US, UK, and the Eurozone, exceeded $30 trillion before Lehman’s bankruptcy (of which 1/3rd came via pledged collateral). Certain central bank actions, such as the ECB’s LTRO, the US Federal Reserve’s qualitative easing and the Bank of England’s asset purchase facility have been effective in alleviating collateral constraints. However, these ‘conventional’ actions, to the extent they merely exchange bank reserves for collateral of prime standing (such as US Treasuries), do not address the issue credit creation via collateral re-pledging (Singh and Stella 2012).

The ‘kinks’ in the red line (Figure 4) M2 expansion due to QE but much of the ‘easing’ for good collateral is deposited with the central banks and is not available to fund lending. As of end-2011, the overall financial lubrication is back over $30 trillion but the ‘mix’ is in favour of money which not only has lower re-use than pledged collateral but much of it ‘sits’ in central banks.

As the ‘other’ deleveraging continues, the financial system remains short of high-grade collateral that can be re-pledged. Recent official sector efforts such as ECB’s ‘flexibility’ (and the ELA programs of national central banks in the Eurozone) in accepting ‘bad’ collateral attempts to keep the good/bad collateral ratio in the market higher than otherwise. But, if such moves become part of the central banker’s standard toolkit, the fiscal aspects and risks associated with such policies cannot be ignored. By so doing, the central banks have interposed themselves as risk-taking intermediaries with the potential to bring significant unintended consequences.

Authors’ note: Views expressed are of the authors only and not of the International Monetary Fund.

1 This is why we ignore implicit/explicit government back-stops collateral markets such as Triparty repo in the US that does not reflect market clearing prices (Copeland et al. 2009) and/or where onward pledging of the collateral may be limited (e.g., to the primary dealer club only).