Today, Joseph Smith, the official monitor for the Federal-state mortgage settlement entered into earlier this year with five major servicers, released a glossy initial report on program progress. Needless to say, my cynicism was piqued both by the glossy format of the document and the decision to release it well before the required date of second quarter 2013.

But the distressing part is the way the settlement is playing out according to script. We argued that rather than either remedy the abuses that occurred during the crisis or provide meaningful restitution to wronged borrowers and investors, the settlement was really yet another bailout. This one took place by giving the banks a release of very considerable liability for very little in the way of actual hard dollar costs. Most of it was in the form of credits for actions taken, and most of the actual costs would be borne not by the banks (in their capacities as originators and/or servicers in mortgage securitizations) but investors.

Not surprisingly, the media is dutifully taking up Administration talking points and either burying or missing completely the significance of key bits of information in the report. For instance, the New York Times claims, “Mortgagees See Benefits in Bank Plan,” with this as its opening paragraph:

More than 130,000 homeowners have received $10.5 billion in relief under the national settlement over foreclosure abuses, according to a preliminary report issued Wednesday by the settlement monitor.

Between March 1 and June 30, a total of $1.7 billion in loan help was distributed in Florida through mortgage principal reductions, refinances, short sale approvals and other activities such as moving assistance for people who can’t stay in their homes.

And from the Cleveland Plain Dealer:

Five of the nation’s largest mortgage lenders have agreed to nearly $11 billion in short sales, loan modifications and refinances since February. A total of 137,846 borrowers benefited. The deals — part of a $25 billion settlement reached in February with JPMorgan Chase, Bank of America, Citigroup, Ally/GMAC and Wells Fargo — were detailed in a report issued Wednesday by the independent Office of Mortgage Settlement Oversight.

Erm, no. While these actions do indeed count towards the total settlement that each bank is required to satisfy, the claim that borrowers benefitted as a result of the settlement is not warranted. The measure is not the absolute level of activity in period covered by the report (March 1 to June 30) but how they did over and above what they would have done anyhow. Not surprisingly, this progress report does not seek to answer that question.

In fact, some of the things in the report are troubling. For instance, despite the claim, taken up by the media, that borrowers got “relief”, what we see instead is that they got overwhelmingly was short sales: 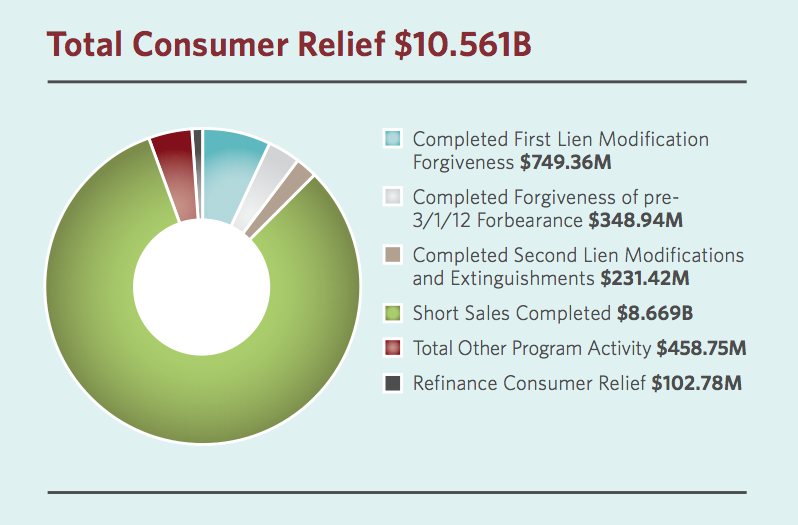 This outcome should not be seen as any sort of accomplishment. While a short sale is admittedly preferable to a foreclosure, but what most people think “relief” means is some sort of financial beak that allows them to remain in, and hopefully keep, their home. And there is no reason to think that this level of short sales had much to do with the mortgage settlement. As Christian Science Monitor noted in May:

And that’s because, as DS News pointed out in July 2011, big banks had finally gotten serious about completing short sales:

The nation’s leading mortgage lenders are extending extras for short sale transactions employed as an alternative to foreclosure – both in the form of monetary incentives for borrowers and streamlined procedures for real estate agents.

Wells Fargo says it has been making “enhanced financial relocation assistance offers” that can be as much as $10,000 or $20,000 to certain borrowers who choose to go through with a short sale or transfer the title back to Wells via a deed-in-lieu.

This extra incentive is being offered to distressed borrowers in Florida and other states where the foreclosure process is lengthening, a spokesperson for Wells Fargo explained. The exact amount of the relocation funds provided to individual borrowers varies based on a number of factors, the company says.

Wells Fargo noted that this type of additional relocation assistance is only available on first-lien loans that the company itself owns – which represent only about 20 percent of the loans Wells Fargo services. The company must follow investor guidelines for the remaining loans it services.

JPMorgan Chase is also offering a range of incentives to borrowers that agree to a pre-foreclosure sale “because if we can’t work out a modification, a short sale is a better result for the borrower, the servicer, the investor, and the neighborhood than a foreclosure,” the company said in a statement.

Chase says the amount of the offer “depends on a number of factors” but declined to share specific details on how much money it’s been providing to short sellers.

One agent in Florida confirms that he has indeed received a letter from Chase offering $20,000 to a borrower he’s representing in a short sale transaction.

Another agent in California says he closed a short sale with Chase where the borrower was paid $30,000 at closing for cooperating with the short sale.

“I have closed over 200 short sales and this was the most I have seen paid to a borrower,” the agent said.
Citi has confirmed that its average incentive offer is currently $12,000 for borrowers in cases where Citi owns the loan.

The credit the banks are getting for what they had already been doing is the difference between the mortgage balance and the amount that was realized via the sale of the house. As Dave Dayen points out, that it economically equivalent to a waiver of a deficiency judgment. Yet over $5 billion of the $8.67 billion in short sales “relief” was in non-recourse states, meaning the banks could not have collected a deficiency judgment anyhow (note it is a bit more complicated than that; the prohibition against deficiency judgments is limited to purchase money mortgages. But in California, and perhaps other non-recourse states, to pursue a deficiency judgment, the lender would have had to undertake a judicial rather than a non-judicial foreclosure. Since it appears that servicers pretty much universally used non-judicial foreclosures in states that allowed it, and California is $3.9 billion of his over $5 billion total, his simplification is still valid). Dayen concludes:

This is a handout to the banks. Some part of this $5 billion will satisfy their punishment in the settlement (not all of it; there are portions of a dollar in the formula based on where the loan was held in portfolio or was a securitized loan held by an investor). And it represents $5 billion these banks could never collect, $5 billion they’re barred by collecting by law. Banks should never have been allowed to count deficiency judgment waivers or short sale forgiveness in non-recourse states. But they are, and they’re doing it in big numbers.

On top of that, we have the paltry numbers of actual modifications: 7,093 got first lien modifications and 4,213 got second lien mods or extinguishments. Note that there is likely some double counting, since if a servicer modified a first lien and there was a second on the same house, he had to modify it according to a formula that was pretty more or less equivalent to pari passu. Contrast this level with top mortgage analyst Laurie Goodman’s report that 2.8 million borrowers are seriously delinquent.

Notice also the effort in the media to pooh pooh skeptics. Per the Times:

Those whose principal was reduced got an average of $106,000 off their balance, substantially more than some critics of the agreement predicted.

Huh? We’d predicted that the banks would modify the biggest mortgages, which would result in a comparatively small number of well heeled borowers getting relief. In fact, that’s the obvious approach to take given their incentives. They want to achieve the maximum amount of relief for their costs and effort. It takes the same amount of work to modify a large mortgage as a small one. So you’d expect servicers to modify large rather than small mortgages, resulting in large average dollar reductions. Notice that the settlement report fails to give the key statistic: the percentage of principal reduction relative to the mortgage balance. That’s a far more important measure of how much help particular borrowers got. And if the banks are modifying large mortgages, you can bet Smith is not going to let that cat out of the bag. The Administration would not be eager to have the public to know that the average mortgage balance of the loans modified was, say, $475,000.

But local papers seem to be taking up the theme, “the state got more money” rather than questioning the party line. But there are some exceptions, such as in the Charlotte Observer (hat tip Lambert):

Fewer than 2,000 North Carolina homeowners have seen any relief on their mortgages from Bank of America, Wells Fargo and the three other big banks involved in February’s blockbuster mortgage settlement, according to the first progress report issued Wednesday.

Bank of America Corp. is also last among its peers in providing aid that keeps people in their homes, data provided by the mortgage monitor shows. The Charlotte bank had not reduced any principal or refinanced a mortgage anywhere in the country by the end of the period.

Nevertheless, it looks like the Administration has succeed in having the press treat a program that gave the banks a big “get out of jail for almost free” card as a win for consumers. Nicely played.