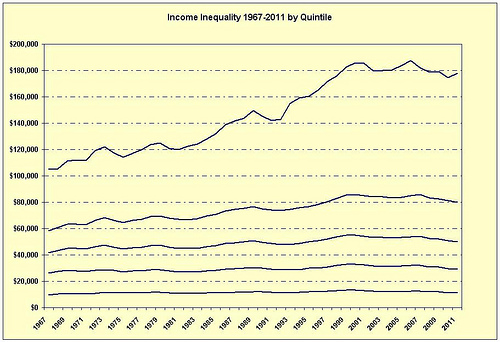 On September 12, 2012, the Census issued its report on Income, Poverty, and Healthcare Coverage in the United States: 2011. While the full report has some nice charts, one that was conspicuously missing was on income inequality. The data for such a chart was in the tables, and so I was able to construct the chart above from them. Mean household (not individual) income for each quintile (20%) is expressed in real (inflation-adjusted) dollars.

One feature that jumps out at you are how relatively flat mean income has been for the bottom 80% over the last 45 years and how much it has grown for the top 20%, from an already high baseline. I thought this merited some further investigation.

Because the first 4 quintiles are so flat, it is worthwhile to look at their averages over the 45 years of data.

Now compare these to the 2011 mean income numbers.

You can see this effect in the chart where dramatic rises in the income of the top 20% are reflected in smaller and smaller rises as we go down from one quintile to the next until we arrive at the bottom 20% where there is almost no change at all.

If you think about it, this chart completely refutes trickledown economics. As I said, the periods of greatest income growth in the top 20% correspond to the Reagan and Clinton Administrations. But what we see is that great increases in income at the top have only modest effects on the incomes of the nearest quintiles and have almost no effect at all on the lowest quintiles. That is very little trickles down, and almost nothing trickles down to the bottom.

The chart shows in easy accessible terms much of what we already knew. Wages have been flat for most of us our whole working lives even as the rich have been making out like bandits. But it also shows that theory so near and dear to neoliberals: trickledown aka supply side economics aka Reaganomics aka “job creators” doesn’t work, has never worked.