Here’s a TED talk by Robert Neuwirth on “The power of the informal economy.” Like most TED talks on political economy, the ideas are intriguing but, if true, are unlikely to impact any of the listeners in the audience. Nevertheless, clocking in at a little under thirteen minutes, it’s definitely worth a listen. As Neuwirth says (my transcription):

[NEUWIRTH]If [System D] were united in a single political system, one country, call it The United Street Sellers Republic, the USSR, or Bazarristan [laughter], it would be worth 10 trillion dollars every year, and that would make it it the second largest economy in the world after the United States.

So what is “System D”? From Neuwirth’s article in Foreign Policy:

System D is a slang phrase pirated from French-speaking Africa and the Caribbean. The French have a word that they often use to describe particularly effective and motivated people. They call them débrouillards. To say a man is a débrouillard is to tell people how resourceful and ingenious he is. The former French colonies have sculpted this word to their own social and economic reality. They say that inventive, self-starting, entrepreneurial merchants who are doing business on their own, without registering or being regulated by the bureaucracy and, for the most part, without paying taxes, are part of “l’economie de la débrouillardise.” Or, sweetened for street use, “Systeme D.” This essentially translates as the ingenuity economy, the economy of improvisation and self-reliance, the do-it-yourself, or DIY, economy [for example]. A number of well-known chefs have also appropriated the term to describe the skill and sheer joy necessary to improvise a gourmet meal using only the mismatched ingredients that happen to be at hand in a kitchen.

I like the phrase. It has a carefree lilt and some friendly resonances. At the same time, it asserts an important truth: What happens in all the unregistered markets and roadside kiosks of the world is not simply haphazard. It is a product of intelligence, resilience, self-organization, and group solidarity, and it follows a number of well-worn though unwritten rules. It is, in that sense, a system.

Now, in some ways this is a very attractive picture to me. It reminds me of how Unix is architected — *nix being the operating system that’s under the hood on my Mac, runs my server, and probably your server too:

There have, historically, been two competing models of operating systems development. There’s the UNIX mentality, of small pieces loosely joined. That is, you have a whole bunch of little, stand-alone applications that all work together to accomplish more complex tasks running atop a svelte kernel that doesn’t know — or need to know — about the pieces its running. Then you have the “everything and the kitchen sink” mentality, used by Microsoft. All versions of Microsoft Windows have huge dependency chains, and what is rightly called “Windows” is a dizzying amalgamation of interdependent pieces of software, none of which can do much on their own. If you’ve ever wondered why your Windows-powered web server included Windows Media Player, or Solitaire, that’s the reason: the “stuff” that makes up Windows is highly interdependent.

Now — and this not the Mac permathread, and not the Windows vs. Unix permathread, so please don’t go there, I’m just making a loose analogy! — the political economy in which I am deeply intertwingled today is a lot like the Windows operating system, in that its components are dizzyingly interdependent. I need a card from my bank to shop on the web; I need an ID from the DMV to vote; if I want to travel on the bus down to Boston without an ID I need to write a letter to the bus company in advance; I need to pay the town for a permit to run my minuscule business; if I put a sign up for my business someone has to measure it; and so forth. There are days, many days, when all of these requirements for compliance seem very much like including Windows Media Player in my server software. 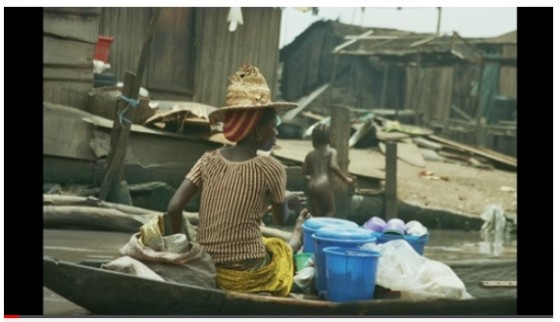 [NEUWIRTH] In System D, this is a store. And what I mean by that is that this is a photograph I took in Makoko, a shanty town in Lagos, Nigeria. It’s built over the lagoon, and there are no streets where there can be stores to shop, and so the store comes to you.

And as it turns out, her boat (one small piece) and her paddle (another small piece) are made in her neighborhood, and her fish (another small piece) comes from the North Sea, and ends up being sold “for a tiny increment of profit on the streets of Lagos.” Neuwirth doesn’t say where the blue buckets in which she keeps her fish come from, but I bet they come from another vendor just like her (and not from the Nigerian equivalent of Wal-Mart.

[NEUWIRTH] Something like this is totally open. It’s right there for you to find. All of this is happening openly and above board, there’s nothing “underground” about it. It’s our prejudgment that it’s underground. … [System D means] the econommy of self-reliance, or the DIY economy. Governments hate the DIY economy….

I observed something very like System D when I visited Bangkok. Bangkok has an awesomely dense economy of street food vendors. Philly’s Center City, for example, may have a cart on every other street corner, and they all sell hot dogs and whatever else they can throw on the grill; they seem to compete mostly on their relish. Bangkok, on the same corner, would have ten carts, all competing on different specialties of delicious food. (Thai culture is serious about food.) Here’s Sukhumvit soi 38 at night; the blur rather gives the flavor of intensely practiced biz: 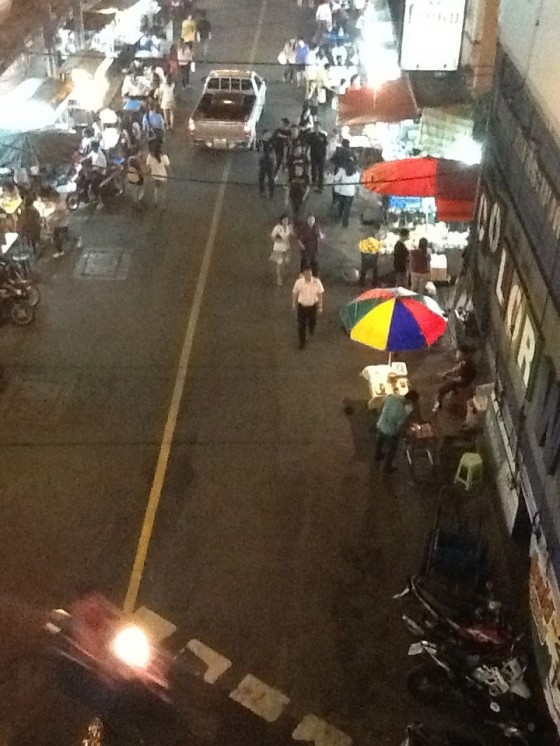 Before night fell and the dinner hour which lasts until four in the morning began, I watched a food cart vendor do set up. She and her helper brought the cart, the menus, and the ingredients: The meats, the vegetables, the sauces. Everything else was “small pieces loosely joined.” A pickup truck came with bags of rice, which the vendors shouldered and took back to their carts. Propane tanks were delivered by motorbike. Sodas were delivered by another motorbike; ice by another. Even small change was a “small piece”; a man came up, my vendor handed him a bill, and he gave her back a neatly tied baggie of coins [arcane boomer reference].

Soi 38 embodies a gorgeous, dynamic commercial architecture, a model of stripped down, just-in-time relationships, and the food was astonishingly good. Granted, I was in trendy hi so Thong Lo; the system was the same elsewhere, but the food wasn’t so good, and I didn’t trust the ice. Granted, these vendors had permits, but the architecture is exactly as Neuwirth describes it: Elegant and very, very powerful. Imagine these transactions thrown out like a net over the entire city, and how fine the mesh would be!

Let’s stick with Thailand, since I have no knowledge of Lagos at all. I don’t think Neuwirth’s characterization of System D as DIY is completely accurate, at least in the American sense of, say, a homeowner building their own deck instead of hiring a carpenter. To slip into campaign mode for a moment, “You didn’t do it yourself.” Rather, given a tiny bit of capital, you can bootstrap a number of well-understood components, each of which fits smoothly with the others (as if there were an API), into a tiny going concern. However, that means the barrier to entry is very, very low, and that is why Neuwirth speaks of “tiny increments of profit.” Further, the real value of the store, given the low barriers to entry, isn’t in the cart, the recipes, or even in the regular clientele: It’s in the permit that gets them their slot on the street. (Location, location, location.) That permit is a rent, and where you have rents, you have rentiers. I would be very surprised, for example, if Neuwirth’s waterborn store owner were not under the protection of the local big man, exactly as she would be in Thailand. And the words “rentier economy” just don’t have the “carefree lilt” and “friendly resonances” that “System D” does.*

Rentier economy, of course, brings me right back to the United States. I’ve always wondered — and for some reason, our famously free press hasn’t covered this story — just what the 17.9% of the American population that’s disemployed is doing to survive. Surely, some of them have entered System D. (Bloggers who take contributions via PayPal are part way there already, as are eBay resellers. And as are other indviduals who do work under the table, become growers, or manufacture meth. Neuwirth celebrates the poet Alan Ginsberg for arriving in New York with nothing but his “good looks.”

To negotiate one’s affection: That too, is débrouiller.

NOTE * For example, was I the only one who wondered if the exchange of a bill for coins also included a “tiny increment” of money laundering?