Bank stress tests have become a contemporary exercise in “the emperor has no clothes”. Everyone by now (or at least everyone who pays attention) knows that the stress tests are an exercise in confidence building, with emphasis on the “con”. And even when they sorta work, they don’t work. The US stress tests, which have served as the model, had the Treasury saying that any bank that fell short in raising equity would get it from Uncle Sam. That reassurance, the actual “see not much evil” design of the tests (which experts deplored) plus lots of cheerleading allowed the big banks to raise a lot of equity. But the pretense that they were healthy also allowed the banks to pay back TARP funds and pay record bonuses in 2009 and 2010 rather than boost equity levels further. If the banks were as healthy as Geithner & Co. would have you believe, would we really have needed permanent ZIRP, which some have estimated as a $350 billion annual transfer to the banks, or QE2 and QE3?

The latest stress tests, those on Spanish banks, are hewing to the well established pattern. As Eurocrisis junkies may recall, Spain initially asked for “up to” €100 billion. Our reaction to that figure, back in July:

The first question is whether it is big enough. Even though the Spanish government is confident that €100 billion gives it an ample buffer, Spain’s unemployment level only recently gapped up to 25%. Without a fix for the underlying economy, it’s not hard for the powers that be to underestimate the stresses Spanish banks will face as the impact of job losses work their way through the economy.

After considerable theatrics, handwaving, and a rumor that the number would be €60 billion, the Spanish government announced that a study conducted by Oliver Wyman ascertained that in a worse case scenario, Spanish banks would need €59.3 billion. Awfully precise, that number. Everyone was relieved that the number was so much lower than the €100 billion that had been bandied about before that Spain’s banking problems were treated as if they were well nigh resolved.

In keeping with the usual half life for Eurorescues, here we are, a few months later, and confidence is evaporating. From Bloomberg, “Spain Banks Face More Losses as Worst-Case Scenario Turns Real.” Note that the Bloomberg story is in anticipation of a data release that occurred as I was drafting this post (I imagine the Bloomberg report will be updated accordingly):

Spanish bank stress tests by management consultants Oliver Wyman have factored in an economic contraction totaling 6.5 percent between 2012 and 2014 in an adverse scenario that the government and Bank of Spain said has a probability of about 1 percent. Analysts at Nomura and Citigroup disagree, saying spending cuts and economic conditions mean the worst-case outcome already looks feasible.

“You can’t attach a 1 percent probability to a scenario that already looks realistic,” Silvio Peruzzo, a European area economist at Nomura in London, said in a telephone interview yesterday. Spain’s gross domestic product will shrink by 6.2 percent between 2012 and 2014, he estimated.

Various studies have found that casual observers often do a better job of predicting than people who get deeply into the weeds. So I suggest we use the Richard Smith forecast and compare that with that of Oliver Wyman down the road. From Richard Smith, before the data release today in Spain:

I’ve been tracking the non-performing loan number since the spring. It seems to increase by EUR5-10Bn every month and it’s been doing that for 18 months or so. Today’s report (not out yet) covers the period up to the beginning (I think) of August, so it’s 2-3 months behind the actual Spanish economy, which obviously hasn’t got better since August (and won’t improve for the foreseeable future, either).

So it’s kind of a slow burn, no end in sight. FWIW I’ve got EUR200-300Bn pencilled in as the real capital shortfall at Spanish banks (number pulled from own backside, no credible basis for it). If the NPLs accumulate no faster than this, it’ll be at least a couple of years before my backside’s predictive power gets put to the test, even if the banks and authorities don’t play games with loss recognition. Perhaps something else will give way first.

Well, the data is out and per Reuters, the bad loans in August increased €5.3 billion, reaching a new high of 10.5%. This chart (again Reuters) shows how highly correlated non-performing loans are with unemployment: 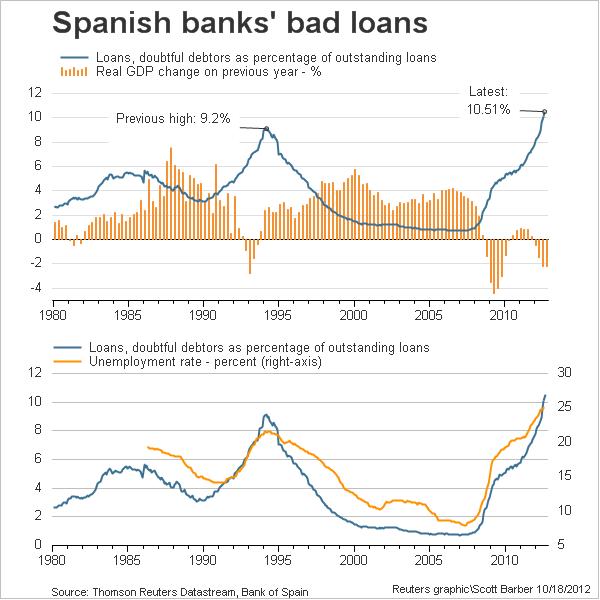 And remember, the newest set of tortures conditionality have yet to be inflicted on Spain…