Now that student loans are undeniably in bubble territory, the officialdom is starting to wake up and take notice. Evidence that students were taking on so much debt as a group that it was undermining their ability to be Good American Consumers wasn’t enough. A recent New York Fed study found that 94% of recent graduates had borrowed to help pay for their education, and average debt levels among student borrowers is $23,000. Remember, that average includes seasoned borrowers, who presumably borrowed less and also in many cases reduced the principal amount of their loans, so the average amount borrowed by recent grads is certain to be higher. Student debt is senior to all other consumer debt; unlike, say, credit card balances, Social Security payments can be garnished to pay delinquencies. As a result, it has contributed to the fall in the homeownership rate, since many young people who want to buy a house can’t because their level of student debt prevents them from getting a mortgage.

But despite some pious noises about the burden that student loans place on young Americans, there’s been no willingness in the officialdom to do much about it. But that may finally be changing. The latest Federal Reserve data is grim. 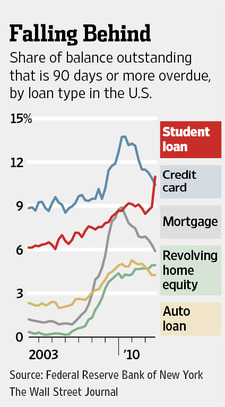 Student loan delinquencies are getting into nosebleed territory. The Wall Street Journal, citing New York Fed data, tells us that student debt outstanding increased 4.6% in the last quarter. Repeat: in the last quarter. Annualized, that’s a 19.7% rate of increase* during a period when other consumer borrowings were on the decline. And this growth is taking place while borrower distress is becoming acute. 11% of the loans were 90+ days delinquent, up from 8.9% at the close of last quarter. The underlying credit picture is certain to be worse, since many borrowers aren’t even required to service loans (as in they are still in school or have gotten a postponement, which is available to the unemployed for a short period). And it was the only type of consumer debt to show rising delinquency rates.

This is the new subprime: escalating borrowing taking place as loan quality is lousy and getting worse. And in keeping with parallel to subprime, one of the big reasons is, to use a cliche from that product, anyone who can fog a mirror can get a loan.

The most popular type of loan, Stafford loans, allow undergraduates to borrow up to $57,500, no questions asked. Perversely, this practice, in isolation, looks rational. Look, if you could put borrowers in virtual debt slavery, would you care much about lending standards? All you need to worry about is death and those few cases where borrowers are so clearly unable to ever work for a decent amount of money that they can get their student debt that they can get their loans reduced or discharged.

Things are so bad that each media report seems able to present anecdotes more extreme than previous accounts. The WSJ found a recent graduate of Embry-Riddle Aeronautical University in Daytona Beach whose education loans total nearly $230,000 for a college education that has enabled him to get a job that pays $60,000. And $184,500 of that total was borrowed by his unemployed, disabled mother through a program called Parent Plus.

The Administration’s responses look inadequate given the scale of the problem. From the WSJ:

In an effort to reduce defaults, the Education Department has tightened standards for loans to parents and grad students, prohibited federal lending to schools if more than a certain percentage of its graduates default over several years, and allowed borrowers to postpone payments during periods of “hardship.” The administration also has finalized rules that enable certain borrowers to have their remaining debt forgiven after 20 years, provided that they make monthly payments at 10% of discretionary income—down from the previous standard of 15%.

President Barack Obama championed easy-to-get loans during the campaign, calling higher education “an economic imperative in the 21st century.” A spokesman for Education Secretary Arne Duncan said the goal is “to make student loans available to as many people as possible,” and requiring minimum credit scores would block many Americans from going to college.

It isn’t hard to see why Team Obama is all on board with student debt peonage. Students have always been important forces in revolutionary movements: they are high functioning, live in dense communities, which facilitates organizing, and are naive enough to believe their actions can make a difference. Inescapable debt greatly increased the risk of fighting the established order; a mere arrest record hurts employment prospects. Of course, Republican criticism of overly generous student lending also has to be taken with a fistful of salt: Conservatives view higher education as indoctrination camps for socialism. So on odd days, they’ll try to rein in student funding and on even days, will blame unemployment on unskilled American workers losing out to the better trained and harder working Chinese. (This is not to deny that the US is in a serious higher education cost bubble, which in large measure is due to expenses that have nothing to do with the quality of teaching, such as much bigger and better paid administration staffs, and lavish facilities, like upscale gyms).

Like buying a house, getting a higher education was part of the American dream, a way to invest to build a secure future. Reckless lending and the costly efforts to socialize the losses are turning both into American nightmares.

*Annualized is NOT the quarterly rate X 4. It’s treated as a compound growth rate. And yes, I checked the WSJ figure against the Fed’s second quarter household debt and credit report to make sure they did mean a 4.6% increase in the quarter, as opposed to a 4.6% annualized rate of increase. This is also the start of a new school term for most students, so one would expect new students entering college to produce a bigger increase than in the other quarters of the year.