This is Naked Capitalism fundraising week. 356 donors have already invested in our efforts to shed light on the dark and seamy corners of finance. Join us and participate via our Tip Jar or WePay in the right column or read about why we’re doing this fundraiser and other ways to donate, such as by check, on our kickoff post or one discussing our current target.

Sunday was Veterans’ Day. Did you notice how little media coverage there was? In the past, you’d always see prominent commemoration of surviving World War I vets, and reflections on the sacrifices made in World War II, and even the less fondly remembered Korean and Vietnam Wars. The consequences of a volunteer military shielding the elites from combat duty. See also: Veterans Day: Honor the Soldier … Scorn the Chickenhawk George Washington

Eurozone crisis live: Greece gets more time as IMF and EU clash Guardian. You know it’s bad when a negotiation is live-blog-worthy

US to be world’s top energy producer Financial Times. Comment from Joe Costello: “You wouldnt believe how much the FT edited their IEA oil piece, the original had a bunch of stuff about how they were extrapolating numbers that couldnt be and the high depletion rates of shale wells — all gone now.”

The Places Where America’s Drones Are Striking, Now on Instagram Atlantic (skippy)

Petraeus scandal! I dont pretend to have the foggiest idea of what is going on here. However, I must note: the FBI was investigating since the summer. That means Holder knew, which means Obama knew. Any claims to the contrary are an insult to the intelligence of the audience.

Why Has the Other Woman In the Petraeus Sex Scandal Lawyered Up? Gawker (Lambert)

The Petraeus affair: notes on a scandal Michael Wolff, Guardian

Sandy: Lessons From The Wake Of The Storm Stoneleigh

Man Uses a Toyota Prius to Power his House During Weeklong Blackout OilPrice. As always, the affluent have more options.

Labor leaders set to meet with Obama Tuesday Politico (Paul Tioxon). If a Dem hack organization like the Center for American Progress is treated by Obama as a progressive group, this isn’t credible even as political theater.

Two million jobless Americans face their own fiscal cliff if unemployment benefits expire Daily Kos (Carol B). Yes, I know some readers are allergic to Kos, but I even link to Fox if it has something interesting to say. Notice that pushing the Dec. 31 deadline as something that much not be breached is key to getting bigger Medicare and Social Security cuts through (in dealmaking, more urgency is always better). So the Dems have managed to find one set of little people that will be hurt by going over the fiscal cliff to justify screwing others. Nothing like fights among the have-nots to divert attention from the haves.

Antidote du jour. This is Barbara B’s cat Zoe, and the scale is a bit misleading, since anything other than a very young turkey is sure to be much bigger than Zoe. Are wild turkeys becoming the new deer? My father hunted wild turkeys, and they are smart and (were) wily and leery of humans (also I must confess tasty if the turkey is not too old). Last year and this year, I’ve seen them wandering around pretty casually in Maine (as many as 7 together at one time) and one of my buddies in a Boston suburb saw a wild turkey happily being fed peanuts by his neighbors. 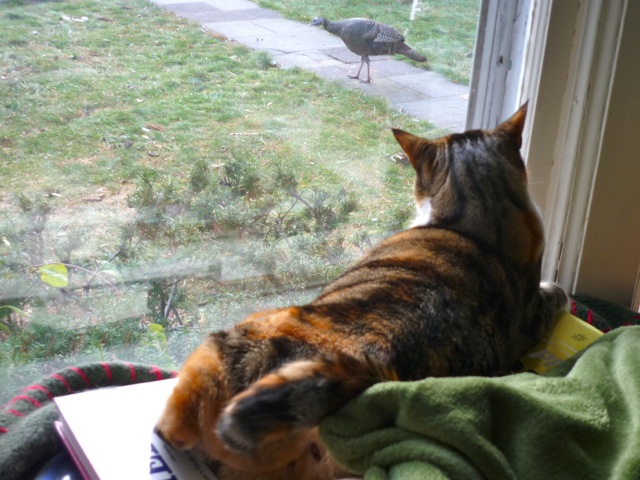