On June 7, 2001, HR 1836 the Economic Growth and Tax Relief Reconciliation Act was signed into law. This was the first and largest of several tax cut bills passed during the Bush Administration. It was estimated to cost $1.35 trillion with most of its benefits going to rich. So this should have spurred job creation. Give money to the “job creators” and they will create jobs, no?

The graph below (from the BLS’ Establishment survey) covering the Bush and Obama years shows, in fact, what happened. 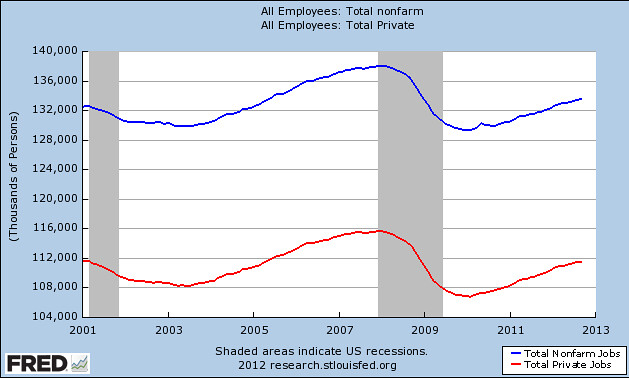 The blue line represents all nonfarm public and private jobs. The red line, jobs in the private sector. The difference between the two lines is public jobs. Though the scale is large, it is easily seen that public sector job number remained fairly stable during the period. It is the private sector which drove the overall changes in jobs numbers. [For those interested, the slight notch in the blue line in 2010 represents hiring for the Census.]

What we see is that the Bush tax cuts had little effect on the trajectory of job losses from the 2001 recession. We also see the effects of the housing bubble taking off in mid-2003 and its collapse into recession (December 2007) and meltdown (September 2008) with jobs falling below their 2003 lows. Here you could argue that the rich do create jobs, but these bubble jobs aren’t stable or permanent and are created at great cost to the non-rich. And while there is a recovery in private jobs from 2010 onward, we need to keep two things in mind. First, the quality of these post-bubble created jobs is generally poor. One sign of this comes from the Household survey where the growth in involuntary part time employment has increased from 3.332 million in January 2001 to 8.613 million in September 2012. Second, after 10 years of turning our economy over to the “job creating” rich, we are only just back to the level of private jobs we had in January 2001. In other words, the job creators in exchange for their trillion dollar tax cuts gifted the rest of us with a lost decade.

Actually, it is worse than a lost decade. Jobs are not people, and the chart above does not reflect 10 years of growth in the US working age population. To see this, we must look at people, the employed (from the BLS’ Household survey). 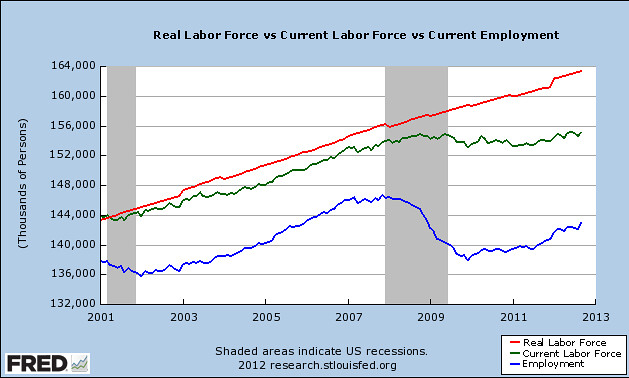 The blue line is the number of employed and is similar to the blue jobs line in the previous graph. The green line is the labor force (employed + unemployed as defined by the BLS) seasonally adjusted. The red line is my calculation of where the labor force should be, i.e. 67% of the working age population (non-institutional population over 16). This is based on the participation rate from October 1996 to June 2000 which for 44 of 45 months was at or above 67%. Notches in the red line come from annual revisions applied in January.

The difference between the green line (current labor force) and the blue line (current employed) represents the unemployed. We can see this has increased markedly after the onset of the 2007 recession. Also from this time, the green line of the current labor force went flat. The difference between the green line and the red line represents the increasing failure of the labor force to keep up with population growth. This area of the graph represents people who are defined out of the labor force by the BLS’ restrictive definition of unemployment but who would, from our experience from 1996 to 2000, work if jobs were available to them.

This graph shows the true magnitude of the failure of the “jobs creators”: bubble job formation, no growth in the labor force, and a 20.352 million gap in September 2012 between the employed and those who would work if work was available. Add in the poor quality of the jobs being created and the increased number of involuntary part time workers, and we have fail upon fail upon fail. It is Orwellian that after a decade of trillion dollar tax cuts and bailouts of the rich, and a steadily worsening jobs and employment picture for American workers, we are told to be kind to the rich and give them even more money because they are the “jobs creators”. With job creators like these, we are better off without them.