After the media uproar about HSBC’s deep involvement in the dirtiest sort of money-laundering, UBS’s mere Libor-fixing might look a tad pale. But the notice by the FSA clearly states that it regarded UBS’s conduct as far worse than that of Barclays, where the chairman, CEO, and president all stepped down. Of course, that was mainly because they dared try to shift blame to the Bank of England, claiming they’d gotten tacit approval, and the Bank would have none of it. But the severity of the sanctions against Barclays set a bar that hasn’t been met in subsequent regulatory actions. And Barclays is important because it shows the idea that you can’t go after top executives is a fiction. Barclays soldiers on despite the loss of its three top officers. Clemenceau was right: “The graveyards are full of indispensable men.”

By contrast, UBS is paying $1.5 billion in fines among three regulators: the FSA, the CFTC, and Finma, a Swiss regulator. The Department of Justice’s Lanny Breuer called the fraud “epic” yet only two staffers are targeted for prosecution: the apparent main actor, trader Tom Hayes, and his colleague Roger Darin, who are charged with mail fraud, price fixing, and conspiracy. Yet the FSA’s notice says that 40 individuals at the bank were involved in Libor manipulation, including 4 senior managers, and another 70 individuals were aware of it.

Bloomberg gives a good overview of the scheme if you don’t have time to read the FSA’s notice. The gaming was so extensive that the FSA noted that “every Libor and Euribor submission in currencies and tenors in which UBS traded is at risk of having been improperly influenced”. “Trader A” would often put in internal orders to manipulate prices for months at a time. The perps also bought the support of players at other firms, via offering profit sharing or other bribes, such as this one:

The FSA notice also confirms my pet theory that internal reviews are useless: 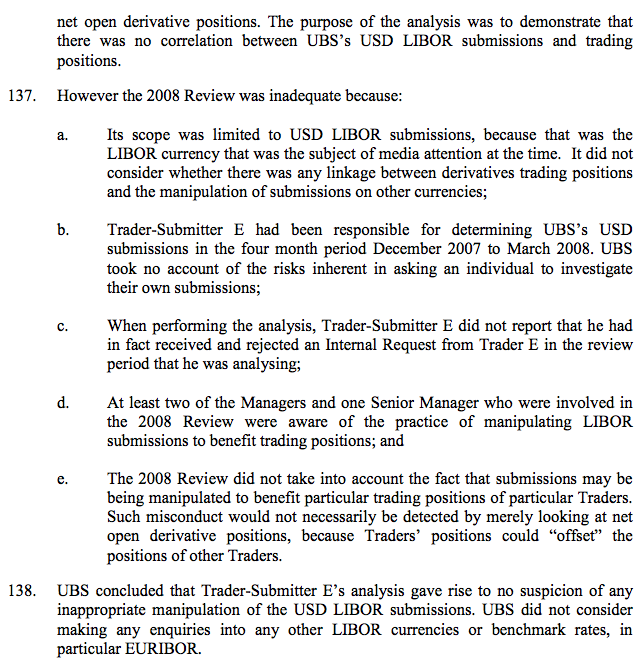 The FSA presents this review straight up when it’s hard to take it at face value. It’s hard to imagine that the legal department did not understand the conflicted role of Trader E and thus knew full well what sort of analysis he would gin up. Even though UBS implemented new procedures in 2008 and 2009, these appear to have been about as effective as corporate mission statements, due both to deficiencies in design and implementation. The directives were above all drafted to dampen down negative press (the Wall Street Journal had taken notice); managers who had been involved in the previous manipulation were involved in oversight; and the internal audit group did a mere “walk through” exercise.

This isn’t surprising if you understand the collusive relationship that has developed between front line staff and management in investment banking and trading businesses. As we wrote in ECONNED:

In the financial services industry version of looting, we instead have firms where operational authority is decentralized, vested in senior business managers, or “producers.” Because of industry evolution and perceived competitive pressures, these producers, as a result of formal incentives plus values held widely within the industry, focused solely on capturing the maximum amount possible in the current bonus period. The formal and informal rewards system thus tallies exactly with the topsy-turvy scheme of “maximizing current extractable value.”

In the past this behavior was positive, indeed highly productive, as long as it was contained and channeled via tough-minded oversight, meaning top management who could properly supervise the business. The main mechanisms are management reporting systems, risk management, and personal understanding of and involvement in day-to-day operations, plus external checks, such as regulations and criminal penalties. For a host of reasons, the balance of power has shifted entirely toward the forces that encourage looting. And because the damage that results cannot clearly be pinned on the top brass (like [the head of AIG’s Financial Products unit Joe] Cerullo, they have thin but plausible deniability), it is difficult to ascertain from the outside whether the executives merely unwittingly enabled this process or were active perpetrators.

It turns out that even with extensive examinations, it’s hard to find smoking guns to pin bad activity on top level managers. Remember, the nitty gritty falls to lower-level (although often handsomely paid) professional who communicate with sufficient frequency that it’s possible to find e-mail footprints. And to the extent any of this ground was covered in meetings, PowerPoint only gives the high points; it’s far from a complete record. Senior managers tend to be recipients rather than generators of information, and much of what they convey is verbal: reactions when people come to their desk or office, comments on more formal presentation. And by the time Libor manipulation became an official concern, they’s be sure to be particularly circumspect in any written remarks.

Based on the FSA notice, Felix Salmon is finally convinced of the widespread nature of bank abuses:

Other fines, for other banks, are sure to follow this one — but if Barclays was dreadful and UBS was much worse than Barclays, it’s hard to imagine that anybody has clean hands here. You want to know why pretty much the entire financial sector is still trading at less than book value? This is why: the number of investors who trust the banks is now zero, and banking seems to have become a game of picking up fraudulent nickels in front of a relentless justice-department steamroller. (And for good measure there are all the civil suits as well: the $1.5 billion that UBS is paying today is just a down-payment on the all-in cost of its Libor fraud.)

Felix suggests that UBS has taken the most radical action possible, by pretty much abandoning the fixed income business. Note this appears to have been the result of greatly higher capital requirements in Switzerland. But the Libor scandal may have played a role, since the fixed income operations were the one business unit of four that were led by former UBS managers after the UBS-Swiss Bank merger (even though the UBS name survived, Swiss Bank was actually the dominant player in the deal). The near-closure of the fixed income operations has the former SBC units as the final survivors of that merger.

Bear in mind that this is not the end of the financial toll for UBS. The regulatory orders and notices will facilitate private suits. But that is not at all the same as having the individuals who were ultimately responsible face meaningful consequences.

What Felix depicts correctly as an aggressive measure is still on the wrong axis. So far, the top echelon of UBS is unaffected by this epic scandal. Until we see executives suffer (and fines are insufficient if they reamin wealthy), it’s a no-brainer that this type of behavior will continue, albeit in different businesses and new guises.

Update: Predictably, the New York Times’ Dealbook makes much of the fact that a unit of UBS plead guilty of bank fraud, the first “big global bank” to do so in over 20 years. But it was the Japanese unit that agreed to plead guilty to charges by the Department of Justice. This is kabuki, pun intended.

The reason US authorities are so leery of even indicting a major financial firm is that Federal government bodies as well as many private parties must cease doing business. The loss of many counterparties and the sudden unwinding of trades is correctly seen as hugely damaging to the firm in question, a probably death knell. Even AIG, which is not a major trading firm and is more foreign than American in terms of the mix of its business, felt it could not withstand an indictment; that’s the only way the wily and ruthless Hank Greenberg could be forced to give up the helm.

But a Japanese subsidiary? It’s highly unlikely that any US firms deal with it directly, and it is US players that would be subject to the “don’t do business with it” restrictions. A US guilty plea might lead Japanese players to shun it, but Japan is not big on written regulations, everything is done by administrative guidance. The Dealbook story reads as if this plea was cooked up among the DoJ, CFTC, and UBS, with no involvement of the Japanese. The apparent lack of consultation and the general “not invented here” factor means there are decent odds that the Japanese officials won’t discourage domestic players from doing business with UBS and will take the view that the negative press is a sufficient deterrent. By contrast, when Japanese regulators get tough, they don’t bother with niceties like guilt pleas. For instance, Japanese regulators forced Citigroup to exit the private banking business in Japan in 2004, forcing it to shutter branches. So it is also possible the Japanese will issue their own sanctions after they have read the Western regulatory releases.

Admittedly, the DoJ’s hands were somewhat tied by a conditional immunity deal on antitrust charges in return for cooperation. But the single charge levied against the Japanese operation was for mail fraud, which was presumably not part of the pact. But the cheerleading piece is straight dictation from the DoJ. The worst part of this that it has been so long since the agency has done anything meaningful on the financial front that they might honestly believe this is a serious sanction.