Not to bring anybody down from the post-inaugural pink cloud, but possibly not (or, alternatively, so). In fact, the whole picture of how the Inaugural got financed seems a little sketchy.

The inaugural is being run by the Presidential Inaugural Committee (PIC), and we don’t know what PIC’s budget is. ABC:

The PIC also won’t say how much they have already collected or even what their goal was. [Brent Colburn, communications director for the PIC] explained [sic] that these are “moving budgets,” which won’t stabilize until after the inauguration.

Oh well. Although it does seem that the budgets could have been stabilizing in a downward direction: “Obama Inaugural Balls Limited To Two”. We also don’t know if PIC met their sales goal, whatever it might have been. Frederick News Post:

Asked about the committee’s goal for donations, Colburn declined to specify a figure but said the PIC is “on track to meet it.” “We feel very comfortable with our numbers,” he said.

Oh well. In fact, the whole PIC project has been marked by a lack of transparency; their site* publishes names of “benefactors” without amounts or even addresses. Or corporate affiliations. Guardian News:

“Here’s a guy who four years ago was Mr Transparency, vowing to change the way business was done in Washington, and now it all looks very much as though its business as usual once again. That’s puzzling,” [oh?] said the [Sunlight] foundation’s Kathy Kiely.

Not only is Obama inviting huge sums from individuals and corporations alike, he has also refused to disclose details on the sums given by donors and has only belatedly agreed to release their names. For transparency campaigners, Obama’s aggressive pursuit of cash takes some of the shine off a great celebration of the peaceful democratic transfer of power.

And cash in rawther large quantities:

Four years ago, inaugural contributions were capped at $50,000. This time? Oh, don’t stop. Please don’t stop. The Presidential Inaugural Committee was offering packages for between $10,000 and $1 million — check out the invites here.

Here’s Obama railing on Citizens United during 2010. Go to about the 2:15 minute mark in the speech for the reference:

Oh well. “We must act, knowing that our work will be imperfect.” 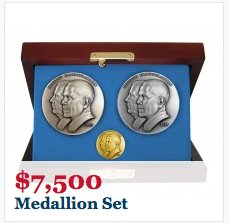 To be fair, Obama’s not soliciting huge sums from everybody; the PIC “store” — run by the reassuringly named Financial Innovations, Inc. — has plenty of tsotchkes. Still, even the case-hardened reporters at Pravda seem a little unsettled:

Four years ago, promising a new openness, the president banned corporate giving to the inauguration, limited gifts from individuals to $50,000 and released a full accounting of donations. This year, the sky’s the limit on gifts, corporations are good people [“my friend”] and the official roster of donors won’t include addresses or amounts for up to 90 days [how convenient].  … Administration officials have said the loosened donation rules were designed to reach out to [extort from] businesses whose executives felt spurned in the first term and to ease pressure on Democratic donors who feel squeezed dry after the campaign.

President Barack Obama’s decision to collect unlimited corporate cash for his inauguration, and to disclose less about donors than he did four years ago, has triggered broad speculation about what he really plans to do with the money. Theories range from the claim that Obama is getting a jump-start on funding his presidential library to conjecture that leftover campaign cash will prop up his grass-roots organizing operation, reportedly to be renamed Organizing for Action. Some say that it may even line the pockets of loyal campaign consultants. Obama’s inauguration money could also help jump-start the group known until now as Obama for America, which organizers will reportedly relaunch Jan. 20 as a 501(c)(4) social welfare nonprofit to be dubbed Organizing for Action.

So although PIC spokeshole Colburn may be “comfortable” about his “numbers,” I can’t imagine why anyone else would be. Actually, I’d be happy if his evasions meant that Obama didn’t squeeze another cohort of good citizens dry, because that would mean a corrupt project didn’t even succeed in its own terms. Second prize is a set of steak knives …

NOTE * I think this is my favorite piece of HTML markup ever. From the PIC site:

And how do people become “heroes”? Why, by clicking the link and signing up for the mailing list [snort]. Why do I think the White House Drupal team didn’t put this site together?

UPDATE Thanks to reader CK for pointing out that “hero” is the jargon these days for huge honkin’ banner. So I reached the snarky yet correct conclusion that data collection is everything to these guys, but from a false premise. Whoops!

NOTE Oh, the Maine organization that used to sponsor our event was priced out, so Portland’s Preti, Flaherty — I won’t say “provincial-grade fixers” but feel free to think it — had to wangle our venue from the New Zealand embassy. What are we, hobbits? But don’t worry! I feel as represented as I ever did!

NOTE Off topic, but can anybody tell me what “bridge the meaning of those words with the realities of our time” actually means? Is it grammatical? It reminds me of nothing so much as another famous word salad, the “Lord Kitchener Victory Speech” in Waiting for the Electrician or Someone Like Him: “[T]o make life whole, it’s as easy as a bridge!” (video).