The Wall Street Journal gives a teaser, in the form of excerpts from a speech to be made later today, on new rules the Consumer Financial Protection Bureau will be implementing to regulate how servicers treat homeowners who become severely delinquent on their mortgages. Unlike past efforts to stop servicer abuses, the CFPB’s new rules will cover all servicers, as opposed to bank-affiliated ones.

On paper, the proposed changes sound like a big step forward:

Under the rules laid out by the agency, lenders would be barred from starting the foreclosure process until borrowers have missed at least four months of payments, a move designed to give borrowers time to submit applications for help. This requirement would end so-called dual-tracking—starting foreclosure if a borrower has applied for help.

They are required to send a written notice to borrowers within 15 days of a second missed payment that includes examples of alternatives to foreclosure and information about housing counseling. Servicers are barred from completing a foreclosure if a borrower submits an application for aid more than 37 days before the home is scheduled to be repossessed.

The consumer regulator will have the power to police whether loan services are following these mandates.

The article noted that both consumer groups and investors wanted even stronger requirements for servicers to offer modifications in particular circumstances.

I’m highly skeptical that these new measures will make much of a difference unless the CFPB has aggressive monitoring and tough penalties, and those details have yet to be released. The sorry history of the servicing industry is, again and again, various servicing standards have been promulgated and are routinely violated, even with consent orders in place. Look at the state/federal mortgage settlement put in place early last year, which also put in place supposedly improved servicing standards, including an end to dual tracking.

The five big banks that agreed in a $25 billion mortgage settlement to reform foreclosure practices have continued to “dual-track” homeowners, an abusive technique that pushes families out of homes they thought their bank was trying to help them save, according to a new report by a monitor overseeing the settlement in California.

And if you think that was because banks were having trouble implementing new procedures, think again. Look at this pathetic bleat from the national settlement monitor, Joseph Smith, on January 4 (hat tip Lisa Epstein): 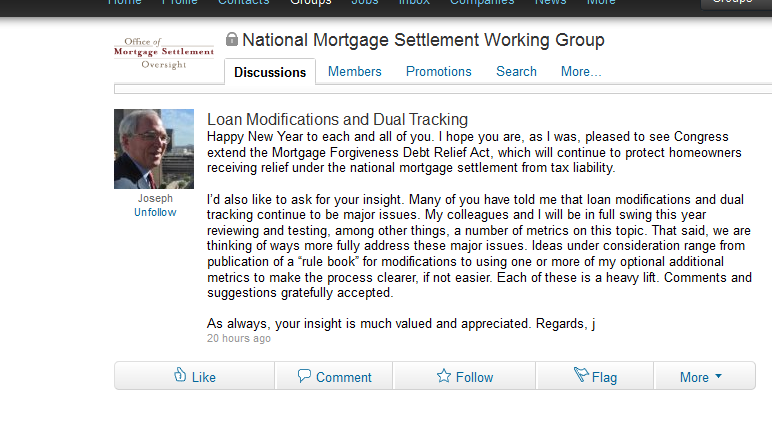 Translation: the banks are still fucking over borrowers, not sure what we’ll do, but we gotta look like we are doing something, so stay tuned!

Why aren’t these bad practices being stopped? As we discussed at depressing length last year (aided by Abigail Field’s close reading of the often mind-numbing exhibits on metrics), the state/federal settlement was a joke, in that its metrics allowed for remarkably high error rates, including an astonishing 1% wrongful foreclosures. Field estimated that had the rules been in place as of 2008, over 33,000 illegal foreclosures would have been deemed tolerable by regulators. Of course, we had more than that, but with even higher error rates allowed in other categories, it’s not hard to imagine that in the rare event a servicer was subjected to close scrutiny, he’d be able to get away with even more wrongful foreclosures by virtue of artful classification of the abuses (ie, if a foreclosure resulted from forced place insurance, the servicer no doubt would argue that the foreclosure would belong in a category relating to excessive fees rather than “wrongful foreclosure”).

And the bigger reason that regulators for now a full decade have had no success in cleaning up the servicing morass is that servicers aren’t paid enough to service delinquent loans well, let alone do loan mods, which requires even more effort and highly skilled staff. The only way for them to earn decent incomes on delinquent borrowers is by collecting more fees on them when they go into the foreclosure process and otherwise ignoring them. On top of that, servicers have terrible software both as a result of antiquated but widely used platforms like LPS’ Desktop Manager, notes passing through multiple servicers as a result of mergers and bankruptcies, and lousy database management and integration. I’ve asked repeatedly why borrower data can’t be ported into new systems, and I’m told by servicing industry insiders is not just a matter difficulties in resolving data field parameters, but that in the older systems, a lot of data is just not there.

So until the industry gets together (and this means, at a minimum, the “sell side” as in the originators, the servicers and investors) and comes up with a new fee structure for servicing, I don’t see how anything changes (I won’t elaborate here, but that would be a massive undertaking, and I’ve not seen this idea floated even as a wild-eyed aspiration). Servicers will abuse customers and argue to regulators that they can’t do better because doing better would lose them boatloads of money, so regulators will continue to enforce only weakly (the threat is they’d abandon the business, although I’m told a servicer can’t abandon its servicing obligation, but I would not underestimate banks trying to argue that parent organizations aren’t liable for the problems in servicing subsidiaries, and if the servicing sub goes broke, no one will take up the servicing rights if all it is is a license to lose money. I’m not sure they will have managed the corporate entities on enough of an arm’s length basis for that legal dog to hunt, but a regulator might also be loath to get into a pigfight that it might lose).

So the test of the effectiveness of these new rules will be whether, when they details are published, they elicit howls of pain from the banking industry, since proper servicing of loans gone bad loses money. If not, rest assured that the most long-suffering borrowers will see is marginal improvement, not badly needed large-scale reforms.