We’ll see how his term as head of the SEC’s enforcement division has served Robert Khuzami when we learn how well he lands, but his prickly responses to well-warranted criticism of his tenure at the SEC indicate he is at least awfully thin-skinned, and might even be finding that his dubious record has lowered his value in the secondary market. Given how many empty 42 longs seem to go from splashy position to splashy position, it seems hard to believe that anyone who’d be interested in Khuzami cares about his skills (the fact that he was a general counsel for the US operations of Deutsche means he’s more than adequate) as opposed to his connections and his brand value as a former senior regulator.

A disturbingly persistent pattern has emerged in U.S. Securities and Exchange Commission enforcement cases that involves three key elements: (1) The commission rarely sues individual defendants at large financial institutions, settling instead with the entity only; (2) when it does sue individual defendants, it frequently loses; and (3) the penalties collected by the commission from corporate defendants are declining and, in any event, are modest in proportion to the profits obtained.

Coffee goes on to discuss how the SEC has been unambitious in the number and nature of targets it has chosen in the wake of the crisis (he contrasts it unfavorably with the FHFA) and (quelle surprise!) has steered clear of pursuing the top brass at major firms (its failed suit against Angelo Mozilo the lone exception). And the SEC isn’t doing well even if you view it as handing out parking tickets rather than trying to punish and deter destructive behavior:

Coffee makes a modest recommendation: have the SEC emulate other agencies with enforcement powers, like the FDIC, and engage private counsel who would be paid on a contingent fee basis to help litigate large complex financial fraud cases.

A petulant adolescent wearing an adult suit peevishly takes on John Coffee point, by little point. I think it’s embarrassing. I wonder why he felt compelled to say these things in the main trade jourrnal for lawyers. Have his potential employers been sending signals that his deutsche issues and his public image as a toady for the 1% have turned him into damaged goods? Khuzani focuses on a NERA study with meaningless statistics (he obsesses over the little numbers that do nothing to contradict the truth of SEC’s massive failure as a competent enforcer in re Great Crash) instead of responding to the main charges against him that he should never have been hired at SEC because of his Deutsche past with CDOs, etc. Really super lame.

Khuzami and Canellos contend that the SEC really really had targeted important individuals (huh?) and that Coffee had mischaracterized the data on SEC settlements (from an NERA study) and the SEC really was doing better in 2011 and 2012 than in the 2003-2005 period. See the chart below and reach your own conclusions: 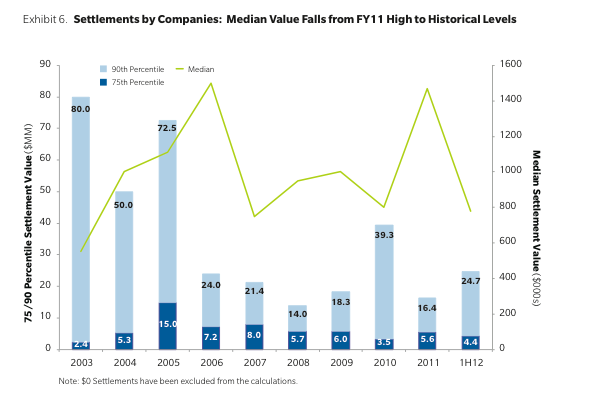 This section gives an idea of how strained the Khuzami/Canellos arguments are:

Furthermore, Coffee’s suggestion that SEC trial attorneys may be outmatched by defense counsel does not consider the overall pattern of courtroom success. While the SEC may be “an overworked, underfunded agency that is subject to severe resource constraints,” it is also staffed by some of the most talented, experienced and dedicated securities lawyers in the country. Many of its trial attorneys are former litigation partners at top law firms, former federal criminal prosecutors and other highly credentialed and experienced attorneys equal to the challenge of any case. While these facts suggest that Coffee is casting for solutions to a nonexistent problem, his proposed solution to replace government attorneys with private contingency-fee lawyers raises serious concerns.

He proposes that for big litigation matters the SEC engage private lawyers compensated based on a percentage of the monies they collect. However, that solution assumes that the SEC’s general goal is to sue as many deep-pocketed parties, and collect as much in penalties, as possible. But, as enforcer of the nation’s securities laws, the SEC’s goal is aggressively to uphold the law and serve the interests of justice. That means evaluating each case fairly, suing only those whom the evidence shows violated the law, assessing relative culpability of different participants, and assessing a penalty that is appropriate for the particular violation — which could be anything from a serious fraud to an unintentional violation of a more technical requirement.

Um, the SEC’s record shows that even if they do have talented staff, they have not been able to turn deploy them successfully. And Coffee was hardly suggesting to turn over the SEC’s entire enforcement operation to hired guns, but to give the ones that have both monetary potential and intrinsic enforcement value over to outside lawyers, and focus the SEC’s own staff on the remaining worthwhile enforcement targets.

Coffee roused himself to continue the debate, via a response to Corporate Crime Reporter. a key extract:

“The public’s dissatisfaction with SEC enforcement is not based on statistical data, but a sense that regulators have not held accountable anyone at the top of the major financial institutions that collapsed in 2008,” Coffee says.

“This was in sharp contrast to the savings and loan crisis in the late 1980s — where many went to prison — and WorldCom and Enron — where the CEOs were convicted and imprisoned.”

“The SEC did not even try to push the envelope,” Coffee says.

It would be nice to think that this little row meant that Khuzami’s job prospects were tarnished a tad by his performance at the SEC, but I strongly suspect we’ll see otherwise. But the fact that someone of Coffee’s stature is willing to rough him up is at least a sign that people in the know are not buying what the SEC and the Obama administration generally are selling.