At the instigation of reader Doug, I’m shedding light on a remarkably flattering assessment of the Department of Justice, as revealed by a clearly planted story at the Law.com blog. It’s not so much that this article (as offensive as it is) important in and of itself, but it serves to illustrate the phenomenon that folks at te M&A boutique Lazard (when it was the top expert in CEO psychopathy) called “believing your own PR”. This sort of thinking bears examining because it is widespread in both Corporate America and within the Beltway.

The DoJ, which has been notably missing in action during the Obama Administration, has staunch allies in the big corporate law game that aver that the public is simply unaware of all the good work that the DoJ has been quietly doing on their behalf. It is important to remember that big corporations have every interest in promoting the notion that weak overseers are effective, so the interests of major law firms and the DoJ are aligned in presenting the DoJ as a tough cop when it is anything but that. From the Law.com puff piece (emphasis original):

With Congress so worried about the national budget these days, maybe it should take fiscal tips from the U.S. Department of Justice. Federal enforcers obtained a whopping $9 billion in corporate settlements in 2012—a record amount that surpassed the previous high set in 2006 by nearly $3 billion…. 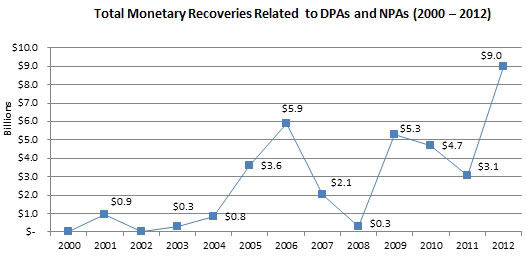 Among those companies contributing the most to the federal treasury were GlaxoSmithKline, which paid a $3 billion penalty for drug misbranding; HSBC Bank USA, N.A. and HSBC Holdings, with $1.9 billion for money laundering compliance failures and trade sanctions; and UBS AG, with a $1.5 billion fine for fraud.

The use of the agreements, as opposed to corporate indictments, continues at a near-record pace. There were 35 deals last year; the previous high of 39 was reached in both 2007 and 2010. 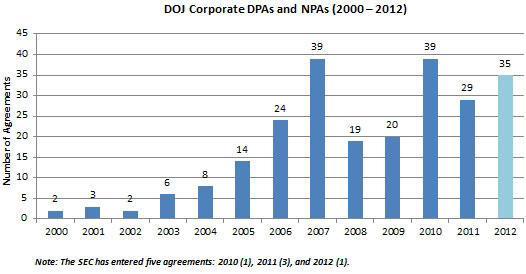 I’m sure readers can debunk this without my help, but as a matter of good practice, let’s parse this. First, the Bush administration was big corporate friendly; before the takeover by Rubinites, you’d expect a Democratic Administration to be tougher on corporations than Republicans. Second looking at outcomes without looking at context is highly misleading. It’s like looking at medical test results without knowing whether the patient is a 20 year woman with no history of major ailments versus a 65 year old smoker who has diabetes and has already had a heart attack. In 2006, the scope of financial fraud was recognized in only a few circles, and even when frauds have come to light, it typically takes prosecutors two years on average to perfect cases.

Note that none of these settlements relate to the financial crisis, but rather to money laundering, insider trading, Libor rigging (which was symptomatic of lack of oversight rather than a driver of the meltdown) and Glaxo.

Thus the results reflect how pervasive fraud is rather than how good a job the DoJ has done. As one lawyer put it:

It would be like Mayor Dinkins touting how effective he was at stopping crime because he had arrested so many crack dealers and users than he had in the past. In fact, crime was everywhere, that’s why he had so many arrests.

And predictably, Warin as mouthpiece for the corporations who prefer settling their dirty laundry, defends the practice:

And what of critics who say the deals don’t really deter bad corporate behavior because big companies just consider the fines a necessary cost of doing business?

“That’s nonsense,” retorts Warin. “I am in boardrooms and senior management meetings frequently, and no one perceives these matters as a cost of doing business.”

Besides being costly and damaging to a company’s reputation, a serious investigation is a huge distraction from the mission of the corporation, Warin said.

The “losses” for the fines need to be put into perspective of the profits that are being earned off of the criminal behavior. If they are significantly less than the profits, than no matter what anecdotal advice given by the source quoted, the incentive is to commit more crime and make more money. Also, it is of course individuals who profit off of the crimes, and if you do not punish/deter them (and why would a billion dollar fine deter a single executive if he/she got to keep theirs), then what meaning will it have from a deterrence perspective.

So while it is better to have some fines than no fines, the fact that the numbers are at record highs might just mean that there is record fraud and record willingness on behalf of DoJ to allow those responsible (and who profited) for the fraud to buy their way out with other people’s money (that is, shareholders).

Why bother shredding such a lightweight, laughable article? There’s been a vogue for metrics in performance management, and as this example illustrates, they are often garbage in, garbage out exercises.

Readers may recall how we highlighted how SEC enforcement chief Robert Khuzami got so riled up by very mild criticism by Simon Johnson in a New York Times blog post that he felt compelled to weigh in. Khuzami couldn’t possibly get so exercised if he were able to make an honest self-appraisal. But if you look at presentations he has made to Congress, like Warin on behalf of the DoJ, he defined his accomplishments in terms of how many cases his department has filed. In this environment, that’s like defining success in terms of how many parking tickets you have written. The most meaningful result for a regulator or prosecutor is one that is not readily quantified: have you made potential criminals afraid of you? Notice that the DoJ and SEC metrics don’t even consider what should be their fundamental concern, which is deterrence and meting out meaningful punishment to violators.