Aiee! CNS News found this tidbit (hat tip furzy mouse), contained in IRS final regulations published on January 31. Now admittedly these are examples for the purposes of illustrating how to make various calculations under the new regulations, but the assumptions are pretty clear. The cheapest type of plan in ObamaCare is a bronze plan, and bronze family plans for 4 and 5 person families are assumed to cost $20,000 in 2016. 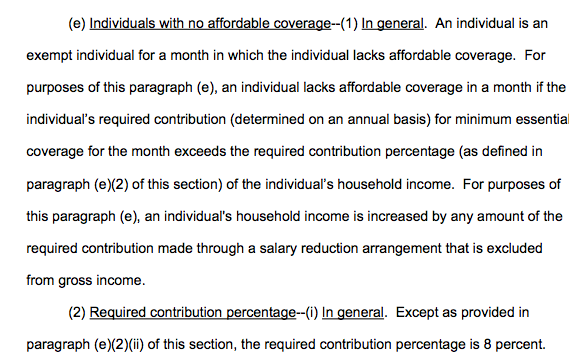 Now we see how affordable coverage thresholds relate to income in these examples, and notice the plan cost assumptions: 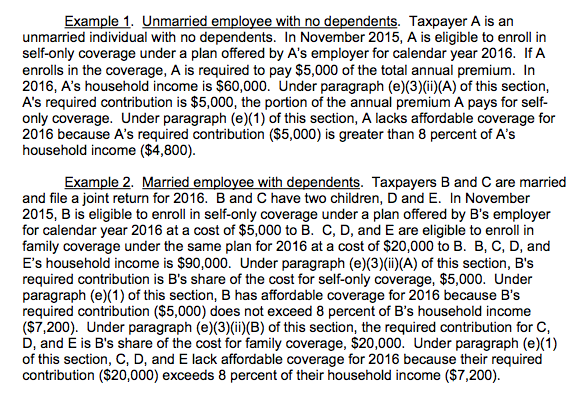 Now before you freak out and worry that that is what you will actually have to pay, there are various types of credits for people who are deemed by formula to “lack affordable coverage”. This is above my pay grade. But I’m pretty stunned at the premiums the IRS is assuming will be generally applicable. One of the benefits claimed for Obamacare was that it would help lower premiums by bringing healthy people who heretofore had gone un or underinsured into the risk pool. It looks like the insurers plan to more than offset that by the premiums they are charging for the higher risk groups they had heretofore managed to exclude. Or at least that will be their excuse.

Some of the backers of the ACA are finding it to be less of a deal than they had anticipated. From the Wall Street Journal (hat tip Tyler Cowen):

Labor unions enthusiastically backed the Obama administration’s health-care overhaul when it was up for debate. Now that the law is rolling out, some are turning sour.

Union leaders say many of the law’s requirements will drive up the costs for their health-care plans and make unionized workers less competitive. Among other things, the law eliminates the caps on medical benefits and prescription drugs used as cost-containment measures in many health-care plans. It also allows children to stay on their parents’ plans until they turn 26.

To offset that, the nation’s largest labor groups want their lower-paid members to be able to get federal insurance subsidies while remaining on their plans. In the law, these subsidies were designed only for low-income workers without employer coverage as a way to help them buy private insurance.

I expect the gnashing of teeth over the ACA to get louder as it is rolled out. We said at the time, and we’ll say it again: this plan is a gimmie to Big Pharma and the health insurers. It makes the underlying problem of the American health care industry, that of excessive costs, only worse. The predictable outcome will be costly insurance that does not cover much. Expect it to be OK on routine care, restrictive on preventative care (that may not be entirely bad given how much doctors overtest) and stingy on big ticket items.