Eurozone policy seems driven by market sentiment. This column argues that fear and panic led to excessive, and possibly self-defeating, austerity in the south while failing to induce offsetting stimulus in the north. The resulting deflation bias produced the double-dip recession and perhaps more dire consequences. As it becomes obvious that austerity produces unnecessary suffering, millions may seek liberation from ‘euro shackles’.

The Facts: Austerity and Spreads

There is a strong perception that countries that introduced austerity programs in the Eurozone were somehow forced to do so by the financial markets. Is this perception based on a reality? Figure 1 shows the average interest rate spreads in 2011 on the horizontal axis and the intensity of austerity measures introduced during 2011 as measured by the Financial Times on the vertical axis. It is striking to find a very strong positive correlation. The higher the spreads1 in 2011 the more intense were the austerity measures. The intensity of the spreads can be explained almost uniquely by the size of the spreads (the R-squared is 0.97). Note the two extremes. Greece was confronted with extremely high spreads in 2011 and applied the most severe austerity measures amounting to more than 10% of GDP per capita. Germany did not face any pressure from spreads and did not do any austerity.

Figure 1. Austerity measures and spreads in 2011 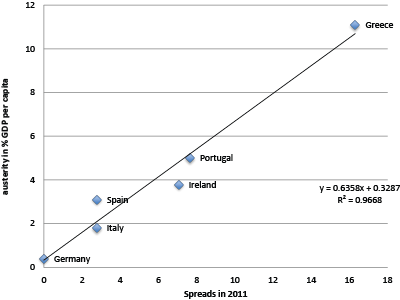 There can be little doubt. Financial markets exerted different degrees of pressure on countries. By raising the spreads they forced some countries to engage in severe austerity programs. Other countries did not experience increases in spreads and as a result did not feel much urge to apply the austerity medicine.

The next question that arises is whether the judgement of the market (measured by the spreads) about how much austerity each country should apply was the correct one. There are essentially two theories that can be invoked to answer this question. According to the first theory, the surging spreads observed from 2010 to the middle of 2012 were the result of deteriorating fundamentals (e.g. domestic government debt, external debt, competitiveness, etc.). Thus, the market was just a messenger of bad news. Its judgement should then be respected. The implication of that theory is that the only way these spreads can go down is by improving the fundamentals, mainly by austerity programs aimed at reducing government budget deficits and debts.

Another theory, while accepting that fundamentals matter, recognises that collective movements of fear and panic can have dramatic effects on spreads. These movements can drive the spreads away from underlying fundamentals, very much like in the stock markets prices can be gripped by a bubble pushing them far away from underlying fundamentals. The implication of that theory is that while fundamentals cannot be ignored, there is a special role for the central bank that has to provide liquidity in times of market panic (De Grauwe 2011).

This decision of the ECB provides us with an interesting experiment to test these two theories about how spreads are formed. Figure 2 provides the evidence. On the vertical axis we show the change in the spreads in the Eurozone from the middle of 2012 (when the ECB announced its program) to the beginning of 2013. On the horizontal axis we present the initial spread, i.e. the one prevailing in the middle of 2012. We find a surprising phenomenon. The initial spread (i.e. in 2012Q2) explains almost all the subsequent variation in the spreads. Thus the country with the largest initial spread (Greece) experienced the largest subsequent decline; the country with the second largest initial spread (Portugal) experienced the second largest subsequent decline, etc. In fact the points lie almost exactly on a straight line going through the origin. The regression equation indicates that 97% of the variation in the spreads is accounted for by the initial spread. Thus it appears that the only variable that matters to explain the size of the decline in the spreads since the ECB announced its determination to be the lender of last resort is the initial level of the spread. Countries whose spread had climbed the most prior to the ECB announcement experienced the strongest decline in their spreads – a remarkable feature. 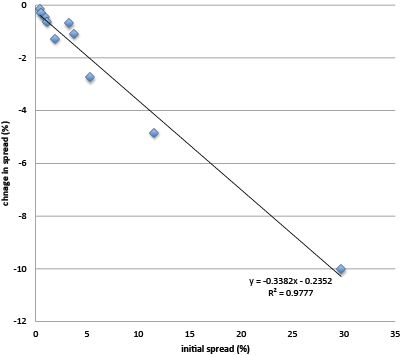 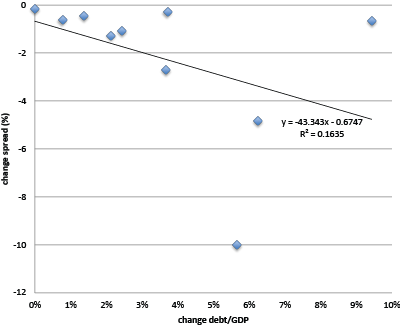 We can now give the following interpretation of how the spreads exerted their influence on policymakers and led them to apply severe austerity measures. As the spreads increased due to market panic, these increases also gripped policymakers. Panic in the financial markets led to panic in the world of policymakers in Europe. As a result of this panic, rapid and intense austerity measures were imposed on countries experiencing these increases in spreads. The imposition of dramatic austerity measures was also forced by the fact that countries with high spreads were pushed into a liquidity crisis by the same market forces that produced the high spreads (De Grauwe 2011). This forced these countries to beg ‘cap in hand’ for funding from the creditor countries.

The Effects of Panic-Driven Austerity

How well did this panic-induced austerity work? We provide some answers in Figures 4 and 5. Figure 4 shows the relation between the austerity measures introduced in 2011 and the growth of GDP over 2011-12. We find a strong negative correlation. Countries that imposed the strongest austerity measures also experienced the strongest declines in their GDP. This result is in line with the IMF’s recent analysis (IMF 2012). 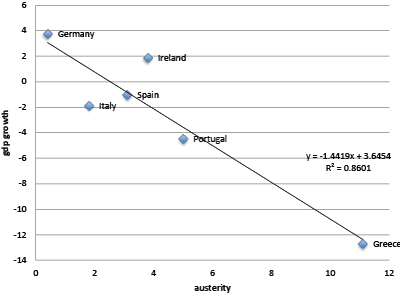 Some will say that this is the price that has to be paid for restoring budgetary orthodoxy. But is this so? Figure 5 may lead us to doubt this. It shows the austerity measures and the subsequent change in the debt-to-GDP ratios. It is striking to find a strong positive correlation. The more intense the austerity, the larger is the subsequent increase in the debt-to-GDP ratios. This is not really surprising, as we have learned from the previous figure, that those countries that applied the strongest austerity also saw their GDP (the denominator in the debt ratio) decline most forcefully. Thus, it can be concluded that the sharp austerity measures that were imposed by market and policymakers’ panic not only produced deep recessions in the countries that were exposed to the medicine, but also that up to now this medicine did not work. In fact it led to even higher debt-to-GDP ratios, and undermined the capacity of these countries to continue to service the debt. Thus the liquidity crisis that started all this, risks degenerating into a solvency crisis. 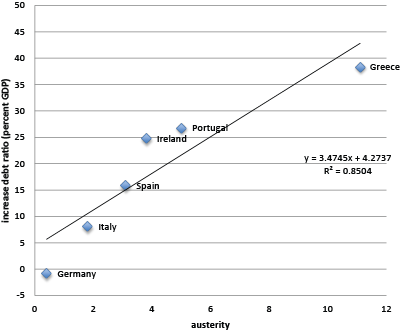 Source: Financial Times and Datastream. Note: The Greek debt ratio excludes the debt restructuring of end 2011 that amounted to about 30% of GDP.

Three conclusions can be drawn from the previous analysis.

• Since the start of the debt crisis financial markets have provided wrong signals; led by fear and panic, they pushed the spreads to artificially high levels and forced cash-strapped nations into intense austerity that produced great suffering.

They also gave these wrong signals to the European authorities, in particular the European Commission that went on a crusade trying to enforce more austerity.

Thus financial markets acquired great power in that they spread panic into the world of the European authorities that translated the market panic into enforcing excessive austerity. While the ECB finally acted in September 2012, it can also be argued that had it acted earlier much of the panic in the markets may not have occurred and the excessive austerity programs may have been avoided.

• Panic and fear are not good guides for economic policies.

These sentiments have forced southern EZ countries into quick and intense austerity that not only led to deep recessions, but also up to now, did not help to restore sustainability of public finances. On the contrary, the same austerity measures led to dramatic increases of the debt-to-GDP ratios in southern countries, thereby weakening their capacity to service their debts.

In order to avoid misunderstanding, we are not saying that southern European countries will not have to go through austerity so as to return to sustainable government finances. They will have to do so. What we are claiming is that the timing and the intensity of the austerity programs have been dictated too much by market sentiments of fear and panic instead of being the outcome of rational decision-making processes.

• Financial markets did not signal northern countries to stimulate their economies, thus introducing a deflationary bias that lead to the double-dip recession.

The desirable budgetary stance for the Eurozone as whole consists in the south pursuing austerity, albeit spread over a longer period of time, while the north engages in some fiscal stimulus so as to counter the deflationary forces originating from the south. The northern countries have the capacity to do so. Most of them have now stabilised their debt-to-GDP ratios. As a result, they can allow a budget deficit and still keep their ratio constant. Germany in particular could have a budget deficit of close to 3%, which would keep its debt-to-GDP ratio constant. Given the size of Germany, this would allow for a significant stimulus for the Eurozone as a whole.

The intense austerity programs that have been dictated by financial markets create new risks for the Eurozone. While the ECB 2012 decision to be a lender of last resort in the government bond markets eliminated the existential fears about the future of the Eurozone, the new risks for the future of the Eurozone now have shifted into the social and political sphere. As it becomes obvious that the austerity programs produce unnecessary sufferings especially for the millions of people who have been thrown into unemployment and poverty, resistance against these programs is likely to increase. A resistance that may lead millions of people to wish to be liberated from what they perceive to be shackles imposed by the euro.