What happens after the crisis ends? This column estimates the long-term effects of the current cyclical downturn on Eurozone economies. In the absence of any real impetus for bold reform, estimates show that the damage will indeed be long lasting, permanently impairing growth for an ageing population that requires higher growth capacity more than ever before.

The financial crisis that erupted in 2008, prolonged by a sovereign crisis in the Eurozone, led to a massive contraction in trade, as well as in investment in physical and human capital; thus undermining the foundations of future growth. This may well continue as growth will not rapidly rebound while deleveraging slowly proceeds across Eurozone economies. Empirical evidence suggests deleveraging episodes accompanied by a housing crisis will take on average five and a half years across high-income OECD countries (or seven years when accompanied by a banking crisis (Aspachs-Bracon et al. 2011, IMF 2012).

Little resolution of banking-sector difficulties in the Eurozone suggests that deleveraging and credit will probably remain slow and impaired for much longer than previously thought. Recoveries that happen without credit are, on average, a third longer than recovery episodes with credit (Darvas 2013). Eurozone policymakers have withdrawn support for a policy mix – in the form of rapid attempts at fiscal tightening, monetary easing providing liquidity to banks and not to end users – at a time when a large proportion of Eurozone governments (especially the most fragile ones) had engaged in structural reforms that deliver higher growth in the future but tend to dampen it in recession (Bouis et al. 2012).

All of this is compounded by very challenging trends in demographic changes that will prove a major headwind for long-term growth (Nuño et al 2012).

Damages to trend growth are notoriously difficult to assess, as methods of measuring trend growth tend to produce estimates that are heavily influenced by the estimation method itself (see OECD 2009). In addition, observed GDP growth tends to be revised until several years after the first estimate. The OECD (2009) shows that such revisions to trend growth and to the output gap can in fact be equivalent to several percentage points, thus making these exercises highly fragile. Empirical evidence shows that trend growth was, on average, overestimated prior to the crisis, but underestimated following the crisis (Borio 2012).

We draw simple scenarios in order to assess the extent of the crisis’s effect on damages to trend growth, and the scope for policy to reverse these damages. Our work is based on a simple Solow growth-accounting methodology. To take into account the impact of the crisis, we distinguish three time periods:

Thus we can compare the evolution of the three underlying sources of growth prior to and during the crisis, and make simple transparent assumptions on how they can evolve, post-crisis.

Trend growth before the crisis

Results prior to the crisis are in line with most estimates (Figure 1): Spain had the highest trend growth (3.7% per annum, thanks to an inflated rise of capital and low qualified labour); followed by France; with Germany and Italy in the lowest positions because of subdued labour contribution in the former, and poor productivity in the latter (see Table 1).

Whereas capital and productivity growth lifted GDP growth in northern Eurozone countries, with little contribution from labour growth, the opposite occurred in Spain and Italy (OECD Sources of Growth 2013). Productivity was flat in Italy and negative in Spain (as can be expected when growth comes from low-technology content sectors), but capital and labour growth, especially the quantity of labour, inflated GDP growth.

Trend growth during the crisis

Results for the crisis period are also similar to other ‘standard’ analyses, because we assume an end year of 2014 for the crisis. We proceed in a similar way to the European Commission by assuming that the output gap is close to closing in on pre-crisis levels by the end 2014 (see AMECO). For GDP inputs, we use AMECO projections, using total factor productivity as the adjusting residual.

Based on these assumptions, growth accounting provides us with an estimate of the extent of the damages caused by the crisis and the magnitude of the drop in growth over this period (see Table 2). A common feature of all economies is a collapse in productivity, which is typical of a big recession. In addition, Spain and Italy also underwent a very sharp labour contraction.

Trend growth after the crisis

The post-crisis exercise is more interesting, though more perilous in terms of measurement, because we need to project the evolution of fundamentals – investment, labour inputs and total factor productivity. We run several scenarios for each of the three input factors in order to span a wide range of scenarios, and provide a framework for assessing:

We also assume several things about capital and productivity:

A downside risk is that investment growth does not recover fully (for example, because banks fail to provide the necessary funding). In this case, we assume investment growth is only half what it was before the onset of economic turmoil. An upside risk to our estimates would be if investment were to bounce back by 2020 to the level that would have prevailed had the financial crisis not occurred.

One where we assume strong hysteresis and that the working-age levels stay at the European Commission’s 2014 estimates (i.e. permanently higher than before the crisis), and another where unemployment rate steadily declines (using IMF projections) on the back of the ongoing, albeit slow, recovery.

As a result, we filter total factor productivity over the whole historical period (1995-14) and use this value for the projection period (2015-20). We also estimate productivity through a convergence equation, which would slightly lift productivity in peripheral countries in the future. In that case, we use the framework of a standard convergence equation with a large sample of countries, controlling for country-specific effects, which allows speed of catch-up to vary with the distance to the technology frontier and the initial level of human capital. To this effect, we estimate total factor productivity through a Nelson-Phelps technology diffusion model similar to Foure et al. (2010).

This exercise suggests that in the absence of policy reforms, trend growth will have been damaged significantly, by at least one percentage point, post-crisis, compared with pre-crisis levels, although our range of estimates is quite large depending on the set of assumptions being used. However, under the most favourable set of assumptions which would assume significant policy reforms (investment recovers to pre-crisis growth levels, rapid decline in the unemployment, rapid catch-up with the technology leader), trend growth would be in line with pre-crisis levels and could even be higher in Italy and Germany which had the lowest trend growth prior to the crisis.

Under that scenario, trend growth for the four main Eurozone countries lies between little less than 1% and slightly less than 2%, post-crisis, with trend growth highest in Spain and France; and the lowest for Italy and Germany. Ageing explains a large part of this variation (see Table 3). Lower productivity and employment are the main reasons for the drop in trend growth compared to pre-crisis levels. The evolution of investment is the more sensitive assumption in determining trend growth in our set of scenarios, though the impact is not uniform across countries.

In the event that investment fails to recover quickly – perhaps because bank health takes too long to restore and transmission mechanisms of monetary policy remain impaired – or unemployment levels take longer to fall than in previous recovery episodes, then trend growth would be significantly lower for longer. Trend growth might well remain negative in Spain and Italy, and may fail to increase for Germany or France. Conversely, should economic policy support a faster investment recovery and swifter return to work of the unemployed, trend growth would return to something closer to that of pre-crisis levels. Allowing for convergence in productivity would also offer some pick up in productivity growth in periphery countries. 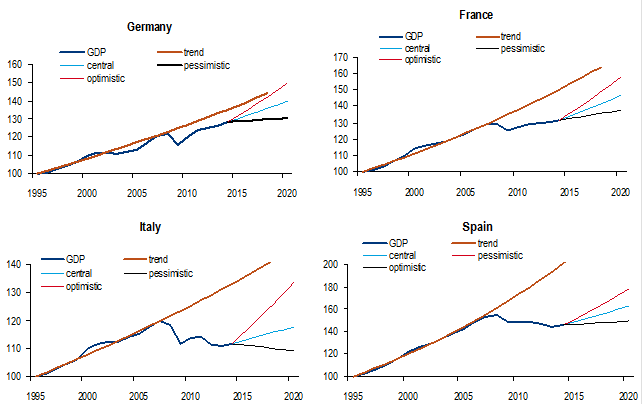 With a simple Solow framework, we assess to what extent the cyclical downturn has damaged European economies in the long run. In the absence of impetus for bold reform, this exercise shows the damage will indeed be long lasting, permanently impairing growth in a context of an ageing population that needs higher growth capacity than ever before.

Borio, C (2012), “The financial cycle and macroeconomics: What have we learnt?”, BIS Working Papers 395, Bank for International Settlements.