Let us take a look at the careers of two men who live in the incestuous world that C. Wright Mills, in his classic and still-contemporary 1956 study, called The Power Elite. As Mills wrote and many others since have found, the really key people at the rarified heights of American power and policy tend to rise up from a narrow group of universities, enter the same country clubs (like the Council on Foreign Relations), and in their careers revolve seamlessly between high positions in the “private” and “public” sectors. They serve the needs of the far-less-than-one-percent who effectively own both sectors; in the course of which they usually make themselves stinking rich (in those cases when they weren’t already born that way). If you want to see a great film about these meritocrats (a term originally coined ironically in the 1950s by UK political scientist Michael Young), we recommend Lewis Lapham’s terrific documentary musical, “The American Ruling Class” (2005), which also foresaw the nascent rebellion of the 99%.

Now let us meet David S. Cohen of the US Treasury Department and Stuart Levey of HSBC – or is it the other way around?

1) Since June 2011, the Under Secretary for Terrorism and Financial Intelligence at the United States Department of the Treasury has been one David S. Cohen (Yale Law School, 1989). Quoting his bio at the Treasury Department’s website, “As Under Secretary for Terrorism and Financial Intelligence, Cohen leads the Treasury Department’s policy, enforcement, regulatory, and intelligence functions aimed at identifying and disrupting the lines of financial support to international terrorist organizations, proliferators, narcotics traffickers, and other illicit actors posing a threat to our national security. He is also responsible for directing the Department’s efforts to combat money laundering and financial crimes” (all italics ours). Cohen had already been Assistant Secretary for Terrorist Financing since 2009.

2) Based on these portfolios, we would rightly expect Mr. Cohen’s responsibilities during the last two years to have included gathering intelligence on the notorious money laundering entity HSBC. The “too big to fail” megabank recently admitted to laundering billions of dollars for the Mexican and Colombian drug cartels and to violating rules on dealings with “terrorist” organizations in a settlement with the Justice Department that absolved all HSBC executives from a federal criminal investigation (December 2012).

3) David S. Cohen (it’s important to distinguish him from other David Cohens of note) also worked for the Treasury in 1999 to 2001, when he “was involved in crafting legislation that formed the basis of Title III of the USA PATRIOT Act, the 2001 update to the Bank Secrecy Act that provided Treasury new tools to combat money laundering and the financing of terrorism.” Once again, sounds just like HSBC!

4) In between his first stint at Treasury and his current stint at Treasury, Cohen worked seven years for the ginormously influential DC legal firm, Wilmer Hale Cutler Pickering Hale and Dorr LLP, where he focused on “civil and criminal litigation, the defense of regulatory investigations into accounting and financial fraud, and anti-money laundering and sanctions compliance advice for a broad range of financial institutions including banks, broker-dealers, insurance companies, mutual funds and hedge funds.” In other words, in his current job at the Treasury Cohen is supposed to investigate the very same kind of entities that he had spent seven years defending while at Wilmer Hale.

5) The doors for Cohen have been revolving a lot longer than that. In the 1990s, Cohen practiced nine years at the DC firm Miller, Cassidy, Larroca & Lewin LLP, specializing in “white collar criminal defense and civil litigation,” again working as defense counsel for the kinds of firms he is now supposed to be investigating. Miller Cassidy later merged into an even more ginormous DC lawyer-lobbyist entity, Baker Botts LLP of Dallas and Washington (in which the “Baker” is none other than the former Secretary of State and Bush family consigliere, James Baker).

While at Miller Cassidy, Cohen would have surely made the acquaintance of another high-powered lawyer working there in nearly all of the same years. His name is Stuart Levey.

So who is Stuart Levey and why do we care?

6) Stuart Levey (Harvard Law School, 1989), worked at Miller Cassidy (the later Baker Botts) as a litigation practitioner for 11 years before joining the Justice Department in 2001. In 2004, the Bush government appointed him the first Under Secretary for Terrorism and Financial Intelligence in the US Department of the Treasury, a position in which he served also under President Obama until February 2011. In other words, Stuart Levey was the almost-direct predecessor to David S. Cohen as the “top cop” at Treasury for investigations into money laundering, terrorism and the international drug cartels. And this after both men had once worked at Miller Cassidy for nearly a decade in the 1990s.

6) Where is Stuart Levey today? Why, he’s on the HSBC Board of Directors as the Chief Legal Officer of HSBC Holdings plc, the parent company of HSBC operations worldwide. We got all this information about Mr. Levey from his HSBC bio page. There we learned that he has been the drug money-laundering megabank’s Chief Legal Officer since January 2012. Thus, he would have been intimately involved in (and legally responsible for) the crafting of HSBC’s December 2012 “Get Out of Jail Free” settlement with the Justice Department. Intelligence from David S. Cohen’s group at Treasury must have also played a role in advising Justice on the historic settlement.

Our last claim is, again, based on Cohen’s portfolio; if he was not at all involved in the process leading to the DOJ/HSBC settlement, then just what is the purpose of his job?

Until now we have been privy to few details about what inside dealings went on in advance of the settlement, other than admissions from the recently disgraced and departed Deputy Attorney General Lanny Breuer that DOJ indeed considered the bank too big to fail. Last week, however, Attorney General Eric Holder reinforced before the Senate Banking Committee that he believes the executives of some banks are impossible to prosecute under criminal law because the possible failure of their institutions would risk a general financial crash.

It gets better. Also last week, David Cohen and officials from other ostensible financial regulatory agencies were called to testify before the Senate Banking Committee on the failure to bring prosecutions of banking criminals. Sen. Elizabeth Warren questioned Cohen about the HSBC case. We’ll let the excellent coverage by Erika Eichelberger in Mother Jones tell the rest of the story:

…it’s not just HSBC—this is a systemic problem. Ten banks have been penalized in recent years for failure to comply with anti-money laundering rules. The Senate banking committee held the hearing in order to interrogate regulators at the Federal Reserve, Treasury Department, and the Office of the Comptroller of the Currency about why they are not doing more to stop these kinds of shenanigans.

All of the regulators said they were working on improving regulations and enforcement and protested that it was up to the Department of Justice—not them—to decide whether prosecution was appropriate. (The Justice Department did not have a witness at the hearing.) They were reluctant to weigh in on whether they thought HSBC should have faced trial, even though they consult closely with the DOJ on bank activities. That infuriated Warren:

The US government takes money laundering very seriously for a good reason. And it puts strong penalties in place… It’s possible to shut down a bank… Individuals can be banned from ever participating in financial services again. And people can be sent to prison. In December, HSBC admitted to… laundering $881 million that we know of… They didn’t do it just one time… They did it over and over and over again… They were caught doing it, warned not to do it, and kept right on doing it. And evidently made profits doing it. Now, HSBC paid a fine, but no individual went to trial. No individual was banned from banking and there was no hearing to consider shutting down HSBC’s actives in the US… You’re the experts on money laundering. I’d like your opinion. What does it take? How many billions of dollars do you have to launder for drug lords and how many sanctions do you have to violate before someone will consider shutting down a financial institution like this?

David Cohen, the undersecretary for terrorism and financial intelligence at Treasury, responded that his department had imposed on HSBC “the largest penalties we’ve imposed on any financial institution.”

Warren got annoyed. “I’m asking: what does it take to get you to move towards even a hearing to consider shutting down operations for money laundering?” she said.

Cohen kept evading and Warren got more annoyed. “I’m not hearing your opinion on this,” she said. “What does it take even to say, ‘here’s where the line is’? Draw a line, and if you cross that line you’re at risk for having the bank closed.”

Cohen said he had views, but couldn’t get into it.

“It’s somewhere beyond $881 million in drug money,” Warren concluded on her own, and went on to spell out the injustice of it all. “If you’re caught with an ounce of cocaine, you’re going to go to jail… But if you launder nearly a billion dollars for international cartels and violate sanctions you pay a fine and you go home and sleep in your own bed a night.”

The claim from Treasury officials at the hearing was that they couldn’t move to pull HSBC’s license to bank as long as Justice had not filed criminal charges. So Treasury and the other agencies couldn’t do nothin’, because Justice was too busy doing nothin’, apparently because Treasury wasn’t advising them to do anythin’.

As we consider this round-robin of abdication from the pretense that the government has either the responsibility or the power to prosecute the World’s Gangster Banks, remember our meritocratic takeaway for today:

HSBC’s top counsel, Levey, preceded Cohen at his present job as the top money laundering “investigator” at Treasury, after both spent nearly a decade together at the same high-priced DC law firm.

So Treasury and the other agencies couldn’t do nothin’, because Justice was too busy doing nothin’, apparently because Treasury wasn’t advising them to do anythin’.

Speaking of Democratic fingerpointing and blame-shifting, this cartoon by New York cartoonist Thomas Nast, of another corrupt regime in the last Gilded Age — Boss Tweed’s Tammany Hall — comes to mind: 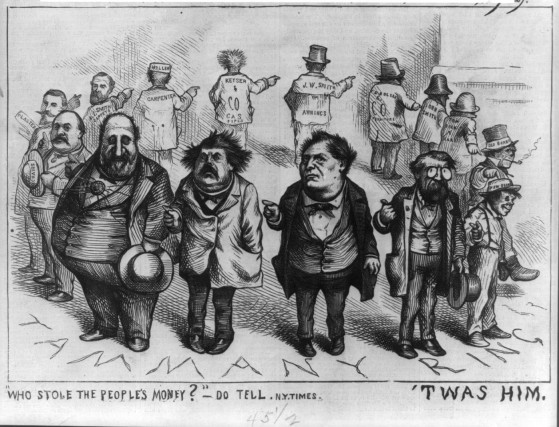 Caption: “Who stole the people’s money? Do tell. ‘TWAS HIM!”

Although perhaps this Nast cartoon would be more appropriate, for the general situation, at least: