Apparently Obama’s idea of a Holy Week sacrifice is to feed American citizens to rapacious bankers, this time through the device of “public/private partnerships” to support infrastructure spending. Some NC readers were correctly alarmed by a speech by Obama on Friday on using public/private partnerships to fund infrastructure spending. This is not a new idea; Obama first unveiled it in his Statue of the Union address. But it is a singularly bad idea, that is, if you are anyone other than a promoter of or investor in these deals.

As we’ve discussed at length earlier, these schemes are simply exercises in extraction. Investors in mature infrastructure deals expect 15% to 20% returns on their investment. And that also includes the payment of all the (considerable) fees and costs of putting these transactions together. The result is tantamount to selling the family china and then renting it back in order to eat. There is no way that adding unnecessary middlemen with high return expectations improves the results to the public. In fact, the evidence is overwhelmingly the reverse: investors jack up usage fees and skimp on maintenance. And their deals are full of sneaky features to guarantee their returns. For instance, Truthout noted:

Infrastructure privatization contracts are full of “gotcha” terms that require state or local governments to pay the private contractors. For example, now when Chicago does street repairs or closes streets for a festival, it must pay the private parking meter contractor for lost meter fares. Those payments put the contractors in a much better position than the government. It gets payments, even though Chicago did not get fares when it had to close streets…..

Highway privatization contracts also often include terms that forbid building “competing” roads or mass transit. Some even require making an existing “competing” road worse. For example, the contract for SR-91 in Southern California prohibited the state from repairing an adjacent public road, creating conditions that put drivers’ safety at risk. A proposed private highway around the northwest part of Denver required that local governments reduce speeds and install speed humps and barriers and narrow lanes on “competing” roads to force drivers to use the privatized road….

Virginia decided to promote carpooling to cut down on pollution, slow highway deterioration and lessen highway and urban congestion. As a result, Virginia must reimburse the private contractor for lost revenues from carpoolers, even though not all of the people in a car would otherwise have driven individually….

Now there is some hope in this depressing news. First, the Republicans may overplay their hand. They insist they won’t allow Obama to get any funding for these deals unless they get corresponding tax cuts. Second, with Obama’s poll ratings flagging, he’s looking more and more like a lame duck. Infrastructure is not one of his top priorities, and he may well wind up concentrating his dwindling chips on other issues.

Nevertheless, some “pragmatists,” otherwise known as the Vichy Left, may insist it’s better to have some sort of infrastructure deal, even if it means enriching financiers, than none. That’s spurious. A new post at VoxEU addresses the issue of infrastructure spending in the European context, where austerity is the order of the day, which means a lack of funding for important needs. The authors considered and rejected the idea of having private investors fill the gap. They instead argued for smarter investing, focusing more on investing to improve the productivity of existing infrastructure than costly new projects (which are often construction boondogles).

By Nicklas Garemo of McKinsey and Jan Mischke of McKinsey Global Institute. Cross posted from VoxEU

Europe’s infrastructure programme was the big loser from February’s EU budget deal. Planned infrastructure investment of €50 billion over seven years was reduced to just €24 billion. Among the programmes that now look in doubt is the Connecting Europe Facility, which included financial support for the development of cross-European transport, cleaner energy supply, and fast broadband connections, and was designed to catalyse private investment in all three, too.

It is understandable that infrastructure has fallen victim to the age of austerity (see Besley and Van Reenen 2013). After all, western European economies regularly rank high on the World Economic Forum’s infrastructure listings (World Economic Report 2013). In the 2012 ranking, Hong Kong and Singapore took the two top slots but were followed by Germany, France, Switzerland, the UK, and the Netherlands; 15 of the EU27 rank in the top 30.

Nevertheless, cuts to infrastructure programmes risks constraining the continent’s growth (see OECD 2012). The amount Europe invests in infrastructure needs to rise, not fall, to support growth. Between 1992 and 2010, the EU invested 2.6% of GDP on average. But our research finds that it will need to spend 3.1% in the period to 2030 just to support expected growth (McKinsey Global Institute 2013). In the eastern European new EU member states, infrastructure investment of 4.3% of GDP will be necessary.

In money terms, the Europe-wide investment need is €8 trillion (in 2010 prices) or €450 billion every year. That’s €70 billion more than if Europe were to continue spending at the average rate of the past 18 years. Investing sufficient amounts to meet Europe’s ambitious energy efficiency targets, and to maintain current infrastructure capacity and future-proof it to climate change would require significantly more investment.

Even before February’s budget decisions cut planned EU-level spending, at the national level countries have been scaling back their spending on infrastructure. Germany, for instance, was investing more than 3% of its GDP in infrastructure in the early 1990s but invested less than 2% in 2010. The story is similar in France: 3% of GDP in the early 1990s to 2.2% of GDP in 2010.

Given pressure on European budgets – something likely to continue for at least the next several years – could private investment fill the gap left by the public sector? The answer to this question is that private investment from pension funds, insurance companies, and sovereign-wealth funds can make a useful contribution, but this is no panacea. Even if such investors reached their global-target allocations, this would only result in an additional $2.5 trillion of investment through 2030 of the $57 trillion or more needed globally during this period.

But there is a way to meet Europe’s infrastructure challenge even at a time of constraint – boosting the efficiency or productivity of how Europe plans, delivers, and operates infrastructure. Productivity in the construction sector has stagnated or even fallen in most European economies over recent decades.

Our research, based on 400 success-case studies around the world, suggests that Europe could boost its infrastructure productivity by 60%, saving €180 billion a year, in three ways – none of which are rocket science and all of which are being applied successfully somewhere in the world. Globally, the potential saving is $1 trillion a year. 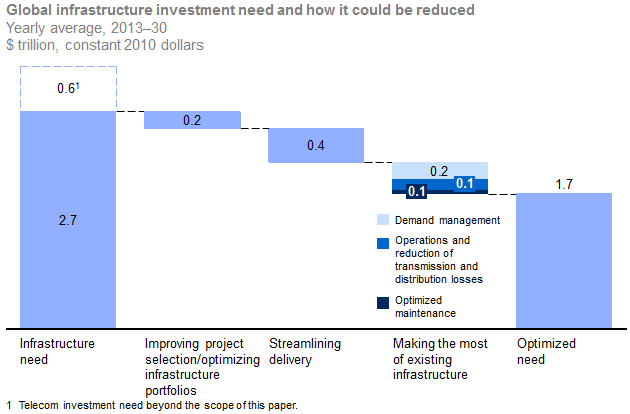 The first of the three is to make better decisions about the projects chosen. Globally, this could save 8% of necessary investment. Despite the fact that many governments face increasing constraints on their resources, they still continue to allocate them badly in the case of infrastructure. Spain has arguably over-invested in solar power. Many citizens consider France’s motorways to be under-used. Germany has endured a number of scandals related to major infrastructure projects. Owners need to use precise selection criteria that ensure proposed projects meet specific goals; develop evaluation methods to determine costs and benefits; and prioritise projects in a systemic way.

A number of governments have initiated important improvements. South Korea’s Public and Private Infrastructure Investment Management Center (PIMAC) has saved 35% on the infrastructure budget by rejecting 46% of projects that it reviews compared with the 3% that were rejected before its establishment. The UK set up a cost review programme that identified 40 major projects for prioritisation, reformed overall planning processes, and then created a Cabinet sub-committee to oversee and ensure quicker delivery of projects. These measures reduced spending by as much as 15%.

The second approach is streamlining the delivery of infrastructure projects, potentially saving up to 15% of the investment. The time it takes to obtain approvals and acquire land is a major reason for cost and time over-runs. Structuring contracts to encourage cost savings; encouraging contractors to use advanced construction techniques including prefabrication and modularisation and lean manufacturing methods adapted for construction; strengthening the management of contractors; and upgrading the way construction works. Smart planning can transform delivery. One Scandinavian road authority reduced overall spending by 15% by changing standards of road design, using lean construction techniques, and using bundled and international sourcing.

Making the Most of Existing Infrastructure

The third area is making the most of the infrastructure already on the ground. Too often governments rush to build new infrastructure instead of using what they have more effectively, including managing demand. ‘Intelligent’ transportation systems, which squeeze more capacity out of existing roads and rail lines, can at least double asset utilisation, typically at a fraction of the cost of adding the equivalent in physical capacity. Demand management through congestion pricing – as London has done – has already proven itself to be effective and new traffic-monitoring technology is enabling even more effective and tailored approaches. In London, this approach has cut congestion by around 30%. The city has also improved the speed of buses at peak-hour traffic periods by up to 20%. The UK’s implementation of an intelligent transport system that directs and controls the flow of traffic on the M42 motorway has reduced journey times by 25%, accidents by 50%, pollution by 10%, and fuel consumption by 4%.

To bring these opportunities to life will require an overhaul of infrastructure governance – a root cause of its poor productivity. Government departments responsible for water, land, or transport need to work closely together. Politicians need to set the strategic direction of investment in infrastructure; but experts, preferably independent ones, need to put this strategy into practice. Governments need to make sure stakeholders genuinely participate early on. In Stockholm, for instance, congestion charging was launched as a test first, then briefly revoked the programme to show the effects, and had citizens vote on its introduction.

Until sound infrastructure governance systems are in place, countries will continue to fund the wrong projects, place priorities in the wrong areas, and fail to meet the needs of their people.