By Tatiana Didier, Research Economist, Office of the Chief Economist for Latin America and the Caribbean, World Bank, and Sergio Schmukler, Lead Economist at the World Bank. Originally published at VoxEU.

The growth of China and India’s financial sectors is hard to ignore. This column presents a new dataset on domestic and international capital raising activity and performance of the publicly listed firms in China and India. The data suggest that expanding capital markets might tend to directly benefit the largest firms – those able to reach some minimum threshold size for issuance. More widespread direct and indirect effects are more difficult to elucidate.

China and India are hard to ignore. Over the past 20 years they have risen as global economic powers, at a very fast pace. By 2012, China has become the second-largest world economy (based on nominal GDP) and India the tenth. Together, they account for about 36% of world population.
Their financial systems have also developed rapidly and have become much deeper according to several broad-based standard measures, although they still lag behind in many respects. For example, stock-market capitalisation increased from 4% and 22% of GDP in 1992 to 80% and 95% of GDP in 2010 in China and India respectively. By 2010, 2,063 and 4,987 firms were listed in China’s and India’s stock markets. Their financial systems have not only expanded, but also transitioned from a mostly bank-based model to one where capital markets have gained importance. Equity and bond markets in China (India) have expanded from an average of 11% and 57% of the financial system in 1990-1994 to an average of 53% and 65% in 2005-2010 in China and India (see Eichengreen and Luengnaruemitchai 2006, Neftci and Menager-Xu 2007, Chan et al. 2007, Shah et al. 2008, and Patnaik and Shah 2011).

But how much has this overall expansion in capital markets implied a more widespread use of those markets? Has it allowed different types of firms to obtain financing, invest, and grow? Do the cases of China and India show that the policies to promote capital-market development might be conducive to growth? If so, how inclusive is this growth? Is it associated with some convergence in firm size, with smaller firms benefitting the most? Or are China and India cases of growth without finance?

To study these questions, we assemble a unique and comprehensive data set on domestic and international capital raising activity and performance of the publicly listed firms in China and India (Didier and Schmukler 2013). In particular, we match transaction-level information on equity and bond issues with annual firm-level balance sheet information. Our matched data cover 2,458 firms in China and 4,305 in from India between 2003 and 2011.

This new dataset allows us to document important stylised facts:

Although capital raising activity in equity and bond markets expanded substantially in 2005-2010, it remained small as a percentage of GDP.

This contrasts with the perception in the literature that equity markets in these countries, and particularly in India, are relatively well-developed.

While non-issuing firms in both China and India grew at about the same rate as the overall economy, issuing firms grew twice as fast in 2004-2011.

Firms grow faster the year before and the year in which they raise capital. 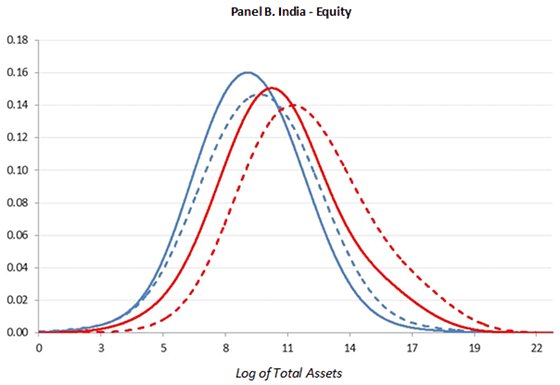 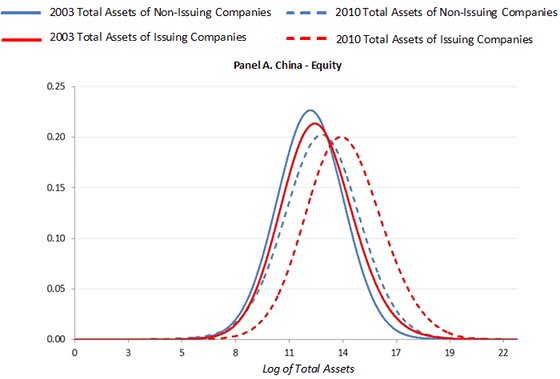 Note: The panels of this figure show the estimated Kemel distributions of the log of total assets (in2011 US dollars) for issuing and non-issuing firms in 2003 and 2010. User firms are those that raise capital through equity between 2004 and 2010, and non-users are the other firms in our sample. All firms with capital-raising activity in 2003 are excluded from the sample in this figure. Only firms with data on total assets in both 2003 and 2010 are included in this figure.

Contribution of the results

These results are relevant to many discussions in economics:

Most of this finance and growth literature focuses on the size of the financial systems by analysing aggregate measures. Our results suggest that, to the extent that capital-market financing spurs growth, it does it through few firms and through an expansion of their investments. These results also show the mechanics that connect finance and the corporate sector.

China is the most cited counter-example to this literature because it is one of the fastest growing economies in the world and it is not clear which sources of financing propel the fast growth of its private sector. Our findings provide evidence on the positive association between the use of capital markets and firm performance.

This view has been challenged over time. Although the growth of large firms seems independent of their size, including smaller firms in the analysis typically introduces a negative relation between growth and firm size. Moreover, the distribution of young firms is skewed to the right (most of the mass is on small firms) and the skewness tends to diminish monotonically as firms age and become larger (Cabral and Mata 2003, Angelini and Generale 2008).

Our findings suggest that even among the publicly listed firms, which consist of the largest firms, there is some heterogeneity: firms that use capital market financing are larger to begin with and grow faster than non-users. In fact, our results indicate that there is no convergence in firm size. Moreover, a misallocation of capital in China and India (Hsieh and Klenow 2009) might have kept large, highly productive firms artificially small, which might explain why they are the ones that grow the most when financing becomes available.

The findings suggest that finance matters, but in more nuanced ways than previously thought. Even though the financial markets in China and India are not yet fully developed, the firms that are able to raise capital do seem to benefit from it, particularly in their overall expansion. In other words, at least part of the high growth in these countries seems to come from the firms that are able to raise new funds from the markets.

Moreover, the findings suggest that even the large, publicly listed firms (that arguably have access to formal markets) appear to be partly financially constrained. The results of differentiated performance between users and nonusers of capital market financing suggest that firms that issue securities are sensitive to the external capital raised. That firms perform differently and expand when they raise capital also suggests that they had investment opportunities ex ante that they could not realize. While we show that capital raising activity is related to changes in firm dynamics, we do not analyse to what extent the effects are driven by the supply side (the capital market side) or the demand side (the firm side). Doing so requires further research.

In recent decades, many emerging economies have undertaken large efforts to increase the scope and depth of their capital markets and to liberalise their financial sectors as a way to complete and increase the provision of financial services. But expanding capital markets might tend to directly benefit the largest firms – those able to reach some minimum threshold size for issuance. More widespread direct and indirect effects are more difficult to elucidate.

For the broader set of emerging economies, these findings suggest that even in fast-growing China and India with plenty of growth opportunities, receiving large inflows of foreign capital, and with thousands of firms listed in the stock market, only a few firms have directly absorbed the capital market activity. This could suggest that it might be difficult for a broad set of corporations from smaller and slower-growing countries to benefit from capital-market development.