Yves here. I’ve sympathetic with the aspirations expressed in Boyce’s piece, but if anything, the measurement fetish is going in the other direction. Both businessmen and economists are obsessed with quantification, which leads to thing that are readily measurable, like transaction data, being assigned more significance than qualitative or hard to gather information. It also leads to data which is developed and derived (think GDP) being treated as being as “solid” because it is expressed as as a single figure, as a data point that is precise, such as the closing price of XYZ Widget’s stock on a particular day (see longer form discussion here).

Boyce also discusses other distortions in measures of growth that don’t get sufficient attention, such as the rising prices of positional goods. And rising income disparity makes societies less happy and less healthy, yet it’s become a cause for concern in the economic literature mainly because it is seen as a probably culprit in flagging growth rates.

By James Boyce, professor of economics at the University of Massachusetts, Amherst, and co-founder of Econ4: Economics for People, the Planet, and the Future. His most recent book is Economics, the Environment and Our Common Wealth. Cross posted from Triple Crisis.

Average national income is a notoriously imperfect measure of the average person’s well-being. The 2010 BP oil spill in the Gulf of Mexico – with clean-up and damage costs of $90 billion – added about $300 to the average American’s “income.” But it added nothing to our well-being. The world’s most expensive prison system, costing almost $40 billion per year, adds another $125 per person. This doesn’t make us better-off than people living in countries that don’t incarcerate one in every 100 adults.

Of course, national income includes many good things, too. Growing food and building homes add to national income. So does public spending on education and health care. Unlike oil spills and jails, these really do add to our well-being.

National Income: The Good, the Bad, and the Useless 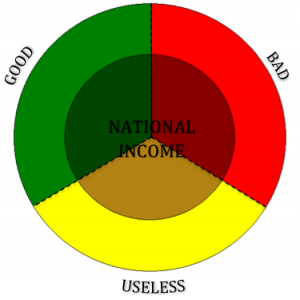 Along with good stuff and bad stuff, national income includes a third category of stuff that’s just useless – goods and services that neither add to our well-being nor subtract from it, but still get counted in the income pie. A prime example is what the economist Thorstein Veblen called “conspicuous consumption” – items consumed not for their intrinsic worth, but simply to impress other people and jockey for a higher rung on society’s pecking order. These goods and services have zero net effect on national well-being, since for every person who climbs a rung, someone else slips one.

Of course, not all bad or useless things are counted as national income. But neither are all good things. Unpaid work caring for children, the elderly and the disabled doesn’t count. Clean air, clean water and climate stability don’t count. Open-source information and culture don’t count.

The national income pie is an odd subset of the good, the bad, and the useless. All three slices get lumped together when economists tell us that average income in the United States today is roughly $42,000 per person.

Researchers in the emerging field of happiness studies have devised other ways to measure well-being. They find that beyond the level of income that is needed to satisfy basic wants, such as food and shelter, there is little or no correlation between a country’s average income and the happiness of average person. Past some threshold, increases in the good and bad appear to cancel each other out, and the useless slice of the income pie can get pretty fat.

Forty years ago, a report called The Limits to Growth drew attention to the indisputable fact that our planet does not have an infinite capacity to serve as a source for raw materials and a sink for waste disposal. In choosing to call this idea the “limits to growth,” the authors fell into a rhetorical trap that has haunted environmentalism ever since.

Because they’re really talking about different things, proponents and opponents of growth often talk right past each other. And when they assume that the good and bad are inseparable, both sides buy into the myth that there is an inexorable tradeoff between economic well-being and environmental quality. If the good and the bad must go together, they must grow together.

To find a way out of this impasse, we need better measures of economic well-being, better public policies, and better language.

A growing number of economists recognize the need to develop new measures of well-being that count the good as positive, subtract the bad as negative, and ignore the useless. In 2009, the international Commission on the Measurement of Economic Performance and Social Progress, chaired by Joseph Stiglitz, Amartya Sen and Jean-Paul Fitoussi, produced a powerful and wide-ranging critique of the conventional measure of national income. In the U.S., dozens of state-level initiatives are now experimenting with different ways to measure well-being.

In the policy arena, we need to both advance human well-being and protect the environment on which it ultimately rests. This requires not only sound regulations, but also true-cost prices to orient investment and consumption decisions to the full range of costs and benefits. In climate policy, for example, although regulations such as those recently announced by President Obama can help promote the clean energy transition, in the absence of a price on carbon emissions there will always be strong incentives to burn cheap fossil fuels.

Last but not least, we need better language. We need to move beyond the stale “pro-growth” versus “anti-growth” rhetoric of the past. It’s time to raise a new banner: Grow the good and shrink the bad.