Yves here. While most investors and analysts were busy fixating on the Fed’s taper and the unemployment report and the Abenomics roller coaster, some important housing market news slipped under the radar. A Bloomberg report pointed to a panic among prospective home buyers (the ordinary person kind, as opposed to the investor/flipper/private equity landlord type) about being shut out of the market by rising rates. The Oregon Supreme Court whacked MERS (hat tip April Charney).

In addition, a bankruptcy court in Texas in In Re Saldivar accepted the logic of what we’ve called the New York trust theory in assessing standing in a foreclosure. Some defendants whose mortgages wound up in trusts governed by New York law (and the overwhelming majority elected New York law) have tried arguing that the trust did not have standing to foreclose since the borrower note had to get to the trust by a stipulated cut-off date, and that didn’t occur (and New York law is very unforgiving in terms of requiring that a trust act only as precisely stipulated; any acts not consistent with the governing instrument is a void act). While the decision is helpful, one otherwise good write up of the case speculated that it might be “REMIC Armageddon” and forecast all sorts of tax law issues arising. Sorry, sports fans, but tax law is a different beast than trust law. The REMIC issue was raised with the IRS first in 2010 and a few times since then, an the answer is crystal clear: the IRS doesn’t see any problem. So while this decision is a win for borrowers, it won’t nuke the mortgage industrial complex.

By rjs, who is unencumbered by education and affiliations. Cross posted from MarketWatch666 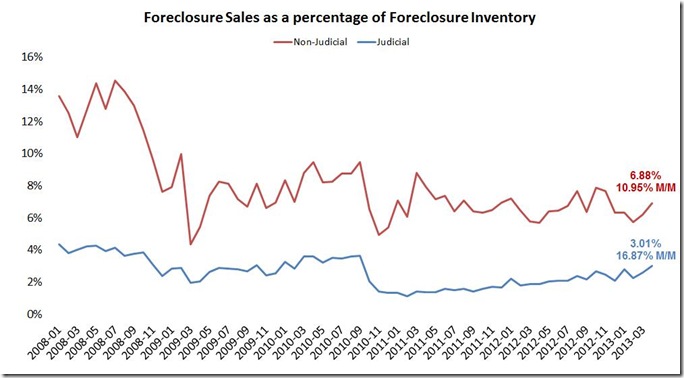 While everyone was focused on the unemployment report, most missed another important report released this past week, the Mortgage Monitor for April (pdf) from Lender Processing Services (LPS). We’ve been following it as a proxy for the ongoing mortgage crisis.

Part of this reduction in delinquencies is seasonal. As we’ve seen, significant numbers of homeowners forego mortgage payments before Christmas, and typically catch up by March or April.

LPS also noted the highest rate of completed foreclosures in judicial states since 2010, which reduced the foreclosure inventory by 5.83%; nonetheless, homes in foreclosure are remaining delinquent in those states that require judicial review an average of nearly three years before the "foreclosure sale" is completed (you’ll recall foreclosure sales is a mortgage industry euphemism for home seizures, after which the home usually becomes part of the banks REO, or real estate owned – the glossary of terms used is on page 23 of the pdf)

Data from the table below, taken from page 20 of the LPS pdf, best illustrates where we’ve been and how far we have yet to go. Each line first shows the month and the total active count, or the total number of active mortgages nationwide in that month; subsequent columns show the actual number of delinquent mortgages that are 30, 60, more than 90 days delinquent, or in foreclosure (FC), with a sum of the non current in the next column (. The big jump in short term delinquencies in September last year was due to the release of the iphone5)…then there’s also a separate column for foreclosure starts in each month. But it’s the last two columns that tell the story, as they give the accumulating days that an average home mortgage has remained either delinquent or in foreclosure without proceeding to the next step.

You can see that as of April, the average seriously delinquent homeowner has not paid on their mortgage for 503 days, and that the typical home in foreclosure has been delinquent for 843 days; in general, those who are seriously delinquent (more than 90 days past due) are not being foreclosed on, and those who are in the foreclosure process are not having their homes seized. Since this metric seems to be increasing an average of ten days a month, and new foreclosure starts are being added each month which should be bringing the average days down, we can only conclude that the foreclosure process is damn near frozen…and as we’ll see in the next graphic, this isn’t just because the courts are clogged… 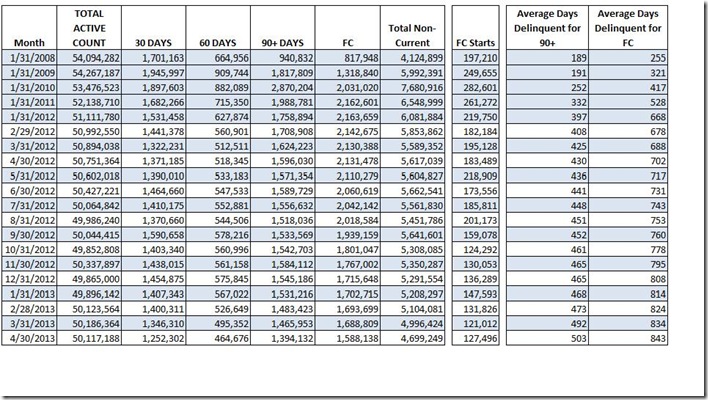 Below to the left we have a set of bar graphs from page 13 of the LPS pdf; as the heading reads,. They show the average months delinquent for various stages of foreclosure. Again, blue represents the times for judicial states, and red for non-judicial states. The top number over each bar represents the number of months a loan has been delinquent in that stage as of April; in the small print below that are the months delinquent for each stage and type as of January 2010, the peak of the crisis. 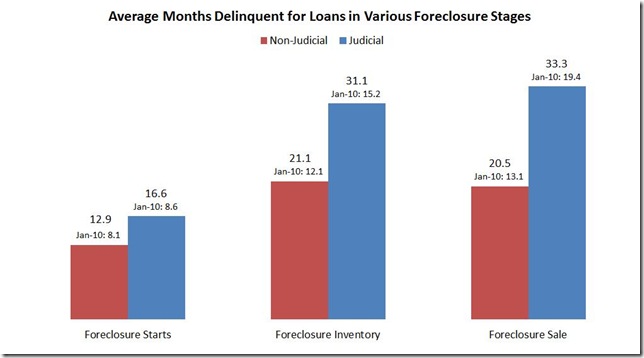 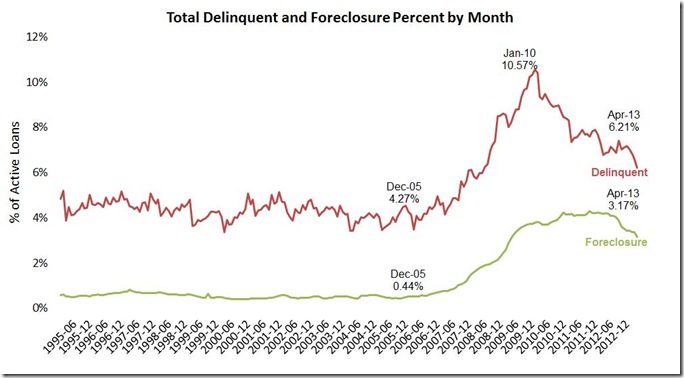 Lastly, the graph on the right above summarizes the delinquency and foreclosure history of US mortgages going back to 1995, showing both as a percentage of the active loan counts; there’s a callout for December 2005. .44% in foreclosure and 4.27% delinquent would represent a normal level of mortgages in trouble.

You see delinquencies, tracked in red, peaked at 10.57% in January 2010, and have now fallen to 6.27%; the seasonal pattern for delinquencies is also evident…and the foreclosure inventory in green is now down to 3.17%. Most of the Mortgage Monitor is graphics like these above with little detail; the data summary for the past 12 months is on page 18 of the pdf: if you are so inclined, you can also watch LPS Applied Analytics Senior Vice President Herb Blecher explain some of the graphics in a video presentation…