Yves here. I guarantee this post will make some readers’ heads explode. It also explains why Germany would benefit from OMT.

The monetary-fiscal policy connection is under scrutiny by the German Constitutional Court in the context of the ECB’s OMT bond-buying programme. This column argues that most analyses are deeply flawed by the misapplication of private-company default principles to the central bank. ECB bond-buying transforms public bonds into monetary base, and sovereign-default risk into inflation risk. The real question is: What is the non-inflationary limit to money-base expansion? This depends upon the economic situation and is much higher in the current liquidity-trap setting.

There is a lot of confusion about the fiscal implications of the government bond-buying programme – the OMT, or Outright Monetary Transactions – that the ECB announced last year.

This confusion arises mainly because the principles that guide the solvency of private companies (including banks) are applied to central banks.

• The level of confusion is so high that the president of the Bundesbank turned to the German Constitutional Court arguing that the OMT programme of the ECB would make German citizens liable for paying taxes to cover potential losses made by the ECB.
• In this column we argue that the fears that German taxpayers may have to cover losses made by the ECB are misplaced. They are based on a misunderstanding of solvency issues that central banks face.

Indeed, German taxpayers are the main beneficiaries of such a bond-buying programme.

Private companies are said to be solvent when their equity is positive, i.e. when the value of their assets exceeds the value of their outstanding debt. The solvency of a private company can also be formulated in terms of the maximum amount of losses that a company can bear at any given time. Thus, a private company is said to be solvent when its losses do not exceed the value of its equity. Since in efficient markets the latter is equal to the present value of future profits, we arrive at the solvency constraint that says that the losses today cannot exceed the present value of expected future profits.

The problem arises when these solvency constraints are applied to central banks.

• This misapplication of private principles has led some to conclude that the loss the ECB (or any central bank) can bear should not exceed the present value of future expected seigniorage gains (see Corsetti and Delado 2013).
• Similarly, it is sometimes concluded that a central bank needs positive equity to remain solvent (Stella, 1997, Bindseil et al. 2004).

These solvency constraints should not be applied to the central bank; central banks cannot default.

A central bank can issue any amount of money that will allow it to ‘repay its creditors’, i.e. the money holders.1 Such a ‘repayment’ would just amount in converting old money into new money.

Seigniorage is not a Limit

With that power granted by the sovereign the central bank is freed from any solvency constraint.

The Central Bank of a Stand-Alone Country

When the central bank buys its government’s debt, the debt is transformed:

• Government debt that carries an interest rate and a default risk becomes debt that is a monetary liability of the central bank (money base) that is default-free but subject to inflation-risk.

To understand the fiscal implications of this transformation, it is important to consolidate the central bank and the government (after all they are separate branches of the public sector).

Public Debt Held by the Public Sector is Different

We arrive at an important conclusion:

• When the central bank has acquired government bonds, a decline in the market value of these bonds has no fiscal implications.

This bookkeeping practice has led to the perception that the interest revenue is to be considered as seignorage. It is not. There is no profit for the public sector. The profit of the central bank is exactly offset by a loss of the government. Both could do away with this bookkeeping convention because there is no economic substance to these losses and profits.

• It is literally true that the central bank could put the government bonds ‘into the shredding machine’; nothing would be lost.

What happens if the government defaults on its outstanding bonds?

• Default leads to losses for private holders of these bonds.
• But it is immaterial for central bank-held bonds.

These are now valued at zero, but they were also already worthless before the default. This is the right hand taking it back from the left hand.

Think about it in terms of the interest flows. After the default, the central bank stops receiving interest payments from the government, but by the same token it stops paying these back to the government. Nothing has happened in the public sector. Thus the loss that the central bank is making as a result of the default has no fiscal implications.

There is an issue when it comes to price stability and its link to a government default. If the central bank keeps its liabilities (money base) under control, the default by itself will not lead to more inflation. The latter will arise only if the government were to force the central bank to issue more of these monetary liabilities, e.g. to finance current budget deficits that after the default the government cannot finance by issuing bonds anymore.

• First, the central bank can issue interest-bearing bonds and sell them in the market.

This has the effect of reducing liquidity (money base).

As a result, the existing stock of liquidity is ‘deactivated’, which has the same effect of a decline in the money base.

The Central Bank of a Monetary Union

Things are more complicated in a monetary union that is not also a fiscal union. Here the fiscal implication of central-bank bond buying is more complicated. The crux is the presences of ‘n’ sovereigns. In the Eurozone, n = 17 (soon to be 18 with Latvia).

• If we could consolidate the ECB and the 17 sovereigns into one public sector, the analysis would carry through unchanged.
• But we cannot; the Eurozone is not a fiscal union.

As a result a bond-buying programme will lead to transfers among participating member countries.

To clarify thinking about this problem, assume that the ECB buys €1 billion of Spanish bonds with a 4% coupon. The fiscal implications are now as follows.

The distribution is pro rata with national equity shares in the ECB (see ECB 2012).

• The national central banks transfer this to their national treasuries.

For example, the ECB will transfer back 11.9% of the €40 million to the Banco de España. The rest goes to the other member central banks. The largest receiver is the German Bundesbank; with its equity share of 27.1%, it would get €10.8 million.

Thus in a monetary union (and in the absence of a fiscal union) a bond-buying programme leads to fiscal transfers among countries – but not the one common in the public perception, especially in Germany.

• An ECB bond-buying programme leads to a yearly transfer from the country whose bonds are bought to the countries whose bond are not bought.

What Happens Under a Public-Sector Default?

One often hears in the creditor countries that these would be the losers if one of the governments whose bonds are on the balance sheet of the ECB were to default. This is an erroneous conclusion.

Returning to our example of an ECB purchase of €1 billion of Spanish government bonds, consider a Spanish defaults on these bonds.

• The Spanish government would stop paying €40 million to the ECB.
• The ECB would stop transferring this interest revenue back to the member central banks pro rata.
• The German taxpayer, for example, would no longer receive the yearly windfall of €10.8 million.

In no way can one conclude that German taxpayers, or any EZ taxpayer, would pay the bill of the Spanish default – except in the narrow sense that they would no longer be able to count on the yearly interest revenues.

• There is of course the possibility of an inflation tax.

We have noted before that at the moment of the bond buying programme interest bearing debt is transformed into monetary liabilities of the ECB (money base). This by itself could lead to inflation, and thus to an inflation tax that would be borne by all holders of euros. This leads to the issue of how large the ECB bond-buying programme can be without generating additional inflation.

From Explicit Taxation to Inflation Tax

In Figure 1 we show the evolution of money base and money stock (M3) in the Eurozone since 2004. We find a striking difference between the period before and after the banking crisis of October 2008.

• Prior to the Global Crisis, the two monetary aggregates move in unison suggesting that the money multiplier (the ratio of money stock to money base) is constant. 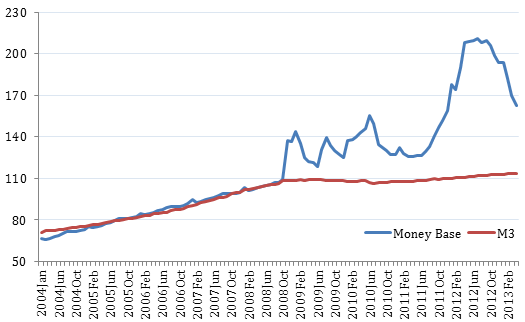 This dramatic decline in the money multiplier has everything to do with the liquidity trap (Krugman 2010). Banks, which accumulate reserves as a result of the liquidity injections by the ECB, hoard these reserves. Their degree of risk aversion is such that they do not use their cash reserves to expand bank credit. As a result, the money stock (M3) does not increase.

The money base grows at a yearly rate of 11% while the growth rate of the money stock collapses to less that 2% and inflation drops below 2%.

• Our interpretation is that the strong increase in the money base helped to reduce the deflationary forces in the economy, rather than being a source of inflation.3

The previous analysis suggests the following:

If the target for the increase in the money stock is 4.5% (as is the case in the Eurozone where a 4.5% target is assumed to lead to at most 2% inflation) this also means that the money base should not increase by more than 4.5% per year. But then during normal times there is very little need for a bond-buying programme.

• The situation has changed dramatically since the start of the banking crisis.

During the crisis period the limits to the amount of money base that can be created without triggering inflationary pressures is much higher because of the existence of a liquidity trap.

How much higher depends on the money multiplier. In De Grauwe and Ji (2013) we estimate the size of the multiplier during the crisis period and we conclude that it has collapsed to zero. As a result, there is no limit to the size of the bond-buying programme, i.e. the ECB can buy any amount of government bonds without endangering price stability, as long as the crisis lasts.
______

2 Thus we do not discuss direct monetary financing of government budget deficits.

3 See Friedman and Schwartz(1961) for an analyis of the Great Depression in the US. These authors argued that the US Fed at the time failed to increase the money base sufficiently to counter the delflationary forces. As a result, the US money stock actually declined, reinforcing deflation.