Update by Yves, 6:15 AM. Yanis isn’t exaggerating about the domestic impact. See details in the Guardian, Attempt to shut ERT rocks Greece.

By Yanis Varoufakis, an economics professor at the University of Athens. Cross posted from his blog

For those of us who grew up in the Greece of the neo-fascist colonels, nothing can stir up painful memories like a modern act of totalitarianism. When the television screen froze last night, an hour before midnight, as if some sinister power from beyond had pressed a hideous pause button, I was suddenly transported to the 60s and early 70s when a disruption in television or radio output was a sure sign that another coup d’ etat was in the offing. The only difference was that last night the screen just froze; with journalists still appearing tantalisingly close to finishing their sentence. At least the colonels had the good sense of pasting a picture of the Greek flag, accompanied by military tunes…

After the state channels froze on our screens, I turned to the commercial ones assuming that this major piece of news would be recorded and commented upon by them. Not a word. Soaps, second rate movies and informationals. That was all we got. As if ERT’s, the public radio and television service’s, instant demise was not worth a mention by their commercial competitors. Soon after the phone rang. It was a journalist friend. Her message to me: “Come to ERT now. Thousands are gathering. It will be a long night.” And so I did.

Indeed, thousands had gathered. The dual carriageway in front of the building was closed to traffic as the crowds gathered in front of ERT’s building. Inside the building all the staff were there, despite a police order to vacate the facility. All studios were running, all systems were go. Only, of course, the signal was not reaching the outside world, cut off by technicians working for other parts of government. Still, ERT’s people managed to upload a tv signal onto a disused analogue transmitter and at least some Athenians had output. In that context, they ushered me into the studio, where I was interviewed by anchors in full make up, as if nothing had changed.

My words to them were:

I feel I have the moral authority to be here in support of your cause; to castigate ERT’s barbaric closure. I say this because, as you know, your government bosses had me blacklisted from this station ever since I refused to keep quiet about Greece’s bankruptcy. That act of totalitarianism was a prelude to the much grosser one that we are experiencing tonight. Clearly, I am not the person to say that ERT was a splendid organization unblemished by censorship, political interference or corruption. But I think I am the person possessing the moral authority to stand here tonight in front of you and say that, despite all its ills, the totalitarian manner in which ERT was closed down was a crime against all civilised people the world over. Think about it: Mr Rupert Murdoch, and people of his ilk, will be ecstatic tonight. Who is to say that ERT’s dismantling cannot be the blueprint that will lead to the privatisation of the BBC, of the ABC in Australia, of CBC in Canada etc. etc.? 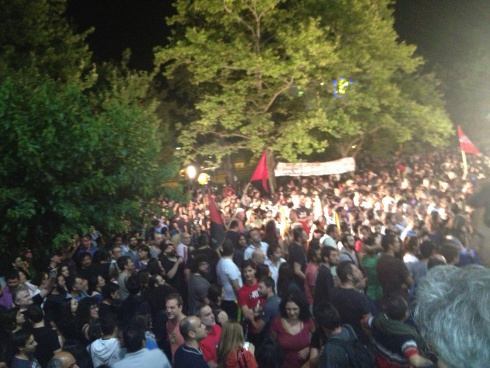 Then, I stepped outside the studio to a cacophonous web of corridors and then outside the building itself. To find thousands of people gathered, joining in ERT’s excellent musicians in an impromptu heart-warming concert – see photo. When I left a couple of hours later, just before 5am, more people were arriving. Is this our Taksim Square? Only time will tell. So far the only certainty is that Greece took another step down the stairway to hell.