Yves here. Note that FT Alphaville’s reading of the same data is a smidge more positive.

A few interesting development this week in the Eurozone. Firstly the good news…

The latest sentiment surveys have followed the latest PMIs in a new uptrend showing strength across most sectors, excluding construction. 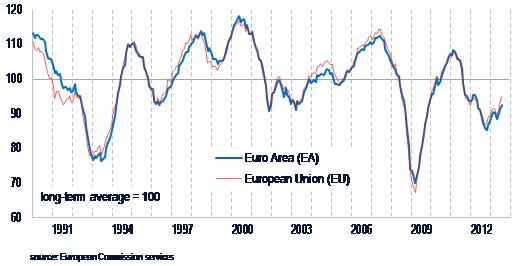 In the euro area, the ESI’s increase was driven by improved confidence among consumers and managers in industry, services and retail trade. Only in the construction sector confidence weakened. Economic sentiment improved in four out of the five largest euro area economies, i.e. Italy (+2.9), Spain (+1.2), France (+1.2) and Germany (+0.7), while it deteriorated in the Netherlands (-2.0).

The assessment of the current level of export order books remained stable. Services confidence saw the sharpest increase of all sectors covered (+1.8), driven by improved assessments of the past business situation and past demand, while demand expectations remained virtually unchanged. Consumer confidence improved markedly (+1.4) and for the eighth successive month. This was mainly due to further easing unemployment expectations and better savings expectations over the next 12 months.

Consumers’ views on the future financial situation of their households and the future general economic situation also brightened somewhat. Retail trade confidence increased (+0.9), driven by an improved assessment of the present business situation and business expectations, while views on the volume of stocks remained virtually unchanged. The construction sector stands out with lower confidence (‑1.0), resulting from managers’ markedly worsened assessment of order books, which failed to be counterbalanced by the more cautious upward revision of employment expectations. Financial services confidence (not included in the ESI) increased by 3.1 points. While the past business situation and past demand were assessed much more positively, demand expectations deteriorated.

We also has some good news from Spain with the GDP data looking at bottoming with a small -0.1% fall in Q/Q. As the media release states:

The GDP annual variation in the second quarter 2013 was –1.7%, as compared to the –2.0% registered in the first quarter. This result was basically caused by a more negative contribution in the domestic demand, which was compensated partially by a positive contribution of the external demand

Greece also managed to secure and addition bailout tranche after it’s latest Troika review. If you could be bothered you can read the 223 pages of ”The Second Economic Adjustment Programme for Greece Third Review – July 2013″ yourself here, or just take the official executive summary below:

Greece continues to make overall, albeit often slow, progress under the Second Economic Adjustment Programme, with several important actions being delayed. Important progress has been made on public finances and the recapitalisation of the four core banks has been completed.

The macroeconomic outlook is broadly unchanged from the previous review and recent fiscal developments have been broadly on track. However, the mission initially identified new shortfalls, notably in the health sector, that threatened the achievement of the fiscal targets for the primary balance in 2013 and 2014. The renewed fiscal gap reflects expenditure overruns in the main health care fund, delays in the issuance of property tax bills, lower social security contributions, and the non-implementation of some of the previously agreed measures for 2014. Following discussions, however, the authorities identified appropriate measures for adoption in the course of July 2013 in order to secure the primary balance targets.

Increasing public revenues and reforming an ineffective revenue administration are key priorities. Significant efforts are needed to make the recently created semi-autonomous revenue administration fully operational and improve its effectiveness. A simpler and less distortive taxation system and a new tax procedures code will facilitate these efforts. Further progress was made in monitoring and correcting public expenditure, by improving Public Financial Management (PFM), but weaknesses remain and more reforms are needed. Limited progress has also been made in selling assets through privatisation and 2013 proceeds have so far been below expectations.

As you can see, Greece has done enough to get the next tranche of €5.8bn, but structural change continues to be slow, the privatisation program is all but a complete failure at this stage, and the Troika continues to ask for further cuts to government staff and services. This all looks to me that some new form of OSI is still going to be required for Greece over the next 12-18 months.

And now for the not so good news…

As H&H posted on earlier in the week the recent ECB quarterly survey suggested that the demand and availability of credit in the Eurozone is improving. The problem is, as I’ve noted previously, and you can see if you read the original survey, the banks themselves tend to be overly optimistic about what is occurring in the real economy. If you read the latest monthly bulletin from the ECB you find quite a different story (from Page 25-26): 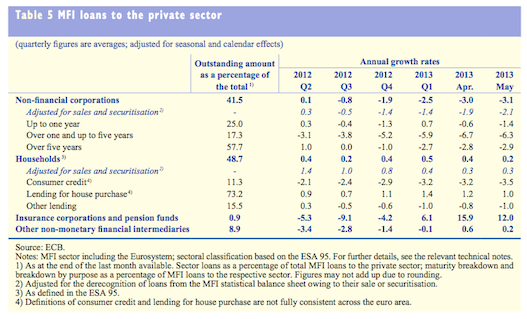 “Overall, growth in loans to the non-financial private sector remains subdued in the euro area, with both supply and demand factors weighing on the pace of loan growth. Weak economic activity and persistently high levels of economic uncertainty continue to be reflected in weak demand for bank loans. At the same time, the fragmentation of financial markets, although receding in recent months, as well as credit supply constraints are curbing credit growth. Finally, the still high level of indebtedness for both households and non-financial corporations in a number of countries is also weighing on loan growth”

This trend appears to have continued with the most recent data showing continued weakness:

Lending to companies and households in the 17-member euro area fell the most on record in June in a sign the region is still struggling to shake off its longest-ever recession.

Loans to the private sector dropped 1.6 percent from a year earlier, the Frankfurt-based European Central Bank said today. That’s the 14th monthly decline and the biggest since the start of the single currency in 1999.

“The weak economy is still weighing on demand for loans and the ECB needs to figure out how to support that,” said Annalisa Piazza, a fixed-income analyst at Newedge Group in London. “There are still substantial reasons for the ECB to maintain the current accomodative stance.”

Interestingly, in relation to the earlier Greece story, while he waits for the outcome of Mr Berlusconi’s latest court case, Italy’s PM held a joint press conference with his Greek counterpart and he had very little nice to say about the way in which the Greek crisis was handled:

Italy’s Prime Minister Enrico Letta has slammed Europe for the handling of Greece’s near-quarter of a trillion euro rescue package by saying that the bloc made some ‘serious mistakes’.

During a joint news conference with his Greek counterpart Antonis Samaras, Letta told reporters that Europe has been instrumental in prolonging the country’s sixth consecutive year of recession despite stumping up €240bn (£207bn, $314bn) in bailout cash.

“There is no doubt that serious mistakes were made about Greece by Europe in the past few years,” said Letta.

“The timing was wrong. The instruments were wrong. The interventions were not made in the right way and at the right time and this worsened the crisis.

I’m not too sure what the exact context was for these particular statements, but a quick glance at the latest debt to GDP figures from EuroStat gives you some hints as to why Mr Letta maybe making them:

Many of the Eurozone government balance-sheets continue to provide the counter-balance for the retrenching private sector. Along with Greece, Portugal and Ireland, Italy’s 100%+ debt to GDP ratio continues to worsen as the economy slows further. On top of that, as the WSJ recently covered, the banking system is quietly getting more shaky as the recession continues:

The Bank of Italy is quietly inspecting the finances of some of the country’s top lenders, which could push some Italian banks to sell assets or take other major steps, according to a central-bank document reviewed by The Wall Street Journal.

The central bank’s examinations, which were previously undisclosed, come against a backdrop of increasing worry among regulators, investors and bank executives about the health of some of the country’s lenders amid a rise in souring loans. 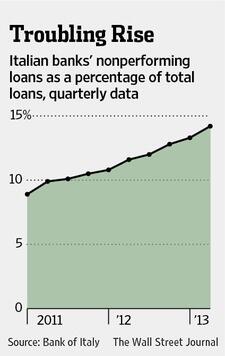 Unlike Spain before it, Italy didn’t have a housing bubble. These issues are simply a case of the banking system slowly souring as companies and individuals default on their loans due to the slowing economy. This is definitely something to keep your eye on because, as I talked about through last year, Italy is an economy that needs growth. It is therefore likely that we will continue to see the trend of economic problems in the Eurozone slowly creeping up the economic chain into ever-larger economies. Italy is obviously a prime candidate, as are France and The Netherlands.

As I’ve stated before many times, it’s not that one country, or in fact even two or three, can’t dig themselves out economic weakness via export driven internal devaluation. It’s just that in the absence of extremely large external demand they won’t ALL be able to do it. Spain appears to be having some success at re-balancing, albeit with a massive unemployment issue, but in the meantime other nations are still getting worse.

Finally, from the quagmire that is Cyprus comes news that the Troika has won the day on depositor hair-cuts:

THE CENTRAL Bank of Cyprus (CBC) has agreed a 47.5 percent haircut with international lenders on deposits exceeding €100,000 in the Bank of Cyprus in an attempt to recapitalise it.

Deputy government spokesman Victoras Papadopoulos announced the deal after protracted talks spanning the weekend and yesterday. He intimated however that the administration was not too thrilled with the outcome.

“The government considers that a smaller haircut rate would have been sufficient to secure a necessary capital adequacy for the bank,” Papadopoulos told newsmen.

Nevertheless, he added, the government welcomed the haircut decision as it paved the way for Bank of Cyprus (BoC) to finally exit administration. The official haircut figure is likely to be announced today by the Central Bank, which is also acting as the administrator for BoC.

So we are broadly still seeing the story of “core” strength against continuing periphery weakness. Good news is slowly starting to appear in some nations, but there are still major caveats to be found everywhere you look.