The poor have to endure not just the indignity of struggling to survive, but also from having to listen to pious lectures on how they really can proper on their meager incomes.

The McDonalds/Visa/”Wealth Watchers” version of this “let them eat cake” comes in the form of a website that drives home the message that if low wage workers like McDonalds employees just mustered up enough budget discipline, they can achieve “financial freedom”. The use of math, one imagines, is intended to make the advice seem objective rather than cynical and self serving. ThinkProgress, which pounced on this spreadsheet, pointed out how unattainable this sanitized, prettily-formatted elite fantasy is. 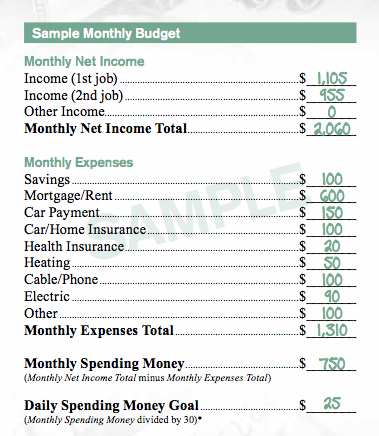 Now it’s not hard to notice that these lovely patronizers anticipate, in a super duper high unemployment economy, that the industrious budget-preparer will have TWO jobs. And how much time might that entail?

Wellie, the spreadsheet starts from after-tax dollars. Using current employee FICA payments of 6.2% and the 2012 Federal tax tables, and assuming this is a single worker who takes the personal exemption and standard deduction and pays no state income tax, this worker gets roughly $28,950 in pre-tax income. ThinkProgress tells us that McDonalds pay “averages” $8.25. I’m not sure where they got that, since other reports (Glassdoor) show McDonalds’ jobs postings paying well under $8, and a Bloomberg story recounted how a 20 veteran was still getting only minimum wage in Chicago…which is $8.25. So we’ll used $8.25 even though this looks like creative accounting from McDonalds’ PR department.

Now you can clearly see how the expense side is equally unrealistic. Remember, it’s politically important to show that even low income workers can save, so notice how “savings” is the first “expense”. Notice also that is shows $20 a month in health “insurance”. Funny, McDonalds’ own health plan, which is meager (don’t get seriously ill, the maximum payment in a year is $10,000) and only some of its full time workers are eligible, costs $14 a week. $14 x 4.5 weeks a month = $63. So McDonalds can’t even make its own bare bones program work in this fairy tale budget. But those poor folks get their bread and circuses in the form of $100 for phone and cable. Needless to say, $600 a month won’t get you far in the rent category in a lot of major cities either. And how are you going to be able to hold down those two jobs if you live out far enough to have cheap rent but you have to spend a lot of time commuting?

Now let’s look at what is left. That $25 a day is supposed to cover food, gas, clothes, shoes, laundry, cleaning and personal care products, medication (OTC and prescription co-pays, which will be large given how cheap the medical plan is), dental treatments (no way does a $20 a month plan include dental), entertainment, and any travel to see family or friends.

Now the site tells you how to meet these goals:

So someone who is exhausted and time stressed is exhorted to use public transportation (they probably have to but presenting necessity as a virtue is patronizing).

And if they are working two jobs, how likely is it that they can maintain enough in the way of personal relationship to find someone to carpool with, even before we get to the odds of having schedules mesh? And of course, the low income person is supposed to be able to cook and plan.

The piece de resistance, however, is that this site pushes payroll cards:

Even though McDonalds was embarrassed by ThinkProgress into acknowledging that its employees who own homes might need to pay for heat, it’s apparently not backing down on the use of payroll cards that are being examined by Federal and state prosecutors for possible violations of minimum wage and consumer protection laws. A Consumer Reports study from 2012 looked at a large sample of these cards and found that workers were likely to incur $10 to $30 in monthly charges, with $15 to $25 typical.

In other words, low income workers must strenuously avoid doing everything Big Money and Big Food and Big Retail are trying to get you to do through multibillion public relations and marketing campaigns, and use as many of the public services that these same firms are in the process of destroying.

But with all this, the claim is that “You can have almost anything you want as long as you plan ahead and save for it.” See what nice well scrubbed healthy looking people are promoting this-budget-your-way-to-virtue theology: 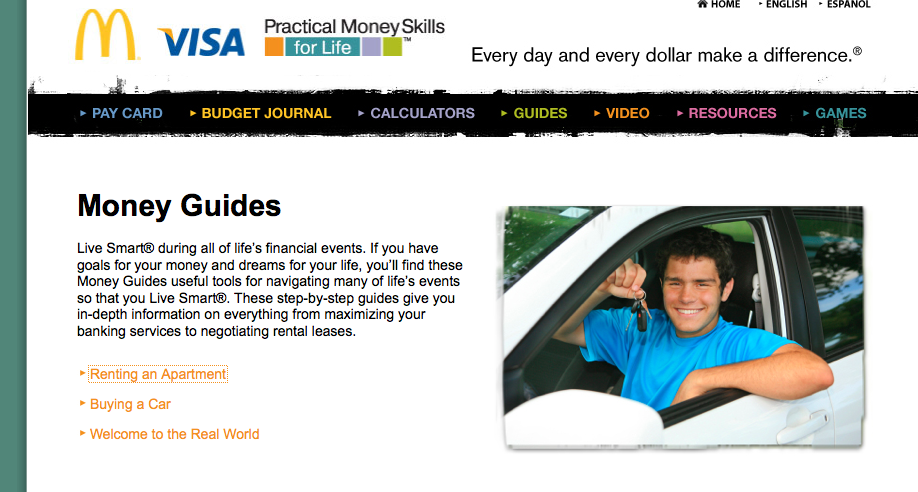 And look how easy renting an apartment is, according to link that takes you to Visa (well except for the creepy and aggressive hawking of credit reports): 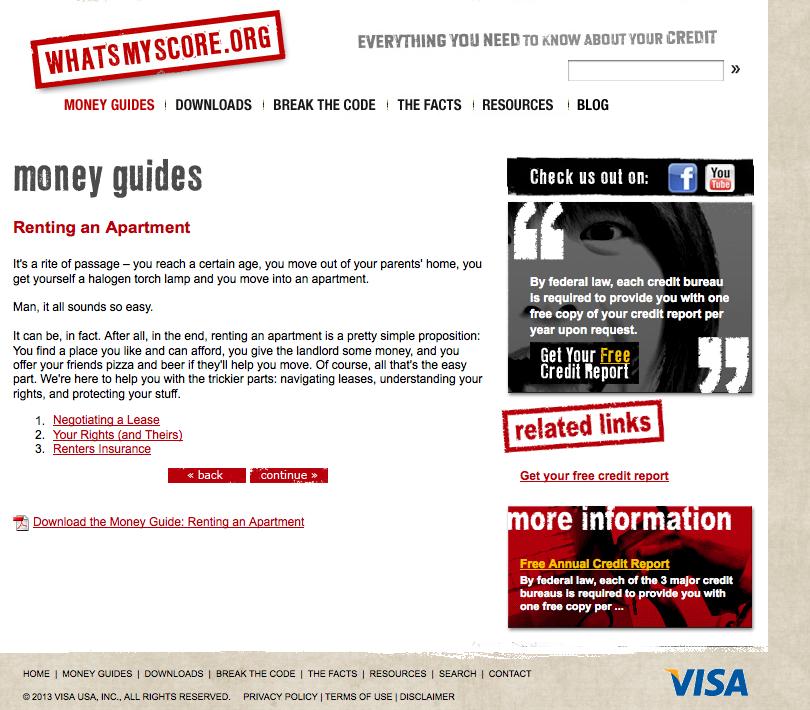 It might help if we leave the Orwellian “Wealth Watchers” version of a McDonalds worker’s financial prospects and look at the reality. From Bloomberg last December:

Tyree Johnson scrubs himself with a bar of soap in a McDonald’s (MCD) bathroom and puts on fresh deodorant. He stashes his toiletries in a Kenneth Cole bag, a gift from his mother who works the counter at Macy’s, and hops on an El train. His destination: another McDonald’s…

He needs the makeshift baths because hygiene and appearance are part of his annual compensation reviews. Even with frequent scrubbings, he said before a recent shift, it’s hard to remove the essence of the greasy food he works around…

Johnson, 44, needs the two paychecks to pay rent for his apartment at a single-room occupancy hotel on the city’s north side. While he’s worked at McDonald’s stores for two decades, he still doesn’t get 40 hours a week and makes $8.25 an hour, minimum wage in Illinois…

Johnson begins most days the same way: picking cigarette butts out of the shower drain of a shared bathroom, using a tissue so he doesn’t touch them. While there’s a “No Smoking” sign posted inside the hotel where he lives, that doesn’t stop the other occupants who share the showers, sinks and toilets.

His rent at the hotel in Chicago’s Uptown neighborhood is $320 a month. Johnson usually can’t cover it all at once, so he’s allowed to pay $160 every two weeks, or even $80 a week, for his first-floor room. He’s late on November rent and owes about $100 — some of it a late-payment fee, he said. Since falling behind, he’s put off buying a Dell laptop for $99 that he found online.

“Forget about that computer,” Johnson said. For now, he’ll keep going to a local Apple store when he wants to update his Facebook page in his efforts to find someone nice to date and to stay in touch with his father.

A pay stub of Johnson’s shows that he earned $8,518.80 through Sept. 9 this year at the store that gives him most of his hours. He was able to work only 52 hours during the two- week pay period ending that date because the restaurant was being remodeled, he said. A statement of earnings from his other McDonald’s job shows that he worked fewer than 12 hours over two weeks, earning $95.45 before taxes.

And his early efforts to better himself didn’t help. Johnson took out a student loan in 1987 right after high school to take a six month course and get a computer certification. He was able to finish paying off the loan only a couple of months ago.

So the message of the well-off to the struggling is work long hours at grossly underpaid jobs, when those “long hours” can’t even be cobbled together in this crappy economy, and then work really hard the rest of the time to stretch your meager earnings as far as humanely possible. This is just a prettied-up version of Dickensian sweatshops. The working conditions and hours are somewhat less grinding and we now have more varied forms of cheap entertainment, but the underlying premise is similar: the elites prefer a savage, mercenary version of capitalism to the less ruthless one that labor was able to win out of its protracted, hard-fought battles. The resulting coarsening of social relationships and a waste of human potential are costs the top brass seem only too happy to incur.