Yves here. As has become typical of late, the markets reacted sharply to the release of the FOMC minutes on Wednesday and Bernanke’s remarks later. For a really good effort at parsing the minutes, see Fedwatcher Tim Duy. The one clear conclusion was how unclear the minutes were:

Consensus about the future path of policy appears to be lacking, with “several” on one side of an issue and “many” on the other. The muddled approach to communications is also evident. But the fact that they made a relatively bold move despite the initial lack of consensus suggests that a strong hand pulled them in that direction. Who could that be? Little doubt that it was Federal Reserve Chairman Ben Bernanke, who also felt like it was necessary to lay down the law a little tonight and make clear what market participants have been unwilling to hear: Quantitative easing and interest rates are two separate policies.

And even though Bernanke made nicer noises later, Duy was still not certain you could say anything had really changed:

There is enough material today for everyone to walk away believing their priors. The mass confusion within the FOMC minutes alone suggest substantial factions on boths sides of the taper/don’t taper debate. That said, I think it is difficult to walk away from today’s events with a sense of certainty about the September taper. But I also think that the minutes suggest that someone brought a divided FOMC together around a common plan – a plan to put the taper on the table sooner than later but attempt to walk a tightrope with respect to interest rate policy. And I can’t see how that someone is anyone but Bernanke.

The MacroBusiness post below, which is another good recap, also stresses that the Fed is trying to distinguish between “tightening” which is a term it uses to refer only to increasing short term interest rates, versus tapering, which is ending QE. So despite the reaction in the bond and foreign exchange markets to the Fed chief’s comments, I’m not certain Bernanke has really backed off that much. The Fed was never talking about “tightening” any time soon. That was always off the table. So for Bernanke to say, “Highly accommodative monetary policy for the foreseeable future is what’s needed in the U.S. economy,” is simply a reaffirmation.

But remember, the flip side is Mr. Market derives great comfort from believing the central bank is solicitous. That was what was striking about the first month after Bernanke first used the “taper” word. Mr. Market was clearly upset and no one associated with the central bank went out to make reassuring noises. So a non-reassurance reassurance can be an effective market placebo. Ben sounding concerned is meant to sound like a concession but it’s not clear he’s offered a concession. But Mr. Market wanted to be reassured so he has interpreted it as reassurance. And folks like Marc Faber were saying bonds and gold were oversold two weeks ago, so technically a bounce was probably overdue too.

By Greg McKenna, the CEO of GlobalFX who has spent two decades in senior roles in the banking industry including Head of Currency Strategy at the NAB and Westpac. Cross posted from MacroBusiness

It’s all about the Fed, the FOMC minutes and Fed Chairman Bernanke this morning as FX markets in particular are reacting in a remarkable fashion to a perception that the Fed has been more dovish in the minutes to the recent FOMC meeting and that the Fed Chairman has likewise entered a note of caution into the debate.

I think this is a complete misinterpretation of what the minutes portray and what the Fed Chairman is trying to do. Rather I think the signal being sent right here and now is that there is a clear disconnect between taper and higher rates in the US. They were never the same thing but you would have thought so if you looked at the US bond rates and US mortgage rates and the Fed and its Chairman are clearly trying to signal the disconnect between the taper – which is coming – and higher rates, which are not.

…several members judged that a reduction in asset purchases would likely soon be warranted, in light of the cumulative decline in unemployment since the September meeting and ongoing increases in private payrolls, which had increased their confidence in the outlook for sustained improvement in labor market conditions.

BUT CRUCIALLY FOR THE LONG TERM OUTLOOK FOR RATES:

Many members indicated that decisions about the pace and composition of asset purchases were distinct from decisions about the appropriate level of the federal funds rate, which would continue to be guided by the thresholds in the Committee’s statement.

So we can get the taper without higher rates but we’ll still get the taper if 195,000 jobs last week have anything to do with it but the fed is signalling that rates won’t rise and Bernanke has explicitly said in his talk, or questions at least, that a 6.5% unemployment rate is not a trigger for higher rates necessarily and also that the tightening in financial conditions that has occurred since talk of the taper has been so strong is unhelpful for the US economy and its recovery and will be dealt with.

Unfortunately what appears to be happening is a kind of reversal of Alan Greenspan’s 2005 “bond market conundrum”. Despite Greenspan raising interest rates then, bond and mortgage rates refuse to rise because global capital flows kept them down. Now we have a Fed chairman trying to exit extraordinary stimulus without raising rates yet the money flooding out of bonds is sending real rates through the roof.

In time I expect the taper and, hopefully, for bond rates to fall back into line.

But you would swear that Bernanke and the FOMC just said they are going to buy more bonds and there is no taper if global FX market price action this morning is anything to go on. The moves have been amazing in the magnitude of the US dollars pummeling in such a short space of time. 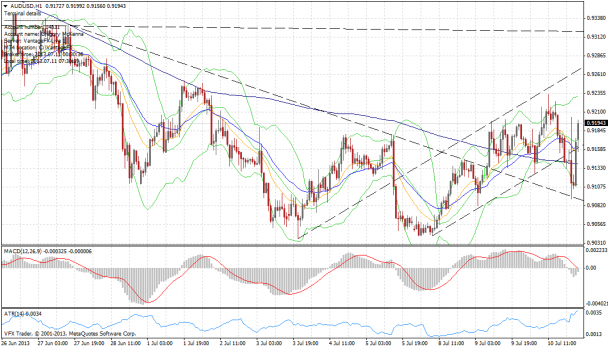 I made about 120 odd points yesterday trading the Aussie from the short side mostly based on the hourly charts. You can see the levels of the past few days in the chart above. What you can also see is that there is quite a bit of clear air on the topside if this rally wants to get a wriggle on but just like yesterday at some point today I will be happy to go short above 92 cents again but with a caveat of only while it is below 0.9237 (high just now). 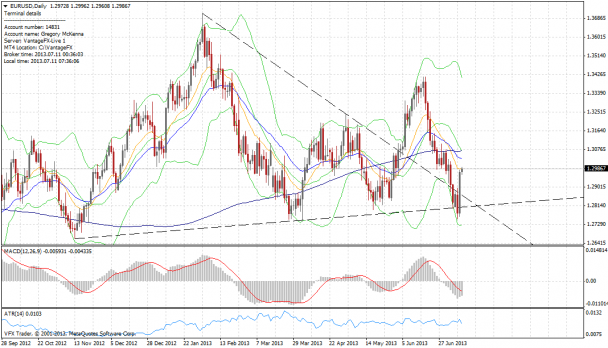 The euro looks a good sell while below 1.3035 and Sterling while below 1.5062. But a word of warning. Mandlebrot warns us that volatility begets volatility so this is not a time for positioning heroics or forgetting one’s stops.

In other markets the Dow and S&P were up a little but basically unchanged, Europe was under pressure. 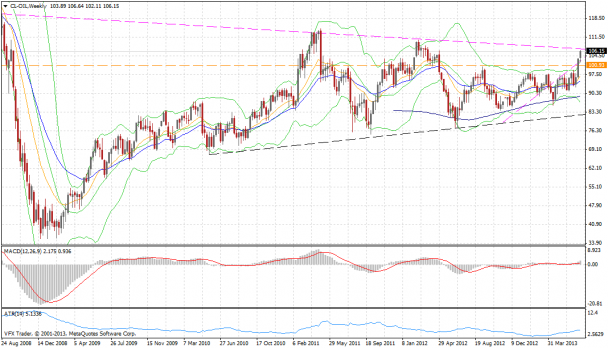 As noted above Nymex crude is at levels not seen for the best part of 18 months but equally as you can see above there is some overhead resistance. The rally is fundamentally based in some very solid draws over the past 2 weeks of an average of 10 million Bbls.