On Tuesday, Pravda informed us that the White House was “ramping up” its efforts to market ObamaCare, and that among those efforts would be “a Google hangout Wednesday to promote its enrollment Web site,” www.healthcare.gov [sic*]. Some of us also received a mail blast giving the event details, and inviting us to submit questions via twitter to #HCgovHangout. Needless to say, many of us noted the date and submitted questions, and when the time came, we were not disappointed…. I grabbed the live stream off Google[‘s proprietary site]; here it is:

The two talking heads in the video are Julie Bataille (left), Director of CMS’ Office of Communications, and Kristin Rowe-Finkbeiner (right), Executive Director/CEO and Co-Founder of MomsRising.** (The other co-founder is Joan Blades, also a co-founder of MoveOn.org.) Rowe-Finkbeiner’s presence explains something Donna Brazile said on ABC’s This Week, working her kayfabe routines with George Will and some other Sabbath Day gasbags (clip):

How are they going to organize that? I asked myself. Now I know. Mom’s Rising is the answer! (That said, though I hold no brief for Will’s viciousness, if I were young, healthy, in debt from college, and facing Obama’s brutal job market, I’d think twice about spending a dime on a defective product like health insurance.)

We’ll have a transcript of the hangout tomorrow — our transcriber took about ten minutes to do it, which gives you an idea of the depth that Bataille and Rowe-Finkbeiner brought to their “conversation” with us — which I will color code. For today, however, I color-coded the tweets themselves; the exercise yielded some interesting results. Here are the results in tabular form: 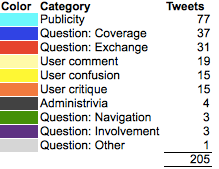 (Appendix I shows the coding for the entire stream; the colors to the left of the tweets correspond to the colors in this table.)

From a public relations standpoint, the two most important categories are Publicity (72 tweets;   ) and User Confusion (15;   ) combined with User Critique (15;   ). Why?

Well, there were a ton of Publicity tweets, but they all looked like this, with varying degrees of chirpiness:

Unfortunately, most if not all the Publicity tweets got the URL wrong, resulting in User Confusion tweets like this:

#HCgovHangout Where is the Google Hangout? 2:40pm. Will it go past 3pm?

#HCgovHangout Trying to connect to the live hangout: Most unsatisfactory experience! No way to connect & no contact info listed for help!

wrong link, 15 minute conversation, and no correction with the RIGHT link? #HCgovHangout does not make me feel good about implementation!

@mphippsm @RachelFey Hope you're doing BetaTest of Exchanges now because this kind of thing on Oct 1st would be a disaster! #HCgovHangout

(Disclosure: Katiebird worked with me and others to develop questions for #HCgovHangout.)

The next most important set of tweets (“Question: Coverage”) was on what ObamaCare’s health insurance plans will cover (37 tweets;   ). Here’s an example:

Will the health plans on the exchanges offer full range of MCH services including midwives and birth centers? @HealthCareGov #HCgovHangout.

As we shall see with the transcript in Part II, a few of the more general coverage questions were answered, but specific questions demanding precision — as above — were not. (This is important, because ObamaCare’s mind-boggling complexity makes for a staggering number of very specific questions.)

The final important set of tweets (“Question: Exchange”) focused on how the exchanges were supposed to work, and whether they would be ready by the October 1 deadline (30 tweets;   ). Here are some examples:

• #hcgovhangout which of the 50 state #obamcare exchange marketplace 100% complete and in beta testing? Can you give me a status on Ohio?

I've heard there are problems getting things ready for Oct. Have you started testing the system? #HCgovHangout

None of these questions were answered, including other questions on the 10/1 drop-dead date.

Amazingly, a question I posted was answered; I’ll talk about that in Part II as well.

Summing up: The #HCgovHangout launch was a public relations debacle.

1. If the publicity campaign had really been a success, Publicity wouldn’t have been the category with the largest tweet count; real tweets with real questions would have outnumbered the professional PR tweets by at least an order of magnitude. Of course, the announcement appeared at the last minute, only a day in advance of the Hangout. Was this session a dry run? Lack of planning? What?

2. Embarassing technical and user experience failures — wrong URL; no help; no official corrections on the stream; nothing on the principals’ twitter profiles — cannot but give the impression of a program that’s out of control. Given that so many of the aspects of ObamaCare that raise concerns are technical — even after Obama gutted the Exchanges by descoping the employer reporting requirement and income validation — that’s an especially unfortunate impression to convey.

4. Bataille and Rowe-Finkbeiner shy away from the “Will you be ready by 10/1?” questions. Curious! Or not, eh?

So: Last minute planning, out of control, and out of touch. And maybe out of time. Quite a message. I wonder what the White House will think?

NOTE * Of course, ObamaCare apologists consistently conflate health care with health insurance; the two are not the same, shown most vividly in the fact that health insurance companies profit by denying health care, not giving it. This tactic verges on disinformation.

NOTE Again, back in the days of steam-powered mainframes fueled with punch cards, LBJ rolled out Medicare to the entire over-65 population in a year. That shows the difference between single payer’s simple and rugged system architecture, and ObamaCare’s underwhelming complexity.

So you can see the coding, here are thumbnails of the #HCgovHangout twitter stream from the first tweet ’til I turned off the recorder at 3:00PM (there are doubtless more tweets following the hangout). You can click each thumb to get a barely readable larger version; technical limitations (a tiny laptop screen) dictate the small size. These thumbnails are screen dumps from the twitter feed, cropped, pasted together, and then color-coded in InDesign; this clumsy manual process has certainly led to occasional errors, which will not substantively affect the chart. As in Twitter, the posts read from the present to the past, 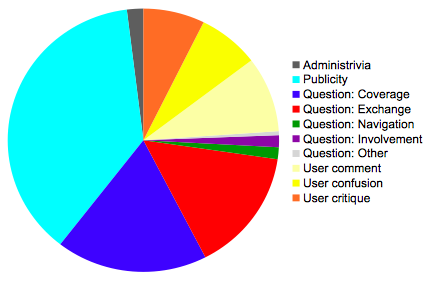