Yves here. I wonder if the pattern described in this article, which is basically a brain drain of inventors to the US, is playing a meaningful role in the degradation of public education in the US. Why do the elites need to care about home-grown “talent” if they exploit the investments in schooling made by other countries?

Migration is a hot-button issue across the globe. This column summarises new evidence on the patterns of skilled-worker migration, focusing on the specific case of inventors. A novel data source that traces worldwide migration flows for inventors suggests that, excluding a few nuances, the economic incentives for general migration also seem to influence inventors’ migration decisions.

Many countries are currently debating and reforming their immigration policies. One prominent question in these discussions is how to attract skilled workers that can ease domestic skills shortages and foster innovation and entrepreneurship.

Examples abound of how the foreign-born contribute to scientific progress, technological advances, and business success. We estimate that around 30% of Nobel Laureates resided outside their home country at the time of their award.1 Take the case of Professor Venkatraman Ramakrishnan, who received the 2009 Nobel Prize in Chemistry for studies of the structure and function of the ribosome. Professor Ramakrishnan was born in India and studied at Ohio University. When he received his Nobel Prize, he worked at the Laboratory of Molecular Biology of Cambridge in the UK. Like many of his fellow Nobel Laureates, Professor Ramakrishnan has been a prolific inventor, applying for numerous patents.

Going beyond anecdotal evidence, how important is the contribution of skilled immigrants in different countries? What determines their decisions to migrate and how do these decisions affect host and home countries? In this column, we use a novel data source that traces worldwide migration flows for one specific class of skilled workers – namely, inventors. We review the main patterns emerging from the data and discuss preliminary evidence on what leads inventors to migrate.
What can patent data tell us about skilled migration?

Economists have made important progress in better understanding the causes and consequences of skilled-worker migration (Docquier and Rapoport 2012). New cross-country census-based databases have been an important impetus behind new insights (Carrington and Detragiache 1998, Docquier and Marfouk 2006, Özden et al. 2011).

Yet, despite these improvements, important data limitations remain. Census-based datasets observe migration stocks only every ten years. Countries differ in how they define skilled workers, especially when the sample includes non-OECD countries. In addition, existing skills categories are often broad; the qualification of tertiary-educated workers, in particular, may range from non-university technical degrees to doctoral degrees.
To overcome these limitations, we rely on an entirely different information source – patent filings. Patent data are available for many countries and without any break in time. In addition, they capture inventors – a class of workers at the upper tail of the skills distribution and arguably a more homogenous class than tertiary-educated workers as a whole. More generally, inventors have special economic importance, as they create knowledge that is at the root of technological and industrial transformation.

Patent documents list the companies or individuals applying for the patent; equally important, they list the inventors who have contributed to the invention for which the applicant seeks protection. Unfortunately, patent documents typically record only the names and addresses of inventors, but do not provide any further information on an inventor’s biography. Agrawal et al. (2011) and Kerr (2008) have identified immigrant inventors relying on the cultural origin of inventor names. This approach has yielded important insights; however, it can only be applied in certain jurisdictions and it may be misleading when the migration history of certain ethnicities spans more than one generation.

So Who is Winning the Race for Inventors?

Existing datasets point to an overall migration rate of 1.9% in 2005, and 4.8% for tertiary-educated workers. Our data suggest that inventors are far more mobile, with 10% of inventors worldwide showing a migratory background in 2005.

The US is by far the most popular destination for migrant inventors (Figure 1), hosting 57% of the world’s inventors that reside outside their home country. Moreover, there are 15 times as many immigrant inventors in the US as there are US inventors residing abroad. Switzerland, Germany, and the UK also attract considerable numbers of inventors. Interestingly, though, Germany and the UK see more inventors emigrating than immigrating. Canada and France similarly show a negative net inventor immigration position. 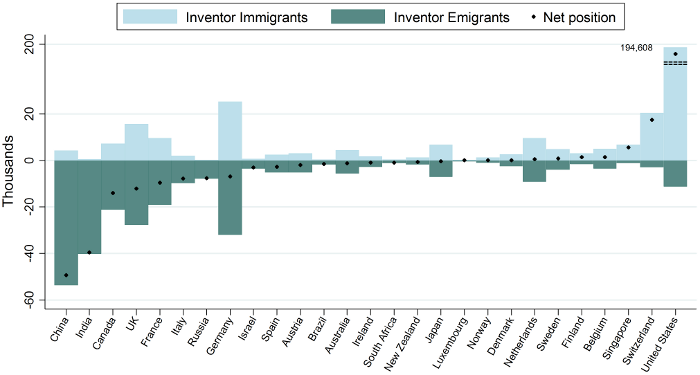 Immigrant inventors account for 18% of all inventors residing in the US. Several small European countries see even higher immigration rates –notably, Belgium (19%), Ireland (20%), Luxembourg (35%), and Switzerland (38%). Among the larger European countries, the UK (12%) shows a relatively high share of immigrant inventors. By comparison, foreign nationals only account for 3% to 6% of all inventors in Germany, France, Italy and Spain. Japan is the only high-income economy with an inventor immigration rate of less than 2%.

Inventor migration is a concentrated phenomenon. The 30 most important bilateral migration corridors account for less than 0.08% of all corridors in our dataset; yet, they account for close to 60% of overall inventor migration. Among the 30 top corridors, the US is the most frequently listed destination. Most origin countries are other high-income countries, although the top two corridors – China-US and India-US – have middle-income country origins.

Looking specifically at south-north migration, the lead position of the US is even more pronounced: close to 75% of migrant inventors from low- and middle-income countries reside in the US. China and India clearly stand out as the two largest middle-income origins, followed by Russia, Turkey, Iran, Romania, and Mexico (Figure 2).

What Leads Inventors to Migrate?

In follow-up research (Fink et al. 2013), we study what determines the location decisions of inventors. We find that many of the variables that explain overall migration also explain inventor migration. In particular, economic incentives positively affect inventors’ decisions to migrate and the costs of relocating to another country exert a negative influence on these decisions.

However, interesting differences with the general population of migrants emerge. Most migration cost variables exert a smaller effect for inventors than the general population. We interpret this as evidence of highly skilled migrants being better informed about job opportunities, being more adaptive and being better able to surmount legal obstacles to migration. One notable exception is sharing a common language with the destination country, which we find to matter more for inventors. This could suggest that communication plays a more important role for highly skilled occupations.

The resulting question is why we see, for example, German inventors emigrating to the US and US inventors emigrating to Germany. One explanation may be that inventors specialise in certain skills and different locations specialise in research activities demanding those skills. There may well be other explanations. More research is needed to refine and deepen our understanding of what explains bidirectional inventor migration patterns.
Conclusions

This column summarised new evidence on the patterns and determinants of skilled-worker migration, focusing on the specific case of inventors. We believe that patent data can shed new light on the causes and consequences of skilled-worker mobility. In addition to the research outlined here, our data can offer insights into the influence of skill-selective immigration policies. More generally, they can be used to study how immigrants contribute to innovation performance in the host country, what role they play in the international diffusion of ideas, and how diasporas and return migrants benefit the economies of sending countries.

Scholars have emphasised the latter dimension to argue that skilled migration is not a one-way street. To return to our original example, Professor Ramakrishnan has rebuilt his ties with his homeland and regularly visits Bangalore, where he interacts with colleagues – especially young scientists.