Yves here. Even though Delusional Economics has moved into a guardedly positive stance on Europe, the “recovery” is halting enough in Europe that there are still quite a few analysts on the other side of the fence. Wolf Richter has an engagingly-written post on how unmitigatedly awful conditions are in hotels and restaurants are in France. And Ambrose Evans-Pritchard was kind enough to ping last week and express his considerable skepticism about the chattering about “recovery” in the periphery. Nominal GDPs are still falling, which means debt levels are still rising. And don’t get him started on the Draghi Put!

Another night of relatively strong data out of Eurozone with services and composite PMIs looking mostly stronger, the UK also screamed ahead.

July marked a tentative return to expansion for the eurozone economy, as manufacturing output posted a solid expansion and the trend in services activity moved close to stabilisation. At 50.5 in July, the final Markit Eurozone PMI® Composite Output Index rose to a near two-year high and posted above the neutral 50.0 mark for the first time since January 2012. The headline index was marginally above its flash reading of 50.4.

Manufacturing production rose at the fastest pace since June 2011, as the sector registered output growth for the first time in 17 months. Meanwhile, the rate of contraction in services business activity was negligible and the weakest during the current one-and-a-half year downturn in the sector. 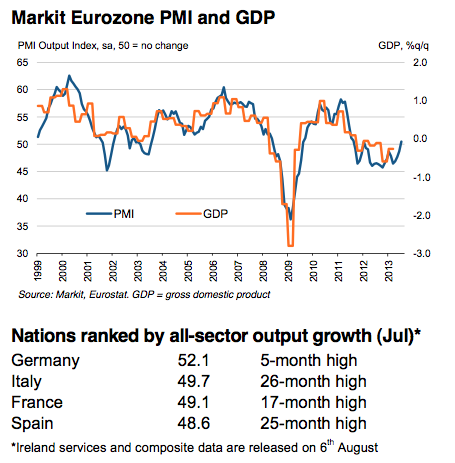 So as we’ve seen over the last month or two the news out of the Eurozone is slowly getting better and it’s definitely great to see that even the Italians have managed to slow the rate of decline, although contraction is still evident, as it is in Spain. It must be noted however, as I spoke about last week, this is all taking place in an environment in which periphery debt to GDP continues to grow. That is, the government sector is still providing an offsetting deficit that allows this private sector adjustment to take place in the absence of large enough external demand. Re-balancing is taking place, but there is still a very long way to go with this adjustment, as can be clearly seen from the rate of unemployment in many of these countries. There is a problem, however, and that is that many of these nations are reaching a point where debt to GDP once again becomes a concern. What is needed, and we are likely to see from in Greece in the near future, is a further write-down of debts before we can truly say there is a sustainable recovery taking place.

That reality, however, hasn’t stopped some “interesting” reporting on the matter:

Can a program of austerity and structural overhauls extricate an economy from a debt crisis? Is it really possible for a country to achieve a so-called internal devaluation—restoring its competitiveness by cutting wages and boosting productivity rather than lowering its external exchange rate? Are European democracies capable of confronting vested interests and coping with the resulting social upheaval?

Until now, the small group of believers—mostly to be found in Berlin—have been widely dismissed as freaks or sadists. The conventional wisdom argued that the only possible escape for countries like Spain was a large-scale mutualization of euro-zone sovereign debt or to quit the single currency.

The government of Mariano Rajoy has, however—through necessity as much as conviction—set out to prove them wrong.

What is certain is that the stakes couldn’t be higher—for Spain and the euro zone: A self-sustaining recovery would remove one of the biggest threats to the survival of the single currency.

No less importantly, it would vindicate Berlin’s approach to handling the crisis and send a powerful message to other governments tempted to look to debt mutualization as an easy alternative to the hard business of reform.

I genuinely hope that isn’t the actual position of the “small group of believers” and this is just journalistic silliness. I mean seriously, you don’t have to look very far to find evidence of the massive destructive social implications these programs had on the future of Spain. A recent story from the BBC for example:

Scientists in Spain claim the long-term future of the country is being sacrificed, because of what they call “short-sighted” austerity measures.

Research and development in Spain has been cut by around 40% in the past five years. The Spanish government says the private sector needs to do more, but many scientists are simply leaving Spain and taking their work abroad.

And it’s not like those supposedly able to claim vindication weren’t complicit in exacerbating these long term issues, in fact they were running domestic programs to exploit these exact problems:

Germany’s International Placement Service (ZAV), which is responsible for recruiting foreign workers to fill the gaps in the country’s job market, is feverishly scouring southern Europe for skilled workers such as engineers and scientists, nurses and care workers.

On top of that there were incentive programs to entice the youth from other nations to come and work in countries that were doing better economically:

Germany has launched a £120 million drive to entice young workers from Britain to come to the country and work as apprentices by offering generous all-expenses-paid schemes.

Obviously there is nothing wrong with these programs in a single-market, and I would hope that one day Spain recovers to a point where it can do some enticing in the other direction. But it is quite incredible that an ideology that has been perpetually wrong for the past 5 years, can sweep all of that under the carpet and claim victory when it can finally find one example that may, possibly, at some time in the future, vindicate a position.

There is much more to be done in the Eurozone and things are slowly improving, but misreporting history and harking back to old policy failures as if their atrocious outcomes were expected, and now the are some form of success, certainly isn’t going to help anyone.