Your humble blogger generally refrains from writing about stocks for a host of reasons. First, there are tons of sites that cover equities actively, sometimes frenetically, with the authors typically money managers (raising the question of whether the stock or idea that they are pushing is talking their book, and worst, not because it’s a position they’ve taken and are keen about but one they are in the process of exiting). Second is that one can make the same comment about stock forecasting that one makes about forecasting generally: if you must do it, do it often (as in hope your new wisdom blots out the memory of the inevitable bad calls).

But for me, maybe the biggest reason for my lack of a strong interest in the stock market is the direct result of first real job in stock and bond underwriting. You may recall the famous saying by Bismark, if you like law and sausages, you should never watch either one being made. Well, for me, having watched how securities are made has reduced my appetite for them. I’m of the Amar Bhide school, that equities have so little in the way of rights (you get a dividend when management has the dough and is in teh mood to pay one, and you have a vote than can be diluted pretty much any time) that they aren’t suitable to be traded on an arm’s length, anonymous basis (his argument, and I concur, is that an equity investor should have a VC-like relationship with management, he should know management personally and have access to competitively-sensitive information, such as the company’s strategies and plans).*

However, the US equity markets have come to play an outsized role in the US from a policy and practical level. It’s never a good idea to try to assess complex phenomena with a single metric, yet for much of the public and the officialdom, the level and trend of the stock market is a proxy for the health of the economy (this view seems to have become even more entrenched over time, with the dot-com era allowing for intra-day dissemination of prices and Greenspan’s personal obsession with stock prices as contributors). So as the Greenspan and Bernanke puts attest, policymakers now have a vested interest in keeping the stock market up, both to boost confidence and out of personal vanity (if the stock market were to fall, that would mean they’ve done a bad job. Can’t have that!).

Another factor is that the stock market has played a significant, and all and all, not healthy, role in the restructuring of the economy. Without going into a longer form history (which would go back into the 1970s), a key development was the rise of share-price linked pay (a vogue that came out of a Michael Jensen paper in the early 1990s which he has since repudiated). That intensified and institutioanlized a trend towards short-termism and underinvestment (any investment also has associated up front-expenses, which will affect earnings before the investment pays off. See this paper for a longer discussion). When I was briefly in the business of playing a bit part in creating securities to be sold to the public in the early 1980s, it would have been seen as an extreme view to contend that companies should be run to suit shareholders over everybody else. Equity is a residual claim: payments to shareholders come after paying suppliers and employees, bondholders, leases and licenses, legal claims, and taxes. But our new ideology is that the last should come first. And to achieve that, companies in the US have abandoned the model of sharing the benefits of productivity gains with workers: 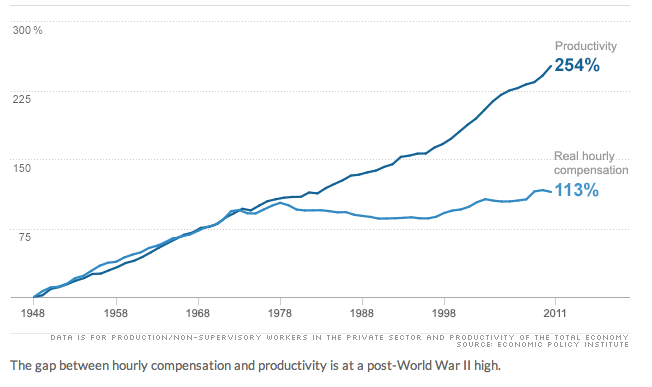 As this trend has accelerated, we’ve also seen falling levels of corporate investment. As I noted in a 2005 article, companies were net savers, which was unheard of at any time other than in a recession (the corporate sector is normally a net borrower in order to help fund expansion), as well as the rise in profit share of GDP relative to the amount of GDP growth paid to workers. It turns out those two developments were not unrelated. Not sharing wage gains with workers makes it less attractive to invest, leading to lower GDP levels. I’d argued in 2005 that companies were like neurotic bodybuilders, creating perfect-looking outsides while ruining their health. In an important Angry Bear post, Edward Lambert modeled that these two behaviors are intrinsically linked: lower labor share lowers investment returns. And at lower investment return levels, companies will indeed invest less (even before you get to the fact that short-termism also leads them to seek inappropriately high return levels).

And it’s even worse than this bloodless analysis suggests. Readers know all too well of the have and have-not world of work in America. People who are employed at reasonable to good income levels for the most part think the economy is fine. But people who are out of work or have unstable employment know how bad conditions are. Cohorts that traditionally held up well in bad times, such as new college grads, are having a particularly rough time.

And that recognition that we have a two-tier economy is finally reaching the consciousness of our generally oblivious elites. Admittedly, Larry Summers is on his best behavior these days as a result of campaigning to become the next Fed chair (I saw Summers speak when he was similarly pumping to become head the World Bank, and the contrast with his off-the-charts arrogance at an INET conference was remarkable). Summers, yes the same Summers who as Stephanie Kelton reminds us at DE Shaw had no compunctions about coming up with trading strategies that would rip off pension funds warned participants at a recent conference that he thought corporations had pushed profits at the expense of labor as far as they could go. More would be socially destabilizing. And I gather he didn’t mean “socially destabilizing” as in more homelessness, but in class-based violence.

This backdrop helps explain puzzled sightings by astute commentators, such at John Authers at the Financial Times, who provides an important piece on what he calls “profitless stocks“:

According to Bloomberg data, trailing 12-month earnings per share for the S&P 500 are 16 per cent above their level of October 2007 (when both earnings and share prices peaked before the financial crisis). On the same basis, earnings for the MSCI EAFE index, covering the rest of the developed world, are down 37 per cent. Those for the FTSE-Eurofirst 300 are down 42 per cent.

Earnings for the MSCI emerging markets index are up since October 2007 – but by only 13 per cent, having peaked and started to decline two years ago.

Look closely at the raw numbers for the US (with thanks to the regular Equity Market Arithmetic research produced by Société Générale’s Andrew Lapthorne), and they turn out to be less inspiring. S&P 500 companies are on course to increase earnings by 3.6 per cent year on year for the second quarter. But they have declined by 1.3 per cent once financials are excluded. During those 12 months, bear in mind, the S&P gained 18 per cent, and its financials index gained 33 per cent.

Other factors to consider:

That 16% trailing EPS gain is nominal. Inflation, as measure by the CPI since 2007 is a smidge under 13%. Even in a world of ZIRP, that’s hardly much return for equity risk.

We’ve had a couple of good quarters of S&P earnings. Is this really a recovery or just a bit of an outlier?

Authers points out that companies are guiding earnings expectations lower, while managing to produce the “aha” of upside surprises relative to that. And here is his zinger:

US companies are not generating that much in revenues but, over the past 12 months, they returned a record amount of it to investors, according to JPMorgan. This is an admission that they see few opportunities to invest for growth. But, in an environment where investors take little on trust and are desperate for a yield from anywhere, it has helped the rally keep going. This is not a strategy that can last forever. At some point, companies must start generating more revenues and profits with which to make these payouts.

Now of course, this behavior can continue until it doesn’t. Large companies are siting on boatloads of cash, so many can continue to buy back stock for quite some time.

While economists in the US are becoming more positive about the outlook here, Warren Mosler by e-mail says that he thinks they’ve misread the impact of deficit cutting in combination with no growth in private sector borrowing. Bridgwater Associates argues in a new report that the developed world will be the driver of growth (meaning the US can’t look to it as much as in the past to help lift global growth) and Europe, which is hardly robust, faces further headwinds as a result of the Basel III requirement that Eurobanks shrink their balance sheets by €3.2 trillion by 2018. Of course, if you are fundamentally oriented, as I am, it’s hard to wrap your mind around a market where the authorities have aggressively and deliberately been manipulating the dials and now are saying they’ll do that less going forward.

Even outside the field of finance, Americans are apt to be unduly interested in discovering what average opinion believes average opinion to be; and this national weakness finds its nemesis in the stock market. It is rare, one is told, for an American to invest, as many Englishmen still do, “for income”; and he will not readily purchase an investment except in the hope of capital appreciation. This is only another way of saying that, when he purchases an investment, the American is attaching his hopes, not so much to its prospective yield, as to a favourable change in the conventional basis of valuation, i.e. that he is, in the above sense, a speculator. Speculators may do no harm as bubbles on a steady stream of enterprise. But the position is serious when enterprise becomes the bubble on a whirlpool of speculation. When the capital development of a country becomes a by-product of the activities of a casino, the job is likely to be ill-done.

And I’ve never liked the idea of going to a casino. Why play when I know the house always wins?

____
* Please don’t try arguing that the stock market is indispensable to the financing of business. Bhide is a professor of entrepreneurship and has been investigating the funding of new ventures for the nearly 20 years. Suffice it to say much of the work ex Bhide suffers badly from “drunk under the streetlight” in that research focused on VC backed companies which are only about 1% of all startups, and only about 25% of the biggest, fasting growing companies (Bhide uses the Inc 500 as his proxy). Moreover, there are other regimes, most notably the German Mittelstand, of high growth, internationally competitive, innovative companies, which came out of a completely different funding model than is present in the US. Yes, the stock market is now important in the US, but to argue for some sort of stock market manifest destiny is a big overreach.