Yves here. Let me underscore that the source for this article is not a granola-head organization but the Lawrence Livermore National Laboratory, which is one of the US national labs, or more formally, the United States Department of Energy national laboratories and technology centers. Per Wikipedia:

The national laboratory system, administered first by the Atomic Energy Commission, then the Energy Research and Development Administration, and currently the Department of Energy, is one of the largest (if not the largest) scientific research systems in the world. The DOE provides more than 40% of the total national funding for physics, chemistry, materials science, and other areas of the physical sciences. Many are locally managed by private companies, while others are managed by academic universities, and as a system they form one of the overarching and far-reaching components in what is known as the “iron triangle” of military, academia, and industry.

And as for how all this waste cited in the headline comes about, I can give an example in my family. My mother lives in a house built in Birmingham, Alabama in the 1950s. It is not insulated. Electricity was so cheap then that it was seen as cheaper to just heat it more in the winter and cool it more in the summer. And no, it’s not remotely feasible to retrofit it now. She does set her thermostat to 80 degrees in the summer, but that only reduces the amount of energy wastage. I’m sure readers can point to other egregious examples.

By James Stafford, editor of OilPrice. Cross posted from OilPrice

Each year the Lawrence Livermore National Laboratory releases an analysis of the energy input and energy use of the US economy to determine the energy efficiency.

It might be somewhat surprising to know that in 2012 the US wasted 61% of all energy input into its economy, making it just 39% energy efficient. 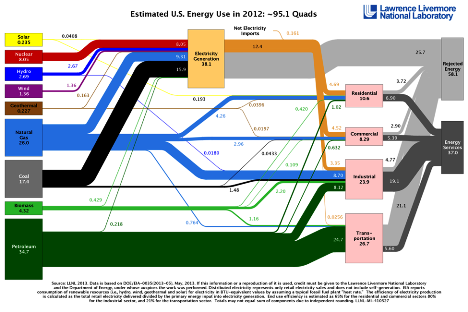 Power plants and internal combustion engines are notoriously inefficient, and as there use has increased, so the efficiency of the economy has fallen.

Some people even suggest that the 39% energy efficiency stated in the analysis is generous, with physicist Robert Ayres stating that the figure should be closer to 14%.

CleanTechnica show an interesting diagram explaining the amount of energy wasted by the US. (CleanTechnica)

For the past ten years the National Laboratory has calculated the US energy waste to be in the region of 50%-58%, but in 2012 this figure jumped to one of the worst levels in decades.

AJ Simon, a senior researcher at the laboratory explained that the jump was mostly due to a change in the ways that they calculated the end use of the energy for vehicles and households. After separate studies into the efficiency of household energy use in areas such as heating, air conditioning and lighting, the figure was dropped from 80% to 65%. Likewise, the efficiency of the internal combustion engine was revised down to 21% from 25%.