Planetary. He said planetary. OK, OK! The Episcopalians have a liturgy that, back in my day, was called “Star Trek”; it includes the beautiful phrase “this fragile earth, our island home” [warbling and woo-wooing noises under the rubric “optional”]. But bear with me. I’ll start with the leaves, and we’ll get to some ideas on governance from there, based on experience with landfill, land use, and fracking activism.

Alert reader AbyNormal sent in this post (“And they all fall down…”) from “climate witness” Gail Zawacki about fall foliage in New Jersey. It’s a what Yves might call a mother-in-law story (“My mother-in-law says…”), although we might also think of it as an observation. Excerpting from the post:

[I]t should be getting obvious that the leaves are turning brown, not bright colors like they should, as shown in these photos from years past. … Last Wednesday, September 25, I took the next series.  That’s a very tall sugar maple, which is in front of the old farmhouse, situated on the road in front of the property.  Not so long ago it turned blazing orange in the fall. It kind of looks like it is beginning to turn into autumn guise, but it’s not. The leaves are mostly turning brown.  This is very important to notice, because people are taking pictures of trees turning color and posting them online, without realizing that when viewed individually, the leaves are in a positively malevolent condition.  … This trend started several years ago, and every season it commences earlier, and is is even uglier.

At this point, I should pause to note that the economic effects of the fall foliage season are significant: 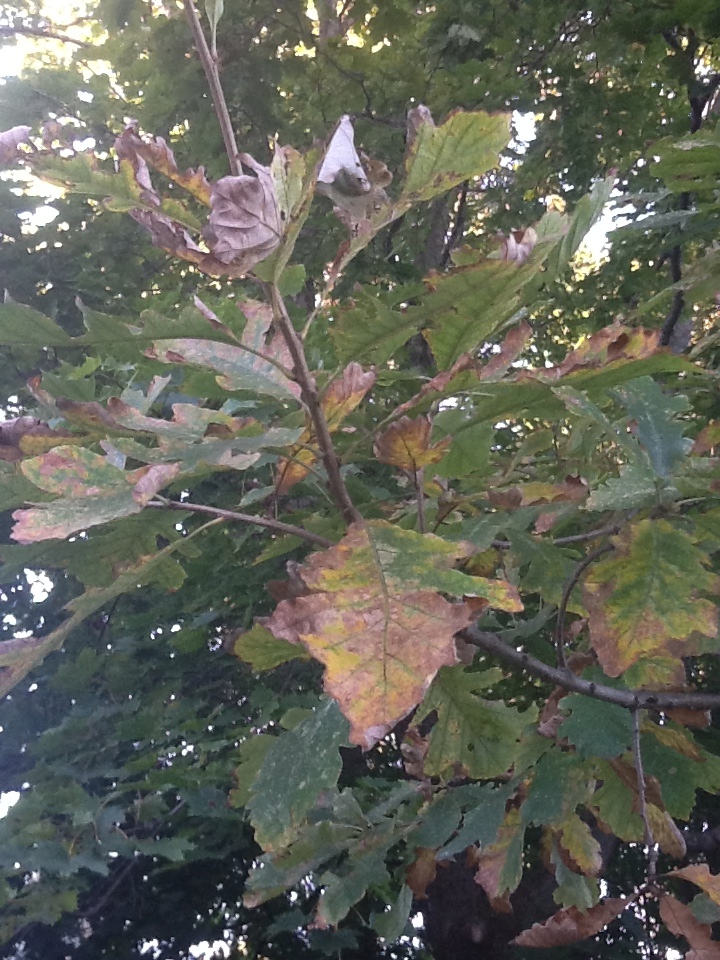 Indeed it is, especially for relatively poor states like Maine or Vermont. Anyhow, I was so creeped out by Zawicki’s post that I went out and around and took a few bad photos of trees where I am. My own horrible Norway Maple has always — probably because of its malevolent personality structure — shed brown, shrivelled leaves with spots and blight-spreading lesions, which doesn’t prevent me from bagging and banking the house with them; but this photo is of an oak across the street. Zawicki continues:

There doesn’t seem to be any tree or plant that doesn’t have leaves that exhibit the classic symptoms of ozone injury.  It also has many branches that are bare. I heard them before I saw them, because their leaves were not so much rustling as rattling in the breeze. They were brittle and stiff. Damaged on both the upper and undersides. Many of them were on the ground. Already, the climate change scientists are getting creative, trying to blame the dull colors of autumn on…climate change!

Remember, the leaves are supposed to turn color on the tree, THEN fall to the ground where children can gather them into soft piles to jump in, and only AFTER dry up and turn brown.

And now they’re browning on the tree. And indeed, when I think of my pre-geezer memories raking lots and lots of leaves, the leaves are red and not brown — another mother-in-law story, I know! Perhaps you, readers, have different childhood memories of different trees.

But I want to focus on a different aspect of Zawicki’s post; it is, in fact, a polemic: She points to symptoms on the leaves that indicate to her that ozone is responsible for browning the leaves and hence, lack of red color; and she quotes some scientists who disagree, who she regards as “getting creative.” Them’s fightin’ words! (Note that Zawicki is not a climate change denialist. How is such an important, $25-billion conflict between (some) citizen witness(es) and (some) scientist(s) to be resolved? If that conflict is resolved, how are conflicts in public policy to be resolved? Nobody wants all New England’s red fall foliage to turn brown — unless their own ox is gored, of course!

Here I’d like to introduce the awkward term “shed,” by which I don’t mean the sort of shed that one might build or purchase at a garden center, but “shed” as in “watershed” (an extent or an area of land where surface water from rain and melting snow or ice converges) or “viewshed” (“A viewshed is an area that is visible from a specific location”)* The $25 billion value of the Fall Foliage is in its viewsheds — red leaves visible from a specific location — considered collectively; and if we took a map and shaded all the fall foliage areas in New England crimson, all the crimson spots aggregated I would term a “shed” (even if using the same term for an area and a set of areas is a little bit of meta sleight of hand). Note that by definition, a shed is a commons.

So, in landfill activism, we had several sheds to consider: The watershed, since the landfill is cleverly situated in a bog at the confluence of two rivers; the viewshed, since the landfill, if and when built out to full expansion, would be visible for miles around; the airshed, since the landfill gives off odor and methane (and a project necessitated by the convoluted business dealings that sited the landfill created “sooting incidents” involving lead); and a truckshed, since (incredibly) much of the trash was trucked in from out-of-state, and, until recently, not on the Interstate but through the main streets of our towns. Each shed affected particular people at particular sites, and though the NIMBYs  — as usual —  had to put the whole picture together, since they are the only ones severely impacted enough to be incentivized to model the system and get in involved in the permitting and political processes, the landfill adversely affected many thousands of people, to the direct benefit of the landfill operator.** I’m sure that fracking activists face the same issues: Watersheds, both at the drilling and injection sites; trucksheds; viewsheds, if you’ve ever seen a shot of the Marcellus shale at night; airsheds, for odor; railsheds, for fracking sand.

The key point: We take our map of crimson viewsheds, and we draw lines on it: Property lines, town and city zones, county lines, state lines, lines for parks, lines for the service areas of public utilities, and many others, and the lines don’t match up with the sheds, so there’s no way to manage a shed as a shed. There For the landfill project, sheds crossed city lines, county lines, and state lines, and so communication, let alone coalition building, was very difficult. The landfill operator,  by contrast,  didn’t have to worry about sheds at all,  except as a “regulatory burden” to be gamed. The landfill operator didn’t need to worry about the colored sheds on their map at all, even their map even had them; they had property lines, and every political structure in the state is and was optimized to manage property as property.*** Hence –at least in the beginning — whatever the landfill operator wanted went  through the permitting and political process slick as a whistle; it’s not just corruption, it’s that everything is optimized for lines, and nothing for the sheds! (having beaten Garrett Hardin like a gong).

Perhaps this is utopian, but it feels to me that we will never, er, save the planet from climate change and a host of other ills that come from human stressors on the environment**** unless we have property and political jurisdictions that map much better to sheds. Why, for example, am I not a citizen of the Penobscot River Basin, as well as (zooming in, fractal style) a citizen of the the Orono Bog, and (zooming out) the Gulf of Maine. (Or, zooming way out, a citizen of the Atlantic? Or the planet?) Would it be possible to govern those watersheds democratically? Why not? Elinor Ostrum describes criteria for successful collective action when managing commons:

In comparing the communities, Ostrom found that groups that are able to organize and govern their behavior successfully are marked by the some basic design principles:

Are there already, somewhere in the world, jurisdictions matched to commons governed according to this design? Where? Why or why not?

How do we — for some definition of “we” — decide what is turning the leaves of our trees brown and malevolent and wrecking our viewshed, our commons, and then what do we do? Will current institutional arrangements enable us to act quickly and effectively enough? Or will Ostrum’s thinking scale globally, given that this fragile earth, our island home is, after all, a commons?

Thinking out loud more than being rigorous and disciplined, but thoughts like these have been on my mind for a long time….

NOTE * “Shed” could be from the Middle English shadde, perhaps a variant of shade; so a shed would be an area out of the sun!

NOTE ** Another way of saying this is that the people of Maine were not permitted to manage the landfill as a commons, as Elinor Ostrum would suggest (having beaten Garrett Hardin like a gong).

NOTE *** I think I’m still a propertarian as Shevek of The Dispossesed would understand the term (as is much of today’s “emerging” left, rightly or wrongly). But I wish there were a better way to integrate the commons with the property; code enforcement and suing each other seems a little limited.

NOTE **** We better not tick off the global mycelial mats too badly, or they’ll work out a way to smite us!