Just because a taboo has been broken does not necessarily mean that more radical action is in the offing. But the flip side is that, while we’ve been busy following debt ceiling and budget hijinx in the US, there are some surprising developments on the other side of the pond. One is that, as anti-Euro candidate Marine Le Pen is leading in polls in France, respected members of its ruling bureaucracy are deeming the Euro as a failed experiment and presenting detailed plans as to how an breakup could be executed.

Mind you, the Eurozone has been limping from crisis to crisis for so long that it’s hard to take new signs of trouble seriously. And the latest sighting, the publication of La Fin du Rêve Européen (The end of the European dream) by François Heisbourg describes the euro as a cancer imperiling the European Union, has more symbolic than practical importance. But it does mean that the idea of leaving the eurozone is no longer relegated to the lunatic fringe in France, one of the cornerstones of the currency union. In addition, there are are more credible proposals being floated for how to effect a dissolutions.

Ambrose Evans-Pritchard of the Telegraph, who provides a detailed write-up of the Heisbourg plan, is not wild about it, particularly since Heisbourg calls for a second go at a monetary union in ten years after Eurozone members have put the needed Federal architecture in place. After an ugly breakup, it’s hard to see how citizens can be rallied to take up an initiative that failed a second time.

There is one reason to pay attention to the French divorce talk: it’s a sign of festering political discontent with Germany. And remember, the French-German alliance is the backbone of the eurozone. Evans-Pritchard tells up:

Reading between the lines, he seems to have been shocked into writing this book by Germany’s role in the Libyan crisis, its refusal to provide transport planes (a routine courtesy for Nato allies) to help France “stop another Srebrenica massacre” in Benghazi, even after intervention had been approved by the UN Security Council and the Arab League.

The splendid Joschka Fischer called Germany’s decision to line up with Russia and China “a scandalous mistake,” warning that Germany risked waking up one day to find itself in “a very precarious position” if it continued to play this game.

You can perhaps read too much into the Libya episode, but the Franco-German body language has not improved much over Syria. Or as my esteemed Telegraph colleague Con Coughlin puts it: that Germany’s default position is now pro-Moscow.

You might conclude – though Prof Heisbourg does not go so far – that Germany is no longer an ally of France in any meaningful sense in defence and foreign policy (or indeed trade), and if so that has shattering implications. You might even conclude that the EU is already dead, an empty shell.

Heisbourg also reminds reader of how grim the fundamentals are:

Prof Heisbourg does not accept the latest claim by the EMU Gang of Five that Euroland has turned the corner, or that crisis policies are “beginning to deliver results.”…

He calls it a “cancer in remission”. The attempt to cut debt by fiscal austerity – rather letting growth erode the burden over time, a l’Americaine – and to do so without monetary stimulus, has been the “fatal choice”. The debt ratios are punching higher, towards the point of “non-linear rupture”.

Depression and mass unemployment in southern Europe is not a stable equilibrium…Starkly different narratives of the crisis are emerging among creditor and deficit states, which he compares to the split in attitudes after World War One when twisted views fed an ideological backlash….

The current course will lead to “serial crises ending in a nervous breakdown and an uncontrolled disintegration of the euro with all its consequences” – he writes – invoking a direct parallel with the sudden unravelling of the Soviet Union, a denouement with which he was closely associated and which caught almost everybody by surprise.

There’s a tendency, particularly in recent years, to discount the political component of economic crisis, particularly since the recent record is that government officials eventually prostrate themselves before the Bond Gods. The hated TARP was eventually passed. The US debt ceiling was increased, with altogether more high drama than international observers thought was necessary. The Trokia has repeatedly stumbled through crises and debt restructurings.

Yet these patch-ups are still fraught, and every time the principals come to the table, it seems that tempers and trust are wearing more and more thin.

It no doubt will seem like an extreme comparison, but I keep thinking about the set of circumstances that led to the collapse of Creditanstalt in 1931, which produced an international financial crisis and bank failures all across Europe. Mind you, I’m not predicting a Creditanstalt-type collapse, but to make the point that the trigger was political, not economic, and so it is important not to underestimate the possibility that political frictions can be the detonator for major financial dislocations.

I think it’s separately worth discussing this episode because it is a critically important bit of economic history that is still not well understood.

I’m attaching the best analysis I’ve seen of Creditanstalt failure, but will hazard to provide a relatively short summary:

1930: Germany is a complete mess. It’s 2-3 years into the Depression. Unemployment is high, people are hungry, and society is on the verge of breakdown in the hardest-hit areas.

President von Hindenberg offers Bruning of the Catholic party the Chancellorship. Hindenberg has emergency powers to rule by decree (although they could still be overruled in Parilament). He hasn’t allowed Bruning’s predecessor from the Social Democratic Party to use them. Bruning judged the key coalitions (the army, industrialists, landed aristocracy) and his own party as ready to move to the right. The government was continuing to run deficits (which were funded just about entirely internally). Bruning’s efforts to reach a budget agreement simply made everyone unhappy: the right wanted deeper cuts, the left thought where the burden fell was unfair (sound familiar).

Von Hindenberg and Bruning dissolved the government in September 1930. Oops! The Nazis made huge gains and became the #2 bloc in the Reichstag. Foreign investors freaked out. The mark fell and the central bank had to raise interest rates a full point.

Von Hindenberg had Bruning formed a new government. Despite the repudiation by voters, Mr. Market had temporarily cowed the opposition. Bruning reappointed his old cabinet and talked up austerity. The government was able to sell an international syndicated loan. Bruning talked up a plan to buy the government more breathing room by refinancing short-term government debt into longer maturities. Weak improvements in the domestic economy bolstered international confidence.

The Nazis left the Reichtsag in protest, giving Bruning more leeway and he was able to pass a budget. But possibly the biggest development of February 1931 was that the French signaled that they might make long term loans to Germany. France was the second largest creditor nation of the era. They had, not surprisingly, been taken aback by the September election. But the conservative French government fell in December and a more liberal and internationalist coalition took over. This vote of confidence was more important than the actual amount of money committed. The halting improvement in key economic figures and the change in French posture led to a rise in the stock market. The bond market rallied strongly for the first four months of 1931.

So why with Germany seeming to be starting to be on the mend, did everything come unravelled?

The article sets forth, in a meticulous way, that the collapse was not a classic bank run. Even weeks after the Creditanstalt failure, German deposits at its major banks that failed were at largely the same level. What did deteriorate was not demand deposits, but time deposits. The withdrawals thus weren’t to escape a bank collapse (although that’s what resulted), it was a run on the currency.

Von Hindenberg and Bruning, implausibly, were also implementing a right turn on the international front: 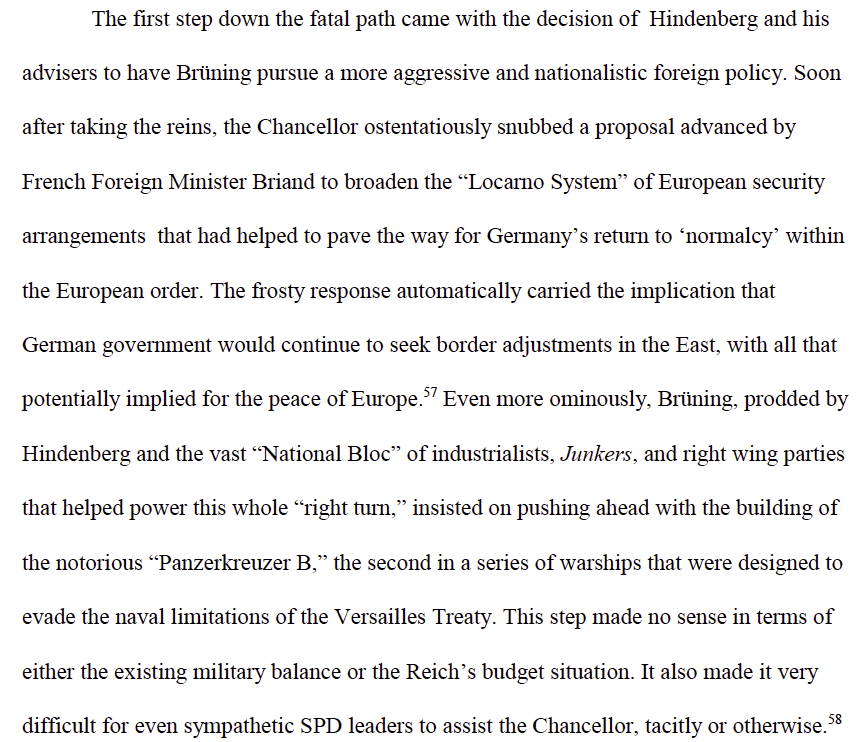 To make matters worse, the Parliament approved a plan for a customs union with Austria, which became public on March 21. This violated the spirit, and potentially the letter of the Versailles Treaty, which barred German and Austrian integration. France immediately threatened to stop lending to Germany.

Bruning was caught between the need to make even deeper budget cuts as the economy continued to deflate, and persuading the countries to which Germany owed reparations to provide relief in order to prevent social upheaval The French and resulting financial market reaction aborted the possibility of a long-term loan’ Bruning tried squeezing harder while engaging in an international charm offensive. But it was too late: 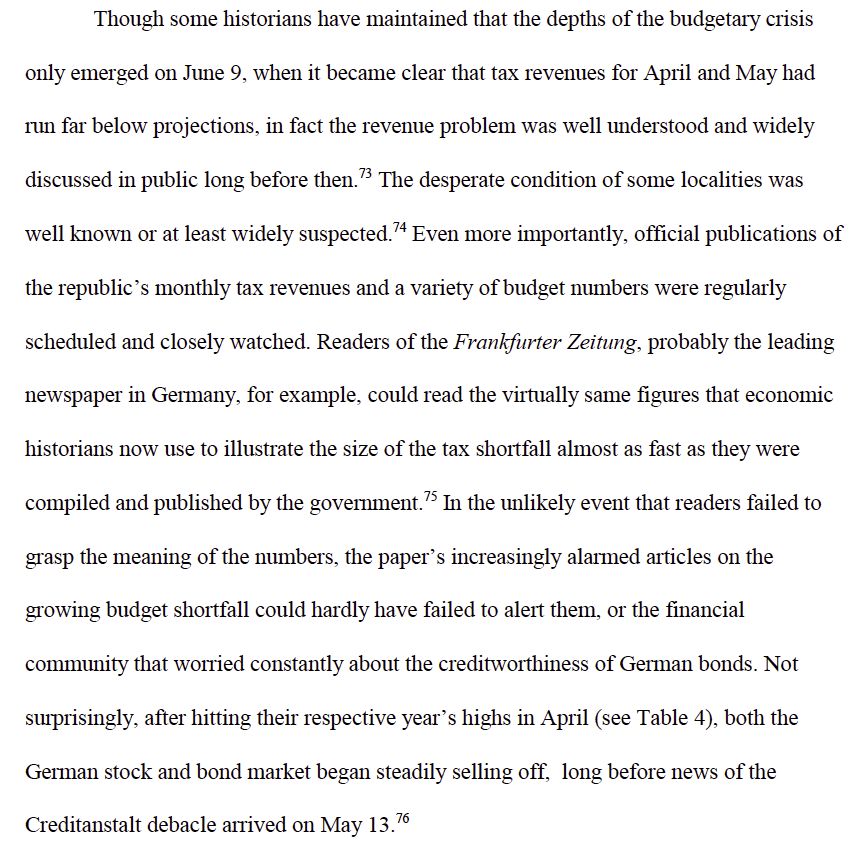 Bruning then attempted to work up a deal that would inflict enough additional pain on domestic constituencies to enable him to win some concessions on reparations. A domestic bond issue had failed before the Creditanstalt collapse, proof of deteriorating confidence. Talks over how to fill the budget gap were fraught.

Bruning repudiated reparation payments on June 6. The article details the further unraveling. And the real trigger was the final recognition that austerity would not work: “Underneath it all, however, ran the wrenching fear that the government could not make its colossal budget cuts stick.”

But the immediate trigger was the bone-headed, politically driven effort to prioritize military spending and poke a stick in the eyes of other European countries in the form of the customs union with Austria. This looked necessary from the perspective of domestic politics. Now Germany was such a basket case that the odds it could have limped though its mess are questionable. But the point is that the proximate cause of the European bank failures that delivered a huge blow to the global economy, was set off by political, not economic, events.

It now seems that any big upheaval as a result of the festering aftermath of the financial crisis is unlikely. But a Eurozone breakup would be hugely disruptive and very detrimental to growth. While the odds are not all that high, they are still higher than a mere tail event, and political tensions continue to escalate. It’s still more likely than not that the Eurozone will hang together, but the widely accepted idea that politicians know better than to defy the Bond Gods may prove to be unduly optimistic.

Ferguson/Temin: Made in Germany: The German Currency Crisis of July 1931