By Stephanie Kelton, Associate Professor and Chair of the Department of Economics at the University of Missouri-Kansas City. Cross posted from New Economic Perspectives

Many economists (perhaps even those who agree with us) refuse to talk about the national debt and government deficits the way we do on this blog. Instead of boldly challenging the assertion that the U.S. faces a long-run debt (or deficit) problem, headline progressives typically do what Jared Bernstein did in his column today — i.e. they pay “obligatory” tribute to the Balanced Budget Gods, thereby reinforcing the case for austerity at some point in the not-so-distant future when we will be forced to to deal with this very bad thing called the government deficit. Followers of my work here and on Twitter know that I refuse to pay homage to the Balanced Budget Gods. Instead, I prefer to shift the burden of proof onto those who contend that the U.S. faces a long-term debt or deficit problem. The first step is to establish that solvency can never be an issue for a government that spends, taxes and borrows in its own (non-convertible) currency. The following quote from the St. Louis Federal Reserve usually does the trick, but this great confession from Alan Greenspan also helps. 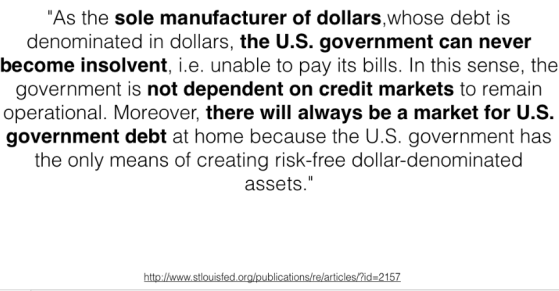 Greenspan’s response to Congressman Paul Ryan sets up the correct debate. Our challenge is not whether we can “afford” to make the payments we have promised to seniors, veterans, the disabled, government contractors, healthcare providers, bondholders, etc. (today, tomorrow and into the indefinite future) but whether we will be a productive enough nation to allow the government to make good on those promises without causing an inflation problem. That is the debate we should be having.

Of course, there are many other points that can be made about the role of the government deficit in our economy:

And so on.  I make all of these arguments when I give public talks on this subject, and the response is always the same: Why didn’t anyone tell us this before?

The lesson? It’s okay to deviate from the progressive talking points. In fact, it’s better than okay. People will thank you.  Want proof?  Here’s a typical response I received just hours ago. 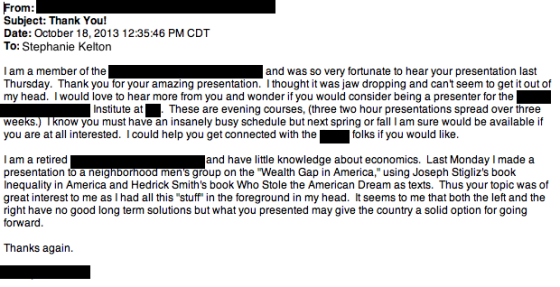 * Don’t Think of An Elephant is, of course, the title of George Lakoff’s brilliant book about messaging progressive values.