This is Naked Capitalism fundraising week. 564 donors have already invested in our efforts to shed light on the dark and seamy corners of finance. Join us and participate via our Tip Jar or another credit card portal, WePay in the right column, or read about why we’re doing this fundraiser and other ways to donate, such as by check, as well as our current goal, on our kickoff post. And read about our current target here.

On Thursday, a former bank examiner at the Federal Reserve Bank of New York, Carmen Segarra, filed a suit (embedded at the end of this post) against the New York Fed and several of its employees alleging, among other things, improper termination. The complaint is a doozy and some of the additional details supplied by Segarra to ProPublica make an already ugly picture look even worse.

Segarra was an experienced attorney who had spent her entire career working in banking in the corporate counsel’s office of large financial firms, most recently as a senior counsel at Citi. In other words, she is not a naif or a theoretician. She was hired as part of an effort to increase bank examination functions to meet Dodd Frank requirements. But Segarra wound up on a collision course with the old guard at the New York Fed, which is particularly deeply tied into Goldman. For instance, the current president, William Dudley, had been Goldman’s chief economist) and has a bias to protect rather than regulate financial firms. The senior officer responsible for Goldman at the New York Fed was called a “relationship manager.” No, I am not making that up.

Segarra was tasked to assess whether Goldman’s conflicts of interest policies were adequate in three separate cases: Solyndra, the El Paso/Morgan Kindler acquisition, and a bank acquisition by Sandanter. What is stunning if you read the complaint, which we’ve embedded below, is how high-handed Goldman was in its responses to Segarra’s inquiries. It’s not hard to imagine that they viewed this as a pro forma exercise that given their cozy relationship with the New York Fed, would go nowhere. They didn’t just stonewall, they told egregious lies. That sort of cover-up usually winds up being worse than the crime, but not if you are in a privileged class like Goldman. When Segarra (and initially, the other members of her team) kept pressing Goldman for answers and making clear that what they were getting was problematic, Goldman then started giving credulity-straining responses.

As the exam moved forward, Segarra came under pressure from the Goldman relationship manager, Michael Silva, who was also senior to her at the bank (this is how you can tell the new regulatory push is all optics: the examiners are subordinate to the established “don’t ruffle the banks” incumbents). Silva, who had been chief of staff to Geithner before becoming “relationship manager” to Goldman, appears, unlike Segarra, not to have had real world financial services experience (he looks to have joined the New York Fed as a law clerk in 1992 and stayed with the bank).

Segarra was fired abruptly after refusing to change her recommendations and destroy supporting documents, which was in violation of regulatory policy (bank examiners are not “fire at will” employees; they need to be put on notice and given the opportunity to correct deficiencies in their performance before they can be dismissed).

I’ve read other wrongful termination suits and Segarra’s looks very strong. It’s going to be awfully hard for the New York Fed to talk its way out of this one.

What is particularly damning for the Fed and Goldman is Goldman’s intransigence during the examination process and the howlers the New York Fed staffers used to justify treating the bank with kid gloves. The complaint is short and readable, but for your convenience, I’ll extract some of the really juicy bits.

The bone of contention is that bank regulations required Goldman to have a firm-wide conflicts of interest program. The reason that it needs to be firm wide is that letting business units have influence or worse, control over compliance issues is putting the foxes in charge of the henhouse. JP Morgan had risk control for its CIO unit located in the CIO, not the bank, level. It should be no surprise that a fiasco like the London Whale was the result.

Goldman blew off Segarra’s first document request. When asked about it (before Goldman realized someone at the Fed was actually taking the matter seriously), the bank said on separate occasions that it had no firm wide conflicts of interest program.

And when Goldman finally started producing documents, things got uglier: 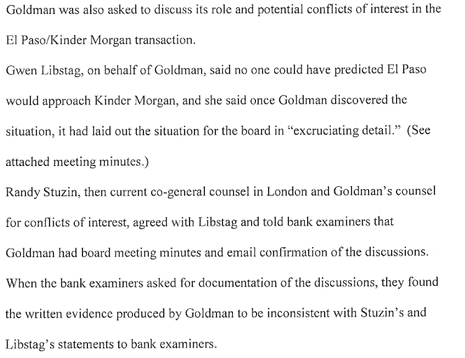 The ProPublica account adds more details based on its interviews:

The discussion turned to the name of the group that oversaw conflicts at Goldman: “Business Selection and Conflicts Resolution Group.” Segarra’s supervisor, Johnathon Kim, asked if business selection and conflicts were, in fact, two different groups. He was told they were not, the minutes show.

Goldman officials stated that the bank did not have a company-wide conflict-of-interest program, Segarra’s minutes show. Moreover, the head of the business selection and conflicts group, Gwen Libstag, who is not a lawyer, said in a subsequent meeting on Dec. 8 that she did not consider what her staff did a “legal and compliance function,” according to Segarra’s minutes.

“That’s why it’s called business selection,” another Goldman executive added. “They do both.”

Given the Fed’s requirements, the regulators were stunned, Segarra recounted in an interview. “Our eyes were open like saucers,” she said. “Business selection is about how you get the deal done. Conflicts of interest acknowledge that there are deals you cannot do.”

So when Goldman is caught with its pants down, what does the New York Fed top brass do? Silva starts making over-the-top claims that the sky will fall in on Goldman (and therefore the financial system!) if this information isn’t suppressed: 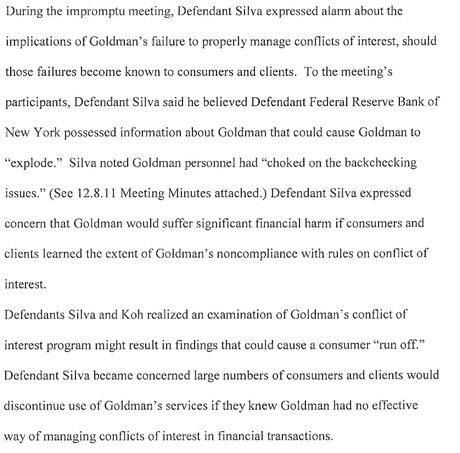 This is just an insult to the intelligence of anyone who has been awake during the crisis. Goldman was raked over the coals in the media in 2010, first when the SEC filed its suit in April on one of its Abacus CDOs, and later when Carl Levin turned the spotlight on other particularly noxious Goldman CDOs, such as Timberwolf and Hudson. Yet even though Goldman’s reputation suffered and its stock price took a hit, it did not suffer if any loss of customer business. A lot of that is ego: most clients think they are smart enough to protect themselves from the likes of Goldman. Others say that even with its double-dealing, it still offers services other don’t. For example, if you are a hedgie and for some reason really want to do a trade in August in the late afternoon on a Friday, you’ll have trouble scaring up anyone you’d trust to take your order at most shops. By contrast, Goldman makes sure to have all the desks covered.

Oh, and after this meeting, Segarra started getting requests from staff affiliated with Silva to alter, and later, destroy meeting notes and other records.

Given that Goldman staff had no compunctions about lying, it should come as no surprise that the bank withheld other important information. Segarra and her colleagues were stunned when Judge Leo Strine issued a blistering ruling on shareholder litigation for the El Paso/Kindler Morgan merger. Among other things, he criticized Goldman for not informing El Paso that its lead Goldman banker who was supposedly on its side had an undisclosed $340,000 personal stake Kindler Morgan, meaning he had a strong personal incentive to get El Paso to accept a lower price. Not only was this news to Segarra, when it shouldn’t have been. She developed a long list of questions with the New York banking regulator to ask Goldman at a meeting scheduled between Goldman and various regulators, including the SEC. Silva then barred Segarra from asking any questions about El Paso/Kindler Morgan but the SEC went over some of the issues that concerned her. She inferred how Goldman thought it could justify this misconduct:

Segarra also ascertained that Goldman had misrepresented that the New York Fed had approved the Sandanter deal (it needed to be reviewed for anti-money laundering compliance). Again, the New York Fed staff tried waving her off, telling her Goldman made this sort of misrepresentation “all the time” (meaning the Fed is complicit) and that it was moot because the deal had closed (so is robbing a bank also moot when the hit man successfully makes off with the dough?). Segarra was told not to discuss the matter internally, even with the Fed’s legal staff. And the reason? As Johnathon Kim, her immediate boss, said, “Because I told you so. For your protection.”

Mind you, this is only a partial description of the extent of the stonewalling and internal sabotage that Segarrra faced. If you read the account at the New York Times’s Dealbook, you get only a watered-down version of the allegations and a whisper campaign from the New York Fed, with unnamed sources accusing Sagarra of being subject to “conspiracy theories”. Admittedly, any smart litigant will save its response for the courtroom, but the sad part is that the New York Fed may be so deeply captured by the banks that anyone who is serious about looking into possible misconduct must be crazy. After all, banks like Goldman have good intentions and anything that looks like misconduct is just an honest misunderstanding.

But there’s one mention in the complaint (numbered para 74) which is the linchpin as to why the examination regime is so diseased. Goldman (which does not hesitate to make threats) threatened it would “waive privilege” if Segarra kept being so inquisitive. I don’t think this is exactly what Silva meant to convey, since my reading is that only the bank examiner or regulator can waive privilege. So what I read this threat as saying that if the Fed persisted, Goldman would not longer operate as if future communications on the El Paso/Kindler Morgan matter were privileged, ie, it would act as if the New York Fed were a hostile outside party who would need to compel document production and further responses to questions via subpoena.

Now if we lived in a world where regulators had any guts or power, the New York Fed would have some ready counterthreats. For instance, in Japan, firms (it was always the foreigners, the Japanese banks knew better) that tried defying the Ministry of Finance would be subject to an ongoing MOF audit until they complied. A MOF audit was so painful (MOF staff would descend on the banks’s offices and seal files, among other things), that they would capitulate quickly. Untimately, the Fed controls access to the large payments system on which all large financial firms depend. If a bank wanted to play hardball and defy examination efforts, which is what Goldman was doing, the Fed could have a scale of escalating charges for certain types of unresolved compliance issues. No one would need to know unless the charges hit some level of public reporting materiality, which for a bank as large as Goldman would be pretty large. But if nothing else, it would allow the Fed to hire either more internal or outside counsel for any real staredowns.

But since we don’t do tough-minded regulation in the US in the US, even trying to implement a sensible regime like that would elicit all sorts of howls and legal arguments. The sad reality is once weak regulation becomes normal, it’s very hard to turn the clock back. Since the near destruction of the global economy wasn’t enough to produce a sea change, it’s hard to imagine what could.