When Blackstone’s global head of private equity, Joseph Baratta, said Thursday night that “we” were “in the middle of an epic credit bubble,” the likes of which he hadn’t seen in his career, he knew whereof he spoke.

Junk bond issuance hit an all-time record of $47.6 billion in September, edging out the prior record, set in September last year, of $46.8 billion, according to S&P Capital IQ/LCD. Year to date, issuance amounted to $255 billion, blowing away last year’s volume for this period of $243 billion. The year 2012, already in a bubble, set an all-time record with $346 billion. This year, if the Fed keeps the money flowing and forgets about that taper business, junk bond issuance will beat that record handily.

Junk-bond funds got clobbered in July and August as retail investors briefly opened their eyes and realized what they had on their hands and fled, and they went looking for yield elsewhere, but there was still no yield in reasonable places, and so they held their noses and picked up these reeking junk-bond funds again. Cash inflow doubled over the last week to $3.1 billion, the most in ten weeks.

These retail investors were fired up by the Fed’s refusal to taper even a little bit, giving rise to the hope that it might actually never taper, that this is truly QE Infinity, Wall Street’s wet dream come true – on the theory that the Fed is mortally afraid that any taper would blow over the sky-high financial-markets house of cards it has constructed over the last five years. And the retail cash returned to these junk-bond funds and just about refilled the hole that had been dug during the summer.

“The cost of a high-yield bond on an absolute coupon basis is as low as it’s ever been,” explained Baratta, king of Blackstone’s $53 billion in private equity assets. Even the riskiest companies are selling the riskiest bonds at low yields. The September frenzy hit the upper end too and set a new record: companies sold $145.7 billion in investment-grade bonds in the US. And Baratta complained that valuations “relative to the growth prospects are out of whack right now.”

These “growth prospects” look grim, with corporate revenues barely keeping up with inflation, and with earnings growth, despite all-out financial engineering, getting decimated. On October 1 last year, earnings estimates for the third quarter 2013 still saw a growth of 15.9%. As of Friday, estimated earnings growth had plunged to 4.6%, dropping 20 basis points per week in August and 10 basis points per week in September. And they may still be too optimistic.

Meanwhile, earnings growth estimates for the fourth quarter have barely budged since August and remain at the deliriously lofty level of 11.1%, pulled up largely by financials, whose earnings growth is still pegged at a breath-taking 25.7%, based on the assumption that the Fed will continue to feed them. 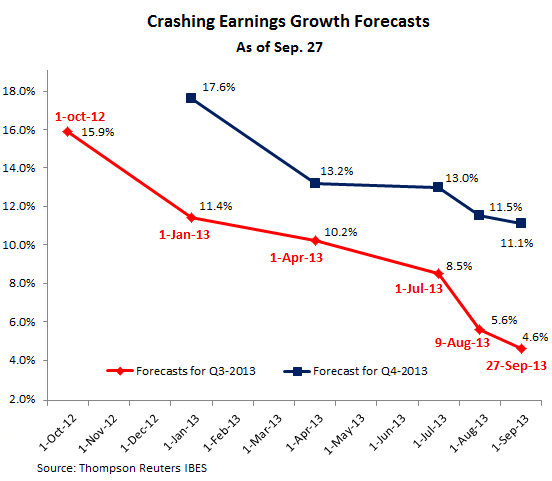 But financials are having some, let’s say, issues. The five biggest banks alone face a $1 billion cut in earnings from just the past month, based on a big decline in fixed-income trading revenues – with our special friend, JPMorgan, eating more than half of it. There had been “hopes of a final trading flurry in the last few weeks of the quarter,” the FT observed, but those hopes have now been squashed.

Then there is the death of the mortgage refi bubble that has been hammering banks, with number one mortgage lender Wells Fargo suffering the most. Four banks have so far announced 7,000 layoffs in their mortgage divisions. JPMorgan confessed that it would lose money in its mortgage business in the second half. On top of that, JPMorgan is contemplating $11 billion in legal settlements for its various mortgage scams. And earnings at financials are still expected to grow 25.7% in the fourth quarter?

“Out of whack” is what Baratta called this phenomenon of sky-high valuations in relationship to grim growth prospects.

Earnings estimates have been slow in coming down. And the stock market, supposedly forward looking and focused on corporate revenues and earnings, has been completely blind to them. It follows the mantra that fundamentals no longer matter. All that matters is the Fed. A shift that has become the Fed’s most glorious accomplishment. And the Fed continues to feed Wall Street with $85 billion a month.

Yet in this glorious environment where there is no gravity for stocks and even junk bonds, the smart money is selling hand over fist, unloading whatever they can, however they can. Record junk bond issuance is just one aspect. Another aspect: IPOs. They have gone haywire.

There were 23 IPOs in May, 20 in June, 17 in July (Independence Day put a damper on it), 19 in August, and 21 in September. But last week alone, there were 12 IPOs – more than two per day! Generally, IPOs are scheduled apart to avoid overloading the market. But now the smart money is scrambling to issue paper while it still can and stuff it into the portfolios of retail investors at current “out of whack” valuations, stocks and bonds alike, before the Fed turns off its crazy money spigot, and before investors will finally open their eyes to the grim earnings reality.

Why would anyone buy this crap? No, not the clothes in J.C. Penny’s stores – which practically no one is buying – but the shares it sold on Friday. It desperately needed to raise capital because it’s bleeding cash and won’t be around much longer without lots of new cash to bleed. So it did. At a horrendous expense, overnight, to existing stockholders, and at a steep loss for the new ones.