If a bad job market wasn’t damaging enough, the cost of paying off student loans does much more harm to the long-term prospects of young people than is commonly realized.

Bill H at Angry Bear has been having a long-running argument over a dubious effort by the CBO to cook the books yet again (we’ve covered past efforts: for a partial list, see here here, here, and here). He’s been criticizing the CBO (correctly) for changing its valuation method for student loans to something called Fair Market Valuation. Bill H contends the new approach is bunk. Currently, because borrowers can’t escape student loans, servicers collect $1.22 on the $1 when a loan goes into default. But perversely, the “Fair Market Valuation” method anticipates that loans going into default result in losses. That’s awfully convenient, since it justifies charging higher interest rates. As Bill H argues by e-mail: :There is no history of government-backed student loans being risky and the cost is $.94 on each dolar loaned. A student loan is 99% inescapable.”

He continues that discussion in a current post, Ripping Off College Students’ Economic Future, and there is an additional part of his analysis that seldom gets much public attention, which namely is the lifetime cost of student loans. It’s much higher than you’d think, since the need to retire the debt means that young people start saving later, which means they buy house later (if ever) and accumulate less in the way of retirement assets. But the amount lost isn’t just the borrowings plus the interest payments. By not having savings early in their working life, they miss the effect of having them compound those extra years. That has a much bigger effect than you’d imagine.

I’ll start with his conclusion:

Are students being ripped off by government entitlement programs? Yes they are being ripped off; but, not by Social Security or Medicare as Stanley Druckenmiller suggests. Nor are student loans costing the federal government and tax payers as much as the recent analysis of student loans done by the CBO’s Douglas Elmendorf. In reality, the risk to the government and taxpayers comes from these students being less successful in accumulating wealth and increasing income which as DEMOS has suggested would cost $4 trillion is wealth alone. Unburdening students from a lifetime of student loan debt would benefit the economy.

Let’s look at how he gets there:

What is threatening the future wealth and income of college students is the increasing debt taken on by students seeking the education necessary to have a chance in a global economy where investments are seeking fewer labor intensive opportunities. The increased funding necessary to go to college is the result of decreased governmental funding of schools, declining or stagnant household incomes, financial strategies delineating the increased risk of student loans (CBO, The New America Foundation, Heritage Foundation, etc.), and the increased cost of attending colleges and universities (which as Alan Collinge of Student Loan Justice Org. states cost increases have outstripped CPI and even Healthcare).

Student Debt has quadrupled from 2003 to 2013 going from ~$240 billion to > $1,000,000,000. Up from 41% in 1989, 66% of all students now have an average debt of ~$27,000. The rise in average student debt can be traced to a sharp decline in state funding of public colleges of 25% since 2000 and a stagnation/decline of household income for the vast majority of US households over a similar time span. As Dr. Elizabeth Warren pointed out in “The Coming Collapse of the Middle Class” . . . where a high school diploma and a sound work ethic were once the ticket to into the middle class, the college education and a two incomes are now the surest way into the middle class….. As reflected in an August 2013 study by Demos “At What Cost” ; the amount of debt carried by student has not only increased, it also varies by amount of family income. 75% of all BA graduates coming from families with incomes < $60,000 have varying degrees of debt as compared to 48% of those coming from families with incomes >$100,000. 14% of all low income students leave with loan debt > $30,000 as compared to 9% of students coming from higher income families.

Yves here. So you can see how skyrocketing higher education costs and the use of student debt to enable it perpetuates income differences. Bill H points out that blacks are the group with the highest frequency of borrowing, Asian-Americans the lowest. Back to his post:

Young college educated students without student loan debt accumulate more retirement funds sooner, purchase homes sooner (more expensive homes at that), put down larger down payments, and paid lower interest rates. “Households with education debt, however, had higher average incomes than those without, which is consistent with other research on the incomes of young college-educated households.”. Much of that difference comes from the preponderance on getting a higher salary to offset the loan….

Burdened with student debt, a student can expect to lose lifetime wealth of ~$208,000 when compared to unburdened students. “’Nearly two-thirds of this loss comes from the lower retirement savings of the indebted household, while more than one-third ($70,000) comes from lower accumulated home equity; because of the two withdrawals from savings later in their lives, the liquid savings gap is just $4,000.’ In general, ‘it can be predicted a $1 trillion in outstanding student loan debt will lead to total lifetime wealth loss of $4 trillion for indebted households.’” 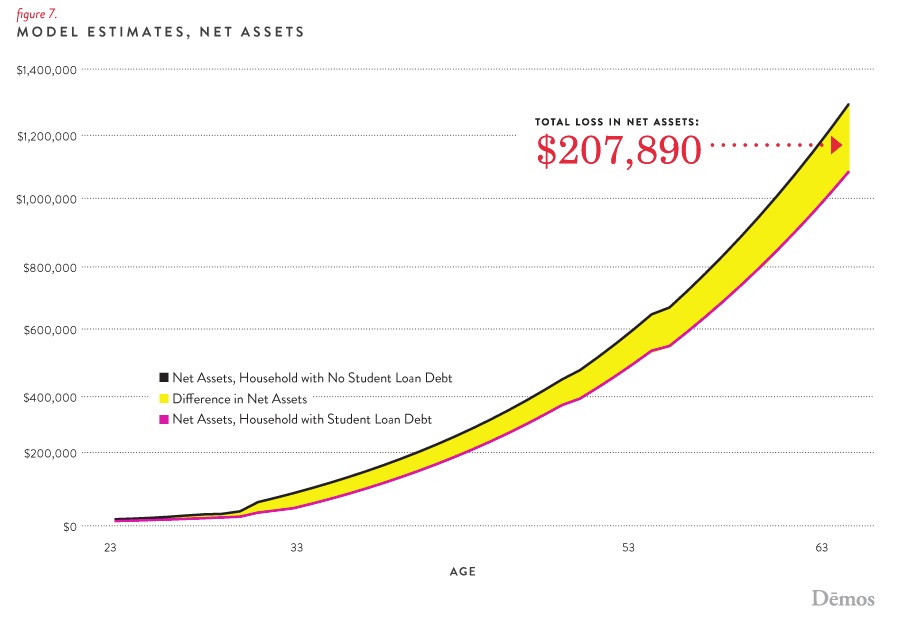 The biggest economic hurdle to young people is the raw deal they are getting with education and in the lousy job market. Bill H argues in the rest of his post that the argument by the CBO and the austerians that students can afford higher interest rates because they are “only a few dollars a month more a month” is inaccurate, since the advocates of squeezing young people harder underestimate how long the loans will be outstanding (in our new normal, new graduates are almost certain to have work interruptions, insuring that it takes them longer to pay off the debt, which in turn magnifies the impact of higher interest rates).

But the powers that be have found turning adults into debt slaves as early as possible to be a brilliant bit of social engineering, forcing the young to stay in line lest they mar their employment prospects. And as long as the powers that be continued to be successful in pitting the young against the old rather than against their common enemies, a predatory and extractive financial services industry and a super-wealthly class that prefers to mine rather than develop the countries in which they hold investments, it’s unlikely that either group will escape the grim future that the neofeudalists are in the process of creating.