Yves here. In some ways, I hate to be having such a run of Paul Krugman posts, but his stand on the TransPacific Partnership and his continued defense of dubious economic ideas that were long ago disproven, like loanable funds, in combination with his prominence, means the attention is well warranted.

Here Steve Keen elaborates on how Krugman is beginning to give ground on the loanable funds model. And for those not familiar with it, here’s a recap which explains the concept and why it’s relevant in policy discussions:

In really simple terms, there is a “loanable funds” market in which borrowers and savers meet to determine the price of lending. Keynes argued that investors could have a change in liquidity preferences, which is econ-speak for they get freaked out and run for safe havens, which in his day was to pull it out of the banking system entirely. [John] Hicks endeavored to show that the loanable funds and liquidity preferences theories were complementary, since he contended that Keynes ignored the bond market (loanable funds) while his predecessors ignored money markets.

But that’s a deliberate misreading. Keynes saw the driver as the change in the mood of capitalists; the shift in liquidity preferences was an effect. (In addition, Keynes held that changes with respect to existing portfolio positions, meaning stocks of held assets, would tend to swamp flow effects captured by loanable funds models.)

Making money cheaper is not going to make anyone want to take risk if they think the fundamental outlook is poor. Except for finance-intensive firms (which for the most part is limited to financial services industry incumbents), the cost of money is usually not the driver in business decisions, Market potential, the absolute level of commitment required, competitor dynamics and so on are what drive the decision; funding cost might be a brake. So the idea that making financing cheaper in and of itself is going to spur business activity is dubious, and it has been borne out in this crisis, where banks complain that the reason they are not lending is lack of demand from qualified borrowers. Surveys of small businesses, for instance, show that most have been pessimistic for quite some time.

If you want to put it in more technical terms, what is happening is a large and sustained fall in what Keynes called the marginal efficiency of capital. Companies are not reinvesting at a rate sufficient rate to sustain growth, let alone reduce unemployment. Rob Parenteau and I discussed the drivers of this phenomenon in a New York Times op-ed on the corporate savings glut last year: that managers and investors have short term incentives, and financial reform has done nothing to reverse them. Add to that that in a balance sheet recession, the private sector (both households and businesses) want to reduce debt, which is tantamount to saving. Lowering interest rates is not going to change that behavior. And if you try to generate inflation in this scenario, when individuals and companies are feeling stresses, all you do is reduce their real spending (and savings power) and further reduce demand (and hence economic activity).

By Steve Keen, Associate Professor of Economics & Finance at the University of Western Sydney and author of Debunking Economics and the blog Debtwatch. Originally published at Business Spectator

What a difference a year (and three-quarters) makes. Back in March of 2012, Paul Krugman rejected the argument I make that new debt creates additional demand:

“Keen then goes on to assert that lending is, by definition (at least as I understand it), an addition to aggregate demand. I guess I don’t get that at all. If I decide to cut back on my spending and stash the funds in a bank, which lends them out to someone else, this doesn’t have to represent a net increase in demand. Yes, in some (many) cases lending is associated with higher demand, because resources are being transferred to people with a higher propensity to spend; but Keen seems to be saying something else, and I’m not sure what. I think it has something to do with the notion that creating money = creating demand, but again that isn’t right in any model I understand.” (Minsky and Methodology (Wonkish), March 27, 2012)

Then earlier this month, this argument turned up in his musings about the secular stagnation hypothesis:

“Start with the point I’ve raised several times, and others have raised as well: underneath the apparent stability of the Great Moderation lurked a rapid rise in debt that is now being unwound … Debt was rising by around 2 per cent of GDP annually; that’s not going to happen in future, which a naïve calculation suggests means a reduction in demand, other things equal, of around 2 percent of GDP.” (Secular Stagnation Arithmetic, December 7, 2013)

Don’t get me wrong: I’m glad that Krugman may finally be starting to support the case that I (and some other endogenous money theorists like Michael Hudson and Dirk Bezemer) have been making for many years: that rising debt directly adds to aggregate demand. If he is, then welcome aboard. Though there’s doubt as to whether John Maynard Keynes ever uttered the words attributed to him that “when the facts change, I change my mind – what do you do sir?”, I’m happy to accept this shift in that spirit.

But I don’t want to see this change in analysis sneak under the radar either: it deserves acknowledgement as a major shift in the thinking of a major figure in contemporary economics.

It also calls for a theory in which this is possible: a theory in which an increase in debt causes a commensurate increase in demand. As Krugman put it himself back in March of 2012, the argument that rising debt directly adds to demand “has something to do with the notion that creating money = creating demand, but again that isn’t right in any model I understand.” And that’s true, because the model Krugman understood back then was the model of ‘loanable funds’, in which increasing debt can’t add much to aggregate demand, because debt simply transfers spending power from a lender to a borrower.

In a Loanable Funds universe, only if the lender is a miser and the borrower a spendthrift will demand rise all that much – and generally, mainstream economists downplay this possibility. As Ben Bernanke put it when he downplayed Irving Fisher’s Debt-Deflation Theory of Great Depressions, “Absent implausibly large differences in marginal spending propensities among the groups … pure redistributions should have no significant macro-economic effects…” (Essays on the Great Depression, 2000) And as Krugman himself put it just a year ago, “the overall level of debt makes no difference to aggregate net worth – one person’s liability is another person’s asset. It follows that the level of debt matters only if the distribution of net worth matters.” (End This Depression Now!, 2012)

Yet here we have Krugman suggesting that change in the aggregate level of debt matters in its own right, and proposing a one-for-one correspondence between the change in aggregate private debt and aggregate demand: “Debt was rising by around 2 per cent of GDP annually; that’s not going to happen in future, which a naïve calculation suggests means a reduction in demand, other things equal, of around 2 per cent of GDP.”

Have you heard the old joke that an economist is someone who, seeing that something works in practice, then says “Ah! But does it work in theory?”. I’m not going to pull that swifty here: as I noted last week, I see the role of debt adding to aggregate demand as an empirical reality that economists have to explain – not something that can’t exist unless economists have a model that explains it. But just as physics could only progress at the end of the 19th century after it had developed a model that explained the peculiar properties of ‘black-body’ radiation (see Figure 1), economics will only progress in the 21st if it can explain how and why an increase in debt adds to aggregate demand.

Figure 1: Classical physics agreed with experimental data only at very high or very low frequencies – it could not fit the actual data of black-body radiation. Planck’s quantum formula did fit the data, and overturned classical physics. 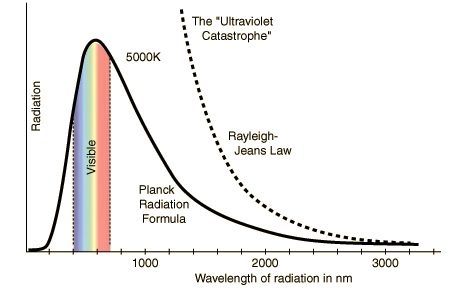 That requires abandoning the Loanable Funds model of lending, which treats banks as “mere intermediaries” and therefore ignores them in macroeconomics. To continue the physics analogy, I see Loanable Funds as a kindred spirit to the Classical Physics assumption that energy was infinitely divisible: if one goes (continuous energy for physics; Loanable Funds for economics), then so does the other (Maxwellian/Newtonian theory for Physics back then; the still dominant non-monetary approach to macroeconomics for economics today).

If the Loanable Funds theory of lending is correct, then rising debt can only tangentially cause an increase in demand (if the borrower spends more than the lender would have done); if on the other hand a change in debt adds roughly one for one to demand, then the Loanable Funds model can’t be right. In other words, Loanable Funds and the argument that macroeconomics can ignore private debt are ‘joined at the hip’: if one goes, then so must the other.

Krugman’s recent “naïve calculation” throws out the latter. Will he now also ditch the former? That would be a really big shift, because until now he has been the staunchest defender of Loanable Funds, and derisory of the alternative Endogenous Money model, in which banks play an essential role in macroeconomics. In a series of posts – “Minsky and Methodology”, “Banking Mysticism”, “Banking Mysticism, Continued”, “Commercial Banks as Creators of ‘Money’” to name a few – he has heaped ridicule both on the proposition that banks matter in macroeconomics, and on the people who make that case.

But if he does abandon Loanable Funds, then ‘all is forgiven’, because I’m convinced that the Neoclassical belief in Loanable Funds is the biggest barrier there is to the development of a realistic, monetary macroeconomics. If Krugman gives way on this belief, then maybe there’s hope that central banks and treasuries around the world will eventually do so too. They might finally start to develop economic policies that reduce the problems caused by the crisis, rather than making them worse.

I’ll have more to say on this topic in coming weeks – including a ‘Post-Keynesian’ model of mine that shows how bank lending adds to aggregate demand, and comments on Nick Rowe’s “Neoclassical” explanation of the same phenomenon. But for now I’ll end with an important correction of Krugman’s “naïve calculation”, since he only considered household debt to banks. He should have included corporate debt as well, and the sum of household and non-financial corporate debt to banks grew 3.6 per cent faster than nominal GDP for the decade before 2008 (see Figure 2).

Figure 2: The gap between growth in nominal private debt and nominal GDP since 1990. 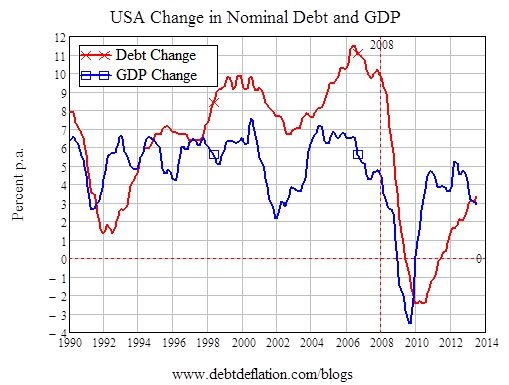 Put that growth in private debt as a percentage of GDP as Krugman did (which is also my preferred measure), and there’s not merely a 2 per cent of GDP gap to fill, but something closer to 12 per cent (see Figure 3).

Figure 3: Change in private debt as percentage of GDP and real GDP growth since 1990. 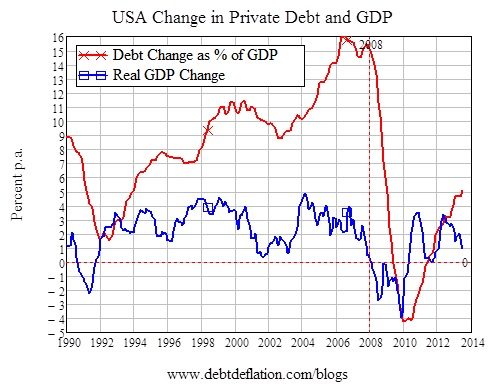 That’s a hell of a big gap to fill. But please, let’s not fill it with yet more bubbles.