In the immediate aftermath of the financial crisis, most European governments allowed the automatic stabilisers to kick in and implemented some mild discretionary measures, despite the strictures of the Stability and Growth Pact (SGP). But it was not long before the siren calls for “fiscal consolidation” arose, spurred on by spurious claims of “expansionary fiscal consolidation” and the now discredited claims that debt ratios threatened the economy. This has been followed by claims that it was failures to constrain budget deficits in the mid 2000s, which were to blame for the debt crisis and which placed limits on the ability of governments to respond to the Great Recession. Within the eurozone, fingers were pointed at the failures of the SGP, which had been intended to keep national budget deficits below 3% of GDP at all times, to have budgets which balanced over the business cycle, and to keep debt-to-GDP ratios below 60%. In the years 2002 to 2007, budget deficits averaged around 2% of GDP, the 3% limit was breached on numerous occasions, and, even in 2007, seven countries (of the then 12 members) had debt ratios of over 60%.

The SGP was slightly modified in 2005—though not to any great effect. The budget deficit conditions had been broken in 2004, when France and Germany broke the 3% limit without penalty and then Portugal broke the limit and was punished. But countries persisted in breaking the terms of the SGP (and the debt ratio was persistently breached). In light of these experiences, the European leaders decided at meeting in December 8-9, 2011, to adopt tighter rules on budget deficits and stricter enforcement of those rules. The “fiscal compact” rules are now embedded in the inter-government Treaty on Stability, Coordination and Governance, with the budget rules written into national constitutions or equivalent. The deficit rule becomes “balanced structural budget,” that is, a budget which is balanced (actually less than 0.5%of GDP) when the economy is operating at potential output—alternatively expressed as a zero output gap. There is a further deflationary twist with the addition of “excess deficit procedure” to force governments with debt ratios of over 60% to run surpluses. There is a requirement for the submission of national budgets to the European Commission, which will have the power to request that they be revised. The underlying rationale appears to be that governments are profligate, running deficits for the hell of it, and have to be contained. But there is a quite different reason—governments often run budget deficits because they have to secure a reasonable level of demand. This is not the case for all governments, but it is for the majority. If budget deficits came from government profligacy it would be observed that the private sector was being “crowded out” and the economy overheating. There was precious little evidence of that.

Clearly, this treaty reflects the notion that the euro crisis was due to fiscal indiscipline; consequently, more discipline is the only solution. Such a principle is clearly misleading. There is no justification for a balanced budget requirement, which poses restrictions in the use of fiscal policy in the face of economic crises. There are already signs that countries are not able to meet the targets set to move towards the limits of the “fiscal compact.”

Countries differ substantially in terms of their balance between private savings and private investment (see Figure 1) and their current account position (see Figure 2). There is a basic requirement that: budget position + private investment – private savings + current account position sum to zero. If the second and third differ across countries, then necessarily the budget position must differ. It does not make much sense to impose the same budget deficit requirements on each country when there are these differences. 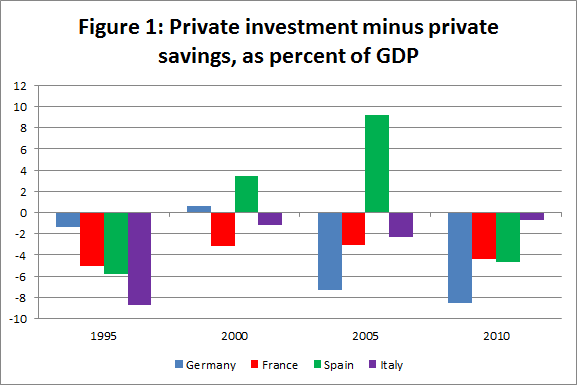 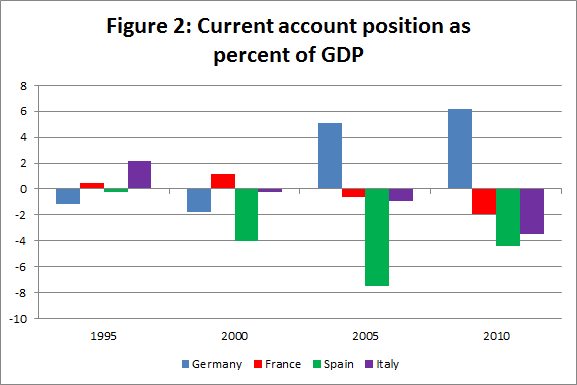 A balanced budget requires that private savings minus private investment plus current account deficit ( = capital account surplus) sum to zero. There is little reason to think that such a relationship is compatible with economy operating at potential output—let alone at full employment. Attempts to achieve a balanced structural budget without actions which will raise investment, lower savings, and promote net exports are doomed. The pursuit of balanced budgets will involve cutting public expenditure and raising taxes; it will not achieve the target and will involve misery along the way.

How long will it take until the Eurozone authorities and countries recognize that the conditions of the “fiscal compact” are unattainable in the sense that—whilst some countries are able to have a budget balanced at “potential output”—most cannot? Continuing to insist that fiscal austerity be pursued to balance budgets will bring misery. But now that the structural balanced budget requirement is written into national constitutions with penalties for failure to do, how will the counties signed up to the Treaty wriggle out of those commitments?