By Rumplestatskin, a professional economist with a background in property development, environmental economics research and economic regulation. Follow him on Twitter @rumplestatskin. Cross posted from MacroBusiness 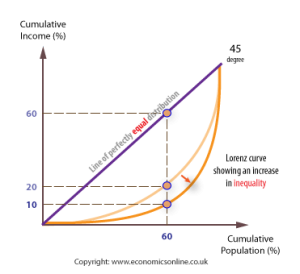 As my online debates with ‘well-trained’ economists continue with full force I will again use this blog as an outlet to expand on arguments that can’t be made in 140 characters or less, or those that simply attract religiously-held views via comment pages.

On Facebook an otherwise innocuous comment, that it is “undeniable there is an equity-efficiency tradeoff” really leapt off the screen at me. Why would a sophisticated economic analyst make such a strong statement that has little to no empirical support. Could it be that this little book has had such an enduring impact on the discipline?

What is rarely taught in the haste for economics departments across the Anglosphere to pump out energetic graduates are the numerous build-in assumptions of the core models that lead to this apparent trade-off. Nor are alternative models presented that parcel together different, and often more realistic assumptions, and arrive at far different conclusions.

In simple terms, the reason such a trade-off exists in economic models is because it is assumed that society is already at the production frontier and that any efficiency-increasing policy has already been undertaken. It’s a bit like saying once there are no win-win policies for equality and efficiency left, then there become a trade-off between them. Well, obviously. But that’s not real life, and we know that as soon as we leave this theoretical frontier almost anything goes (the theory of the second best).

To be more concrete, if there really is a real life equality-efficiency trade-off at a broad level, then there should be no single regulatory change that can increase both equality and efficiency, since if there exists such a reform, or set of reforms, it negates the entire aggregation to a macro level trade-off. Nor should you be able to simultaneous decrease efficiency and equality, as this leaves the door open for reversals of such policies.

Now one might interject at this point and say that the shifting nature of equality is a product of technology change, education or some other such thing. I’ll leave it to Matt Bruenig to address this point

The last few decades of median income stagnation didn’t have to happen. Even if you say it was caused by international competition or technological change or whatever else, the point is that if we had put a different set of distributive institutions into place, we could have avoided the maldistribution of income that we have seen. It is not like the median incomes stagnated because the economy as a whole stagnated. Quite the contrary: the economy is much larger on a per capita basis now than it used to be. If we had wanted to make sure median incomes continued to rise, we could have done that. We would have just needed different distribution policy.

Let us now consider a couple of important cases in the set of reforms that, by most estimates, would increase both equality and efficiency.

First is shifting the tax base to land (and other resource monopolies). This is probably the simplest in terms of administrative simplicity, and the one reform that would have the greatest efficiency boost and equality gains. Unfortunately it is also the one reform that, by virtue of its distributional impact, is the least palatable to the wealthy and therefore the least palatable politically.

The reason for the win-win nature of land taxes is that deadweight losses from taxation are reduced, increasing efficiency, while at the same time the tax will fall on those entities with the largest ownership claims to the natural wealth of a country.

The second case is actually any of a suite of investments that can be undertaken by government which would benefit the poor to at a higher proportion than their wealth. I’m thinking here of, say investment in a fibre optic communications network to all homes, or public investments in parks and community services in poorer neighbourhoods, or any number of things. These investments would then be provided free of charge or at token prices.

The policy space is vast, and economic thinking often limits it. Consider the case of gifts of land and accessible government-backed construction finance to households on low incomes. Such a scheme would provide the poorest in society an asset they can use to support themselves – to borrow against, to invest in, as a cushion in times of financial distress. We did it once before, with the soldier resettlement programs, for slightly different reasons.

In the case of Australia I might even suggest intervening in currency markets to keep the AUD low and foster local investment.

That’s a nice handful of policy ideas that appear to negate the apparent ubiquitous equality-efficiency trade-off.

I can’t provide a complete answer to these questions now. I can only do my part to expand the thinking of receptive readers of this blog.