Emerging markets-related disruption continued overnight, as the Nikkei fell nearly 2%, pounded by the rise in the yen due to its status as a flight currency. Other Asian markets took a hit as well, with only Australia emerging relatively unscathed: 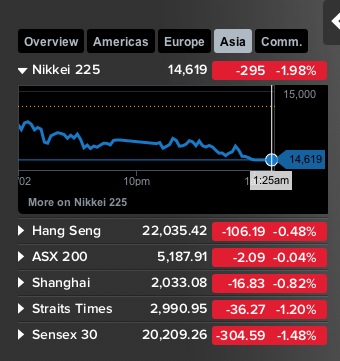 And the stress is unlikely to abate any time soon. Despite South Africa, Argentina, and Turkey having moved up interest rates to defend their currencies, theirs and other emerging markets still have their interest rates now looking too low in real terms. That puts the leaders of these countries in a no-win situation: let their currencies fall sharply, precipitating self-reinforcing capital flight, draining FX reserves, and stoking domestic inflation (worst, in food and fuel, which hit the poor and low income the hardest, increasing the risk of revolt) or raising interest rates, which is likely to trigger a slowdown, likely a full-blown recession. Here’s the underlying problem per Bloomberg:

Inflation-adjusted interest rates are still too low in developing nations for Citigroup Inc. and Goldman Sachs Group Inc. to foresee an end to the worst emerging-market currency selloff in five years.

One-year borrowing costs in Turkey are 3.6 percent, less than half of the average in the three years before the 2008 global financial crisis, even after the central bank doubled its benchmark rate last week, according to data compiled by Bloomberg. The real yield for Mexico is almost zero, while South Africa’s is 1.4 percent, compared with an average of 2 percent over the past decade.

One-year real yields in developing economies, based on the difference between interest-rate swaps and consumer-price inflation, are about 1 percent, according to Goldman Sachs. While rising, the rates are lower than the average of about 2 percent from 2004 to 2013, a model at the New York-based bank shows.

Even though the euro weakened this morning on the talk of a third bailout for Greece, and analysts now say it could fall further, from its current level of 1.35 to 1.30 versus the dollar, that still pales in comparison to the decline in emerging markets currencies such as the Turkish lira. And those moves are already having a detrimental impact in the weakest Eurozone countries. As the Financial Times’ Wolfgang Munchau informs us:

Start with the direct effect of the Turkish crisis on Greece and Cyprus. The magnitude is not that great on a global scale, but significant for the two countries. Their main industry – tourism – is competing head-on with Turkey. The Greeks and Cypriots have gone through incredible pains to improve their competitive position through wage and price cuts. The recovery in tourism is one of the few bright spots in their still depressed economies. The devaluation of the Turkish lira has put paid to all of this. Any holiday-maker headed for the eastern Mediterranean will find Turkey a lot cheaper. It is a game Greece and Cyprus cannot win.

And Munchau thinks the EM crisis could push the Eurozone, which is on the verge of debt deflation, over the brink:

For the eurozone as a whole, the main problem is not trade because it has a moderately large trade surplus. Instead, the problem is the impact on the price level. Eurostat, the EU’s statistics office, estimates that core inflation was 0.8 per cent in January….

At 0.8 per cent we are not far from outright deflation. A single large shock may be all that is needed. What is happening in Turkey and Argentina may constitute such a shock. And I have not even begun to talk about the possible consequences of shifting economic policy in China.

Mario Draghi, president of the ECB, promised last month to ease monetary policy if inflation ended lower than expected…But another smallish rate cut is not going to be enough. Monetary policy has many direct effects, for example on the stock market, but its effects on the price level takes time. A rate cut of 0.15 percentage points could never make the difference between deflation and price stability. The ECB will have to do a lot more heavy lifting to prevent deflation. I am not sure that we will see a sufficiently forceful response. And it has already left it rather late.

What is really troubling is that allowing inflation to drop and hold at its current level has already produced a type of deflation.

This is clearly not an intuitive result. It means that when inflation expectations fall permanently, the value of existing debt rises – even if no new debt is incurred. We do not have to get to zero inflation to find ourselves in trouble.

Munchau isn’t the only commentator getting a tad nervous. SocGen issued a worried report over the weekend, as reported by Business Insider:

Following a week of extreme volatility in emerging markets, many wonder if we are now heading for a perfect storm, with China increasingly sucked in and Europe’s already low inflation falling further towards deflation. The current developments also mark a shift in markets’ focus on where the need for policy change is the greatest – away from Europe where bond spreads remain resilient. We remain unconvinced, however, that the reforms to date in Europe are enough to raise growth sufficiently and put public debt trajectories on a sustainable path.

This is also implicit in recent papers discussing how to deal with bailouts and debt restructuring in Europe (see for instance the Bundesbank). Notwithstanding the current signs of a genuine cyclical upturn in Europe, we fear that the lack of growth-enhancing reform will soon again show up in disappointing nominal growth.

Now some analysts, like Gavyn Davies, remain relatively sanguine, pointing out the the emerging markets crisis of the later 1990s produced only short-term disruption in advanced economies. That considerably underplays the dodged bullet of the LTCM bailout. But more important, as reader Scott has stressed, emerging markets were just over 30% of global GDP then versus roughly 50% now. It’s hard to imagine that if half of the world’s economies are in mild to severe distress that the rest of the world will get off scot free.